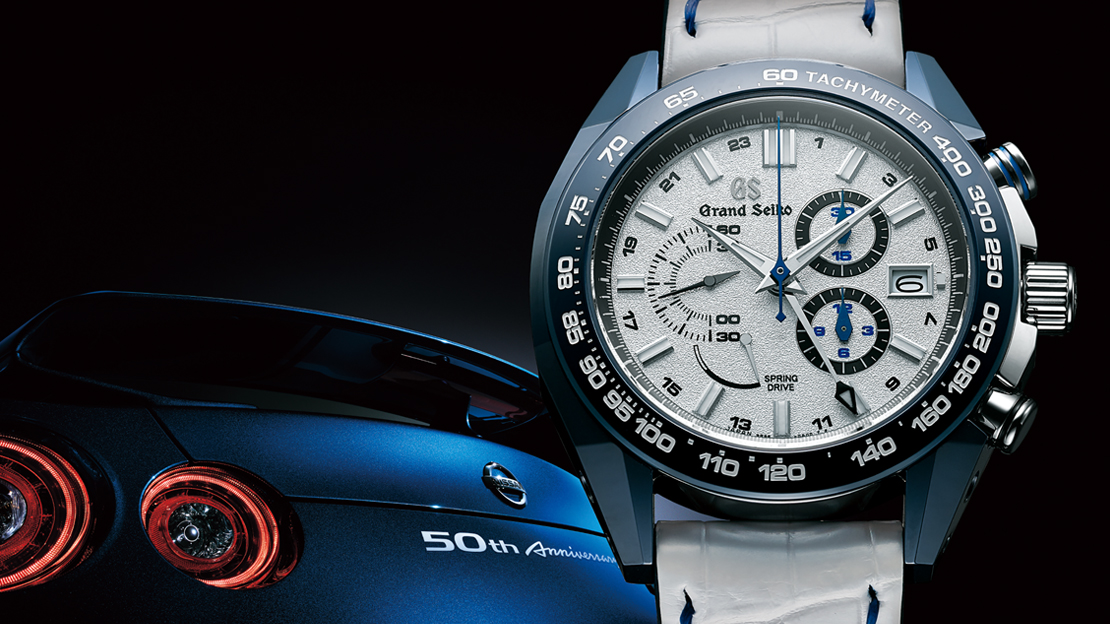 BORN 30 years apart and yet they share the same capacity for high performance and accuracy; these are the tech-laden Seiko Spring Drive and the Nissan GT-R.

The Spring Drive, of course, is the brainchild of Yoshikazu Akahane of Suwa Seikosha (which later became part of Seiko Epson). In 1977 the engineer and his team began fiddling with this revolutionary machine which fuses the conventional bits of a mechanical watch movement — mainspring barrel and gear train — with an electronic regulator ticked by a quartz pulse. It took another two decades for Seiko to publicly announce the existence of the Spring Drive. After which, the watchmaker presented it at the 1998 Basel Watch Fair, before finally debuting it in 1999 within select Credor pieces — which were only available in Japan.

For its part, Nissan’s GT-R appellation first appeared in 1969 on a high-performance version of the carmaker’s Skyline, designed by Shinichiro Sakurai. The original car, built until 1972, was introduced as a four-door model at the 1968 Tokyo Motor Show. The “Hakosuka,” as fans have since endearingly called it, was replaced in 1973, although only 197 of these second-gen models were built (by contrast, 1,945 Hakosuka GT-Rs were made).

It would not be until 1989 for the third-gen Skyline GT-R to arrive. The R32, as it came to be known, was intended to compete in Group A racing from the get-go. This motor sport bias spilled onto the succeeding R33 of 1995 and the R34 of 1999-2002. From among these models came out numerous other variants whose road and track capabilities varied from one another. By the time the three model generations bowed out, more than 72,000 examples of the cars were produced, over half of which were R32s.

The GT-R had discarded the Skyline in its nameplate by the time the R35 debuted in 2007 (also at the Tokyo Motor Show). As the case had been with its last three predecessors, the R35 spawned numerous other renditions ranging from more luxuriously kitted versions to downright racetrack tormentors.

At the 2019 New York International Auto Show (now held in April, by the way), Nissan unveiled the 2020 GT-R 50th Anniversary Edition whose exterior is characterized by unique stripes, badges and wheels. The GT-R’s signature blue color returns, now matched to a white stripe. The car in pearl white gets a red stripe, the silver one a white stripe, too. The anniversary car’s cabin features a muted gray palette, Alcantara trim pieces, special stitching and unique steering wheel and shift knob wrappings. The car will land in showrooms in a couple of months’ time.

To celebrate both the 20th anniversary of the Spring Drive and the 50th of the GT-R, Grand Seiko released a commemorative piece spun by a Spring Drive chronograph and GMT calibre and which is housed in a ceramic case. To be available in June at select Grand Seiko and Seiko Boutiques (and some retail partners), the watch is limited to only 200 examples.

Referenced as the SBGC229 (its official name is a rather cumbersome Spring Drive 20th & Nissan GT-R 50th Anniversary Limited Edition), the watch adopts the Bayside Blue paintjob for which generations of the GT-R have been known. Actually, wearing this color is the watch’s ceramic outer case, which then wraps over a titanium inner case. Ceramic, of course, is favored for its utter resistance to scratches, something that can’t be said of titanium (which, in turn, is quite light).

Though the watch escapes the PlayStation vibe of the GT-R’s multimedia interface — it was designed by Gran Turismo maker Polyphony Digital, after all — its layout is still busy. Two sub-registers ringed by black minute tracks, one at 2 o’clock and the other at 4 o’clock, indicate the 30-minute and 12-hour chronograph counters. Placed at 9 o’clock is an additional stopwatch with 60- and 30-second retrograde counters. Below this display, at 7 o’clock, is a power reserve meter.

Indicating the SBGC229’s GMT function is a fourth hand with a blue arrow tip. This hand, which like those for the minute and hour is Zaratsu-polished, points to the 24-hour scale inscriptions placed between the 12-hour applied bar indices. A date window sits at 3 o’clock, finishing the subtly textured silvery white surface of the dial. Matching the blue ceramic bezel printed with a tachymeter scale are the blue minute track of the inner bezel, and the blue hands and numerals for the two chronograph sub-registers.

To mimic the blue-and-white livery of the 50th-year GT-R, the SBGC229’s 46-millimeter-wide case is combined with a white leather strap that has blue stitching. Sapphire crystal covers seal the watch on top and at the back.

Peeking through this glass cover at the back is Grand Seiko’s self-winding cal. 9R96, a 50-jewel Spring Drive chronograph GMT movement that’s reckoned to store power enough for 72 hours. This calibre has been tuned to gain or lose no more than half-a-second a day; well, it should lose or gain no more than 10 seconds in a month. So, no question, this is one high-performance machine.