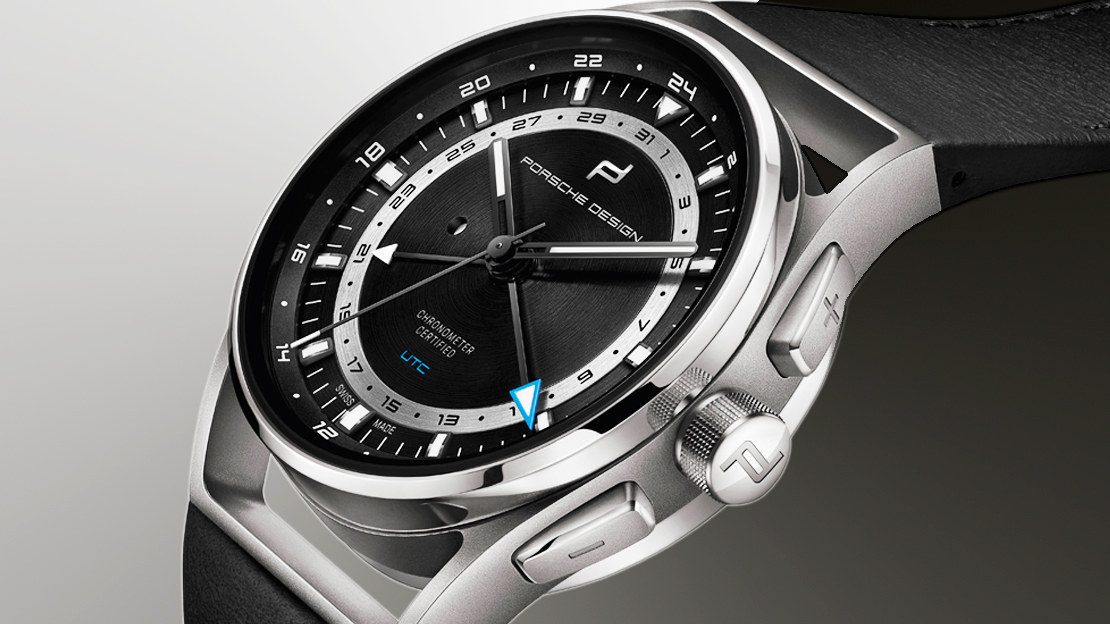 FORMING Porsche Design’s 1919 Collection are minimalist, lightweight timepieces, the brand’s equivalent of pared-down Porsche sports cars. Where the road-going machines are fitted with fabric door handles, their wrist wear brethren get hollowed-out lugs. This less-is-more approach works for these things.

The 1919 Collection’s automotive affinity is also obvious in the chronographs belonging in it — high-performance driving craves for numerous timing functions. Such purposes require added registers and hands, as well as pushers (or buttons) to set the counters. The 1919 chronograph models get all this.

Porsche Design’s four new 1919 Globetimer UTC models — set to reach the market in September — repurpose the pushers of their chronograph comrades to serve as quick-adjust tools for their world-time function. So, in another location, setting the watch to display the local time is as simple as, well, pressing a button.

It works like this: The “+” button advances the 12-hour hand clockwise in one hour increments to show the local time — perfect in cities east of London (the acknowledged “0” hour mark). The “-“ button does the same, only it moves the 12-hour hand counterclockwise. This readout applies to cities west of the British capital. The minute and second hands are not affected by the setting of the 12-hour hand because the winding crown need not be pulled out. Easy.

Like in the majority of world-time watches, the time zones of 24 cities are listed in the 1919 Globetimer UTC. Only in this watch, the list is engraved on its caseback, not on the dial (or bezel). The result is a look that is as tidy as that on other 1919 pieces.

Because the wearer must be able to determine if the setting for the local time is a.m. or p.m, the 1919 Globetimer UTC provides an aperture on its dial which displays a white dot to indicate daytime hours, and a black one meant for nocturnal ones. The 24-hour scale runs around the periphery of the dial, just above the indices for the 12-hour scale. Nothing confusing here as well.

Placed below the 12-hour indices is a date track. Pointing the date is a thin hand with an arrow tip. The date display is linked to the local time, and so would automatically move forward or backward when necessary. Indicating the home time is a similar arrow-tipped hand, only this one is longer, extending farther toward the hour indices. Mistaking it for the date pointer really should not happen.

As can be expected, SuperLuminova coats some of the dial furniture, particularly the hands, to aid in low-light readings. Sapphire crystal covers the watch on top, the crown screws down into its sealed position.

Porsche Design built a new ticker around the venerable Sellita cal. SW 200 to power the 1919 Globetimer UTC. Called the cal. Werk 04.110, this movement revises the Sellita engine to have its own ball-borne, bi-directional rotor and a second time zone module — which was developed for Porsche Design by Dubois-Depraz. It has a spin rate of 28,800vph and a power reserve of 38 hours. Plus, it receives COSC’s chronometer-standards nod.

The 1919 Globetimer UTC has either a titanium case or an 18-karat gold one, both 42-millimeters across. Three models are housed in titanium. A blue dial defines the model whose case and bracelet are both made of titanium, while black or brown dials are matched to titanium cases with leather straps. The gold piece wears a black dial and a leather strap.

While all of these combinations are attractive, these are but icing on the cake. Because the true beauty of the 1919 Globetimer UTC lies in its elegant solution to the world-time complication. It’s as simple as that.