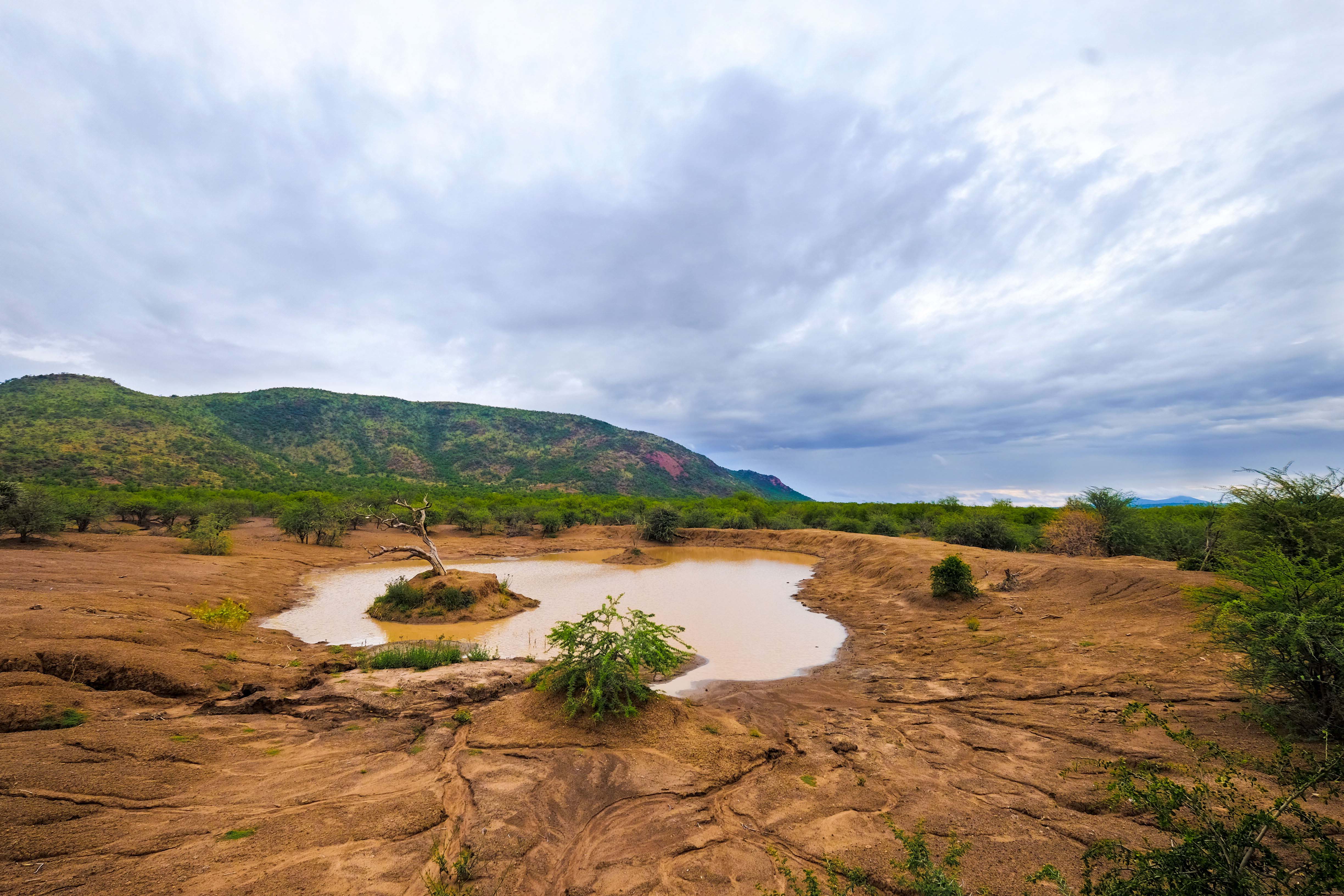 Photos by Bert Fourie and Author

I had a day and a half in between two scheduled events on two different continents, and at first I figured I would just stick myself in a hotel room and catch up on work and possibly find the nearest shopping area. My first thoughts were that one extra full day would not give me enough time to do what everyone says you should do in Africa. A safari.

However, I figured that I really did want my kids to see a world that was too-quickly disappearing and this was an awesome chance for a recce. I was flying into Johannesburg, South Africa around 36 hours before I needed to be doing something else relatively fun (driving the new 911 Turbos on a legendary racetrack) and started doing a little homework. I am not one for tours and tour guides, as I generally want to figure things out on my own and benefit not just from the experience but also from the possible savings. In this case though, I shot off some emails to a few places and tour guides in South Africa to see what I could find. Interestingly, my first choices didn’t really answer back right away and I ended up chatting with a guy named Rudie Prinsloo. I told him my time constraints and my desires to see something that would be good for the kids later on but not too isolated from the real world around it. I basically decided to go with his suggestions, and what I ended up with turned out to be spot on.

Rudie runs bespoke tours in South Africa, and after giving me some suggestions and combinations I decided that basically I wanted to get as much safari time in as I could as opposed to visiting other tourist spots. This ended up with a program that got me from the airport to a lodge in time for an afternoon drive. The next morning I would have another drive before heading into Johannesburg for my other appointments. Rudie and his wife picked me up in their own car just outside the Johannesburg arrivals area, and we moved out immediately. We were headed for the Tambuti Lodge, which was one of several located in the Black Rhino Game Reserve which is incorporated into the Pilanesberg National Park on the northwestern part of the country. This isn’t one of the larger or more famous reserves or parks, and at first I figured I should just be happy with what I could get on such short notice and with such limited time. At least it was marked as Malaria-Free, which meant I would be more comfortable bringing the kids on a later visit.

I had told Rudie that I didn’t exactly like big lodges and antiseptic experiences, that I was more interested in seeing more personal places. He suggested for me the Tambuti Lodge, which is run by yet another husband and wife team, Bert and Maritza Fourie. The couple actually met in a lodge outside Pretoria, and decided to make the safari life part of theirs. He runs the game drives and maintains the infrastructure, she handles administration and reservations. What is clear is that there needs to be a true love of the country and the wild and the desire to share it in order to survive and succeed. This held true both for the Fouries and for Rudy as well, who would point out the property that he himself hoped to acquire to create his own lodge. I only met Bert when he stopped what he was doing to help me take photos, and I didn’t know he ran the place until much later. He was clearly just happy to help others have the fullest experience. “The moment this becomes just a job you will hate it,” he would later explain to me, “It is a love of dealing with people every day and at the same time having a passion for all nature and wanting to share it.”

The sharing generally meant the game drives. Tambuti Lodge is enclosed, though not visibly once you get past the gates. There are other lodges and experiences that can be more open to the wild, and that can sometime mean waking up to find wild animal tracks outside your door or tent flap when you wake up. There is a reason the lodges take child age requirements and behavior rules very strictly. The game drive is a ride through the bush in a purpose-built open truck, and it can be several hours long. Everything is quite safe, and there are provisions and communications systems in place should they be needed. It is a fluid journey, as your direction is determined by what you see, what may have been sighted elsewhere and what the weather is like. You sometimes see photos of a herd of trucks with tourists in them surrounding small animals, but we saw none of that here. We came across a pack of wild dogs lazing under the shade of a tree, and this was apparently rather unusual to be able to watch over them so easily. There were rhinos later, including one that just decided the pathway was his and wouldn’t move. Then later when he did move he decided to follow the truck for a while. The guide with us pointed out the blood on his horn, signs of a recent battle. Other sightings that day included much deer. We stopped for afternoon tea and wine at a watered area that animals would frequent and which was set up so humans could watch without disturbing them, but none showed themselves that day. The guide explained that there would usually be more to see in the mornings. There were two couples with me on this drive, and they said that they have done several safaris in the past and were quite please by the proximity to the rhinos and wild dogs.

The next morning, sadly, brought pouring rain. The evening had been clear and pleasant, with nice chats beside the fire and well-prepared meals of both native and continental fare, and talk of plans for the following day. I woke to the heavy downpour, and walked (now thankful for the covered walkways) to the main house. I was fine to go out in the rain if needed, as this was a chance I did not want to pass up. The guides however said no, and they would call the rooms if it looked better.

They did call, and everyone rushed out to the truck. We left the lodge just as the rains were lightening up, and it was a long quiet ride through glistening brush but no signs of animals. Then we began hearing sounds, and we started seeing birds. It turned out that just after a rainstorm was a wonderful time to go out. We first came across a few solo buffalo, then several small herds. The wild dogs starting coming out, then we came across several groups of Zebra complete with playful youngsters bouncing around their parents. It was mesmerizing to watch, especially when you would have different species within close proximity to each other. As we continued on, we watched a single elephant slowly making his way along a path beside a hillside. After watching a while, you saw that he wasn’t alone. More rhino, this time in batches, playing in the mud. And more elephants though the large pachyderms tended to stay further away. We started seeing the heads of giraffe peeking through the trees, which was quite fun to look at until we rounded a corner and had them standing just beside the road staring at us. They seemed quite appreciative of the rainfall, and were happily chewing away at the moist leaves. The most playful to watch were the groups of wild boar, bouncing along at speed and playing. The most surprising, and happily calm, was the pride of lions. Our guide had said, ”Let’s go here, sometimes things hang out under that particular tree.” Then he asked if we were all ok with getting a bit close. There, under the lone patch of brush and tree in a flat field, was one male and three female lions. At first they all stared at us, then when they decided we weren’t particularly dangerous they took turns keeping an eye on us. The guide kept the truck pointed outwards, and we didn’t stay long. It was a surprising encounter, with the beasts lazing around but obviously paying attention. The people were more tense than the animals at first, but it was actually very relaxing after a while.

“The look of people’s faces the first time they see the beauty of the country and that of the wildlife is absolutely amazing and makes every day worth it.” 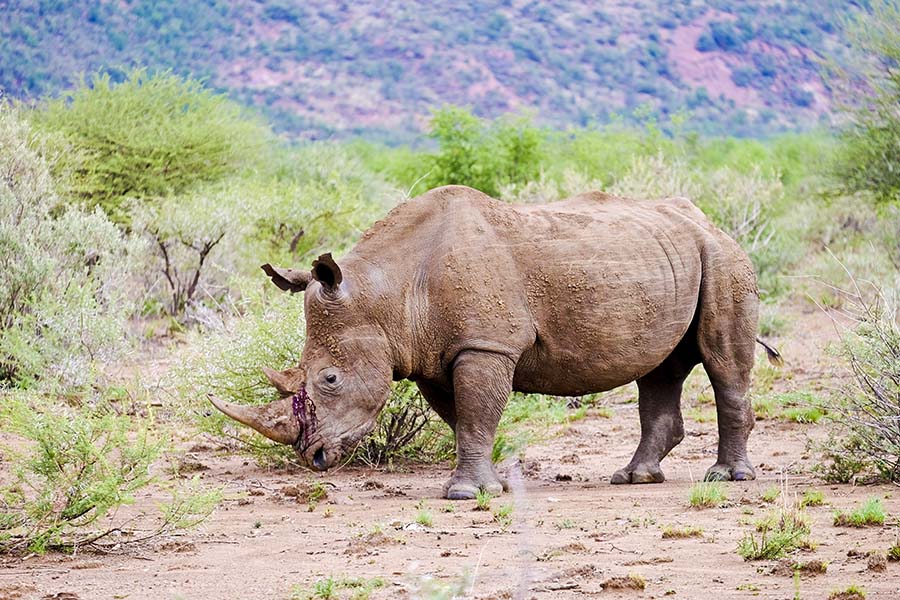 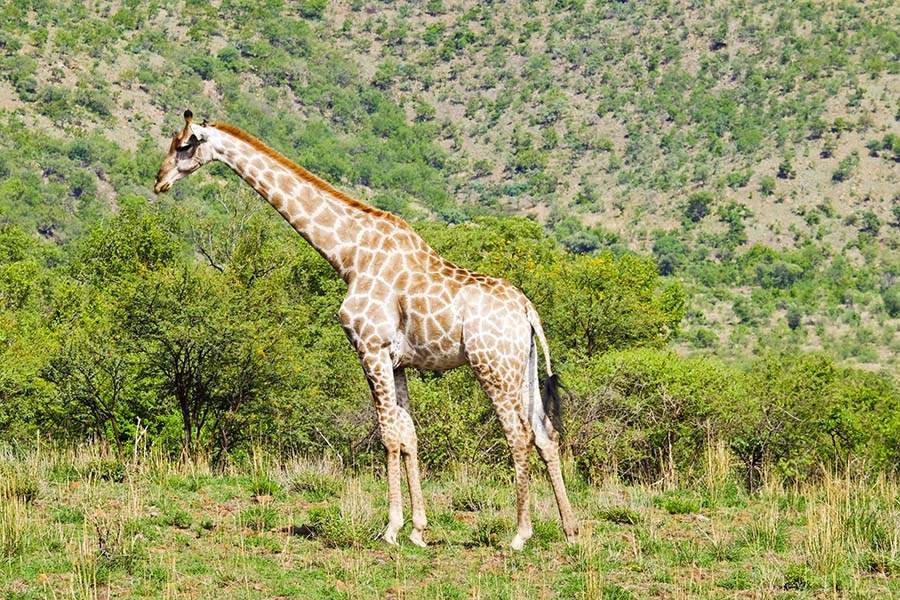 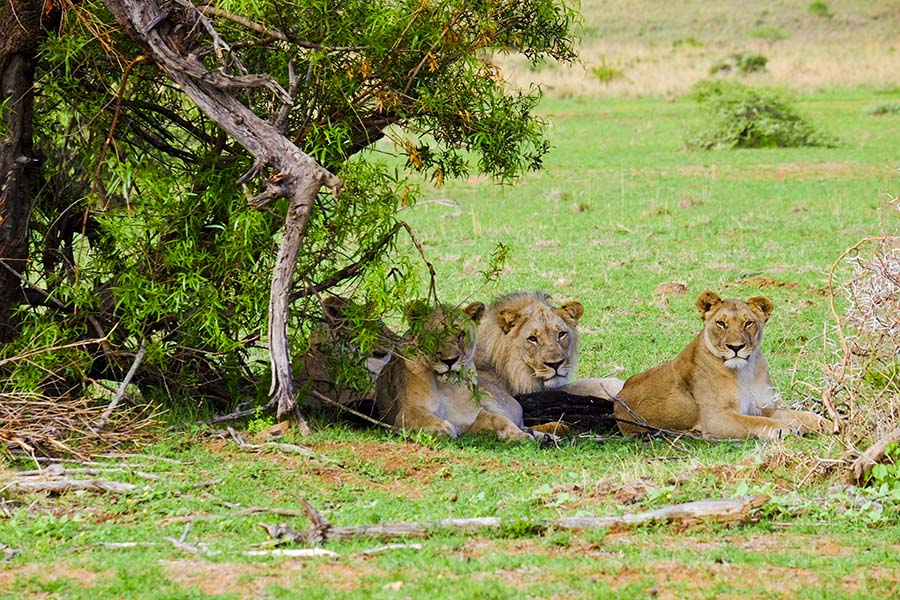 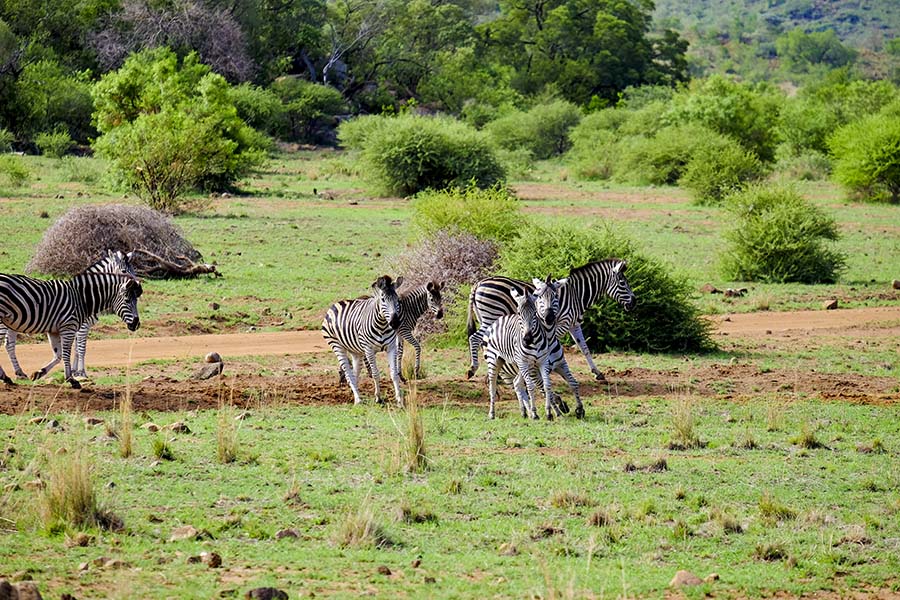 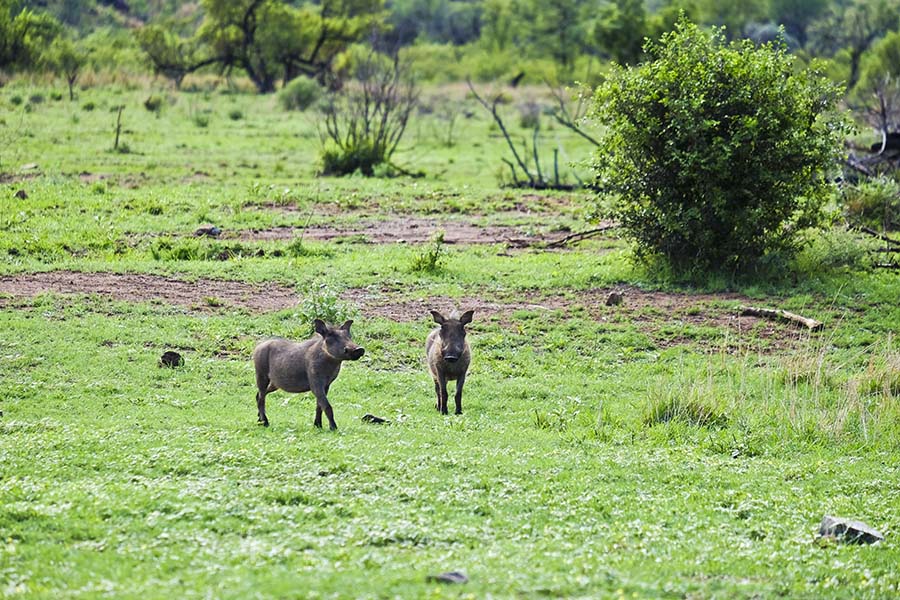 Pretty soon the sightings were almost commonplace. We had in one morning drive seen four of the big African five, with only the leopard not making an appearance. All the sightings were up close with the exception of the elephants which didn’t come closer than a football field away. We did see the white rhino, but not the black from which the park takes its name. We scouted for hippo but had no luck. Speaking later with other safari companions gave the impression that we were very lucky, that they more than once spent days in the larger parks and would see less or be further away from the animals. What had started as an attempt to “take what we could get” with a short, quickly-planned run into the nearest wild turned out to be an unforgettable one-day trip. As Bert Fourie said when we left, “the look on people’s faces the first time they see the beauty of the country and that of the wildlife is absolutely amazing and makes every day worth it.”
More time would have been great, and the pace in other more well-known parks and reserves can be a combination of forced relaxation and hurried rushes when there’s a sighting. In the case here, a couple hours away from a major city and airport, the twenty four hours detached from most of humanity didn’t bring a slowing of the normal pace of your life. There wasn’t time. But clearly it proves that you are able to put an amazing experience together in the amount of time that might normally just be dedicated to a shopping trip.