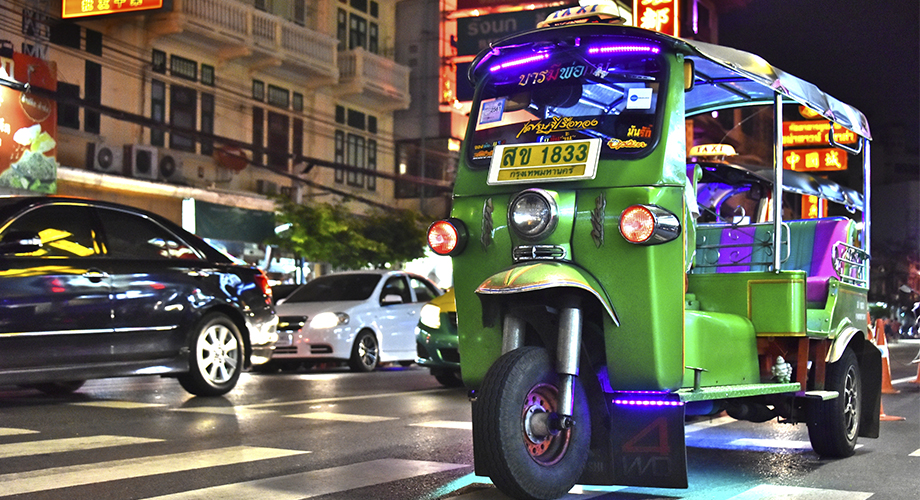 There’s a first time for everything, I told myself, as I walked through the thick, steamy Bangkok night air. Sweat beads formed on my forehead, but I smiled at my husband Marc with giddy excitement. We were booked on a Tuk-Tuk Urban Food Odyssey Tour in this bustling city, about to cruise around on a Tuk-Tuk, an auto rickshaw motorbike with three wheels, while stopping to eat like the locals. I jumped straight in and prepared myself for a unique, cultural adventure.

We sped along in and out of traffic to our first stop, Joke Sam Yam, a local diner filled with customers all there for one reason: the most popular Thai congee dish in Thailand, an uber-tasty version of rice porridge with pork, egg, green onions, and ginger, quite similar to our very own “arroz caldo”. After slurping up the yummy dish to our heart’s content, we took in the lively atmosphere and the shared love for food.

Next, we sampled the best crispy “gai” (chicken in Thai) noodles, as well as witnessed the flaming process behind cooking it. Ann Guay Tiew Kua Gai’s main chef remained calm and cool despite flipping the noodles and chicken on top of a huge, bursting flame in a clay pot. I was mesmerized, and as the dish got served, needless to say, I was in chicken seventh heaven.

Afterwards, giving our tummies a bit of a break, we headed on over to the Bangkok Flower Market. Open 24 hours with the colors and alluring scents of different flower varieties, we learned how to fold Lotus flowers properly. As we were admiring the flowers, our guide Aoy asked, “Would you like to see the temples now? They are beautiful at night. I have a surprise for you.”

Aoy’s surprise took us to the roofdeck of Arun Residences by the banks of the Chao Phraya River. Wat Arun (also known as the Temple of Dawn) lay in full view on the river’s opposite end. Completed in 1656, its Khmer-style tower encrusted in porcelain shone stunningly at night. We all lifted a toast to its beauty, before walking over to Wat Pho, one of the city’s oldest and largest temples in Rattanakosin, the old royal district. Home to more than 1,000 ancient Buddha images, a sense of Zen surrounded us inside the temple grounds on that full moon night.

Saving the best for last, our most unforgettable meal of the night came as the clock neared 10pm and we headed to the best Pad Thai restaurant in all of Bangkok. The long line of people (locals & foreigners alike) at Pad Thai Thipsamai told us we were in for something really special. Delicious to the last drop, the pad thai was the perfect cap-off for the night. This was our first night in Bangkok, and we experienced a tour for the taste buds, the soul, and the mind. Surely, it’s not to be missed.

*Tuk-Tuk Urban Food Odyssey Tour can be booked at http://www.tasteofthailandfoodtours.org/events/tuk-tuk-urban-odyssey/

An Audi Sport Quattro S1 and other legendary Group B rally cars up for auction by Artcurial.

The Audi Sport Quattro, The greatest monster of them all.

The new Porsche Panamera is all about timing.

After weeks of being indoors, it is time to enjoy the beautiful summer days. OMEGA brings us a collection perfectly designed for style and protection.

The Lamborghini Sian Makes Its Way To LEGO®

LEGO® Technic™ releases the Lamborghini Sián in a 1:8 scale.