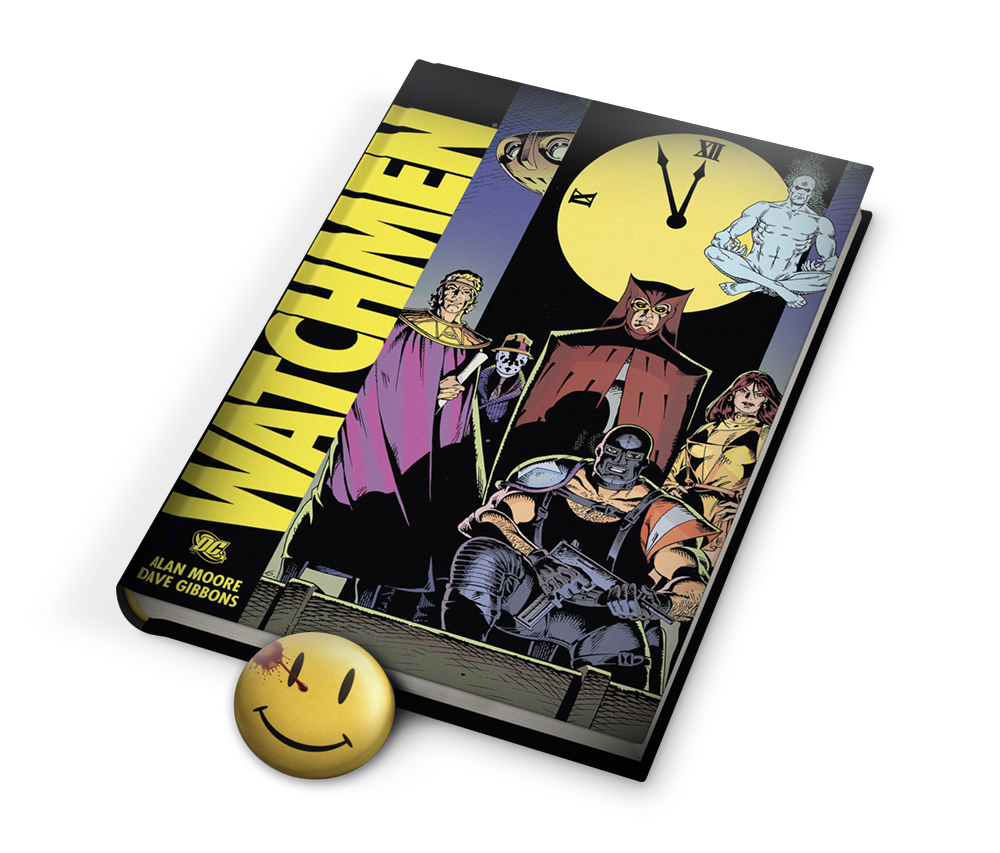 Alan Moore is arguably the greatest comic book writer of all time, although in more recent times he might have taken issue with even being one. So when one says that “Watchmen” is his greatest achievement, that’s setting a pretty high bar. But then again, as far as most people are concerned, it has never been equaled as a work within the medium, so it’s not only Moore’s greatest comic, it’s ANYBODY’S greatest comic.

The graphic novel “Watchmen” came out in the late 1980s, the creation of writer Alan Moore and artist Dave Gibbons. At the center of it, it’s a murder mystery set in a world where super heroes are real. One of the heroes has been killed, and another sets out to discover why. That’s the beginning of the story, but as it unfolds over twelve issues, it covers the backstories of the heroes, the literature and mythology of the time, and all the events that led up to a modern time (in the alternate-reality) where heroes are real, Dick Nixon is still president (and has been for decades) and the world is on the brink of nuclear war. In this setting, the heroes – Rorschach, Nite Owl, Dr. Manhattan, Silk Spectre, and Ozymandias—are all struggling with the question of their dead comrade, The Comedian.

“Watchmen” has been a success ever since it came out, but the general consensus was that it was impossible to make a movie out of it that would capture all the nuance, the mood, the detail, and the personal investment that characterized the graphic novel. However, in 2009 Zack Snyder took a swing at it… and in truth, it wasn’t half bad.

Alan Moore himself said that “Watchmen” is nigh-unfilmable. People had been trying practically since the book hit the shelves. Zack Snyder, fresh off the success of “300,” made a version that was nearly obsessive in its faithfulness to the comic. Some people felt it was a mistake; but given the unparalleled success of the source material (and comic fandom’s well-known and often slavish devotion) a page-perfect recreation may have been the best way to go. At the very least, no one could accuse Snyder of incorrectly interpreting the graphic novel, since he practically rebuilt it shot for shot.

One reason the film may have been viable at all is that it contained virtually no mega-stars in the cast. The budget was appreciably lowered thereby. Still, the casting went pretty well for all that. Probably the best hit on that front was Jackie Earle Haley’s Rorschach. The Comedian may have been sadistic, Dr. Manhattan may be inhuman, but Rorschach’s past is the truly disturbed one, and Haley captured both the sallow unattractiveness and the uncompromising judgement of the character, whether in a mask or out of it.

Still, however you feel about the film, the “Watchmen” graphic novel remains untouched at its peak. It’s still perhaps the finest example of how the graphic novel can achieve things that no film, or even novel, can. If there’s a comic book that speaks for the best achievements of all possible comic books, “Watchmen” is the one. Read it, if you haven’t already.

While We Were Apart

Life In the Margins

A young man gone, but not forgotten.