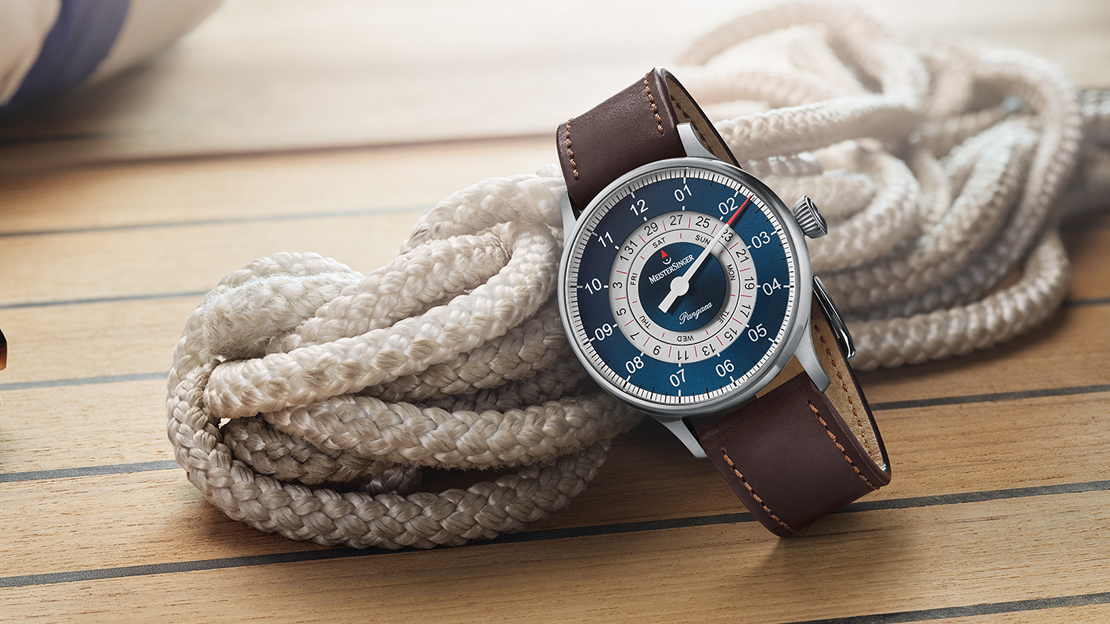 TUCKED in corners above the massive main hall of Messe Basel during Baselworld are the booths of some smaller brands, those which build no less interesting — all right, in a few cases even more interesting — timepieces. An example; watchmakers from the AHCI, or the Academie Horlogere des Createurs Independants, can actually be seen working behind tables (and maybe a display case) in an area buried behind a maze of other exhibitions. And yet we are talking here of some of horology planet’s most talented. At the last Baselworld, for instance, Konstantin Chaykin had a table about, oh, maybe 10 paces or so from where Hajime Asaoka was crouched over his.

And then there are brands which are relatively mainstream, and which make great but accessibly priced timepieces. Like MeisterSinger, which at the last Baselworld brought out one compelling watch after another. Among these was its updated Pangaea Day-Date.

The Pangaea Day-Date first came out in 2013. Since then it has turned into one of MeisterSinger’s most successful offerings. What the watch has been known for is its clever display of calendar functions; its day and date discs are not hidden behind the dial, with the set day and date appearing only through an aperture, as practice usually is. In the Pangaea Day-Date, these discs are in full view near the center of the dial. A red arrow below 12 o’clock, placed on the inner periphery of the discs, indicates the day and date. Simple. Cool.

As a Meistersinger, this neat calendar function is paired to single-hand time-telling — the brand’s USP. MeisterSinger pitches the single-hand watch is for people who do not worry about the passing of each minute, but who simply want to keep track of time. What this is, essentially, is a more relaxed way of timekeeping.

In the updated Pangaea Day-Date the rotating discs no longer come in the same color as the dial within which these were set — only a slight step from the dial’s surface was what used to distinguish them from the dial itself. Now, the discs are rendered in contrasting hues, setting them apart distinctively, and better identifying their functions rather these merely blending in with all the other dial furniture.

Two reinterpretations are offered. The first comes in a dark-on-darker combination where the dial is in steel blue with a sunburst pattern while the day and date discs are in matte black. The black part is then repeated on the periphery of the dial, providing another visual layer. The contrast is discreet, but a contrast nevertheless.

The second version is bolder, even youthful. The dial remains in the same steel-blue hue but the discs have become light-gray affairs. So now the combination is light on dark, which necessitates the markings to come in black and reverse as well. A light gray second track then frames the dial. Mixed with the various red touches (tip of the hand, day/date indicator arrow, “sector” markers of the day/date inscriptions), the resulting look is dynamic but tidy.

Whichever dial design is picked, beating beneath it is either an ETA 2836-2 or its clone, the Sellita SW 220-1. Both self-winding, either movement spins at 28,800vph and has a 38-hour power reserve. They have received bits of décor as well; the rotor, for instance, is engraved with MeisterSinger and its logo.

Housing the sundry elements found on both updated Pangaea Day-Date versions is a 40-millimeter-wide steel case with a screw-on exhibition caseback. Cordovan leather straps in cognac and dark brown round out the aesthetics of these lesser known, but quite compelling watches.