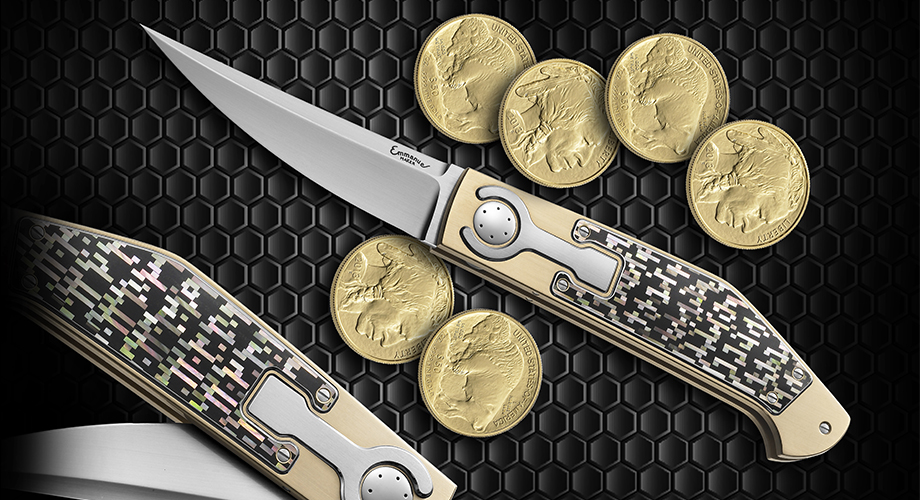 On this particular March day Emmanuel Esposito is not in his workshop in Turin, Italy, hunched over some machine, basic tools in hand. On this intermittently overcast and sunny mid afternoon, he is garbed not in work clothes but in a tailored light-color suit, and is sitting behind a table on a corner inside the booth of watchmaker Urwerk.

The setting is Baselworld 2019, where Urwerk occupies a spot at the Les Ateliers — the trade fair area reserved for some of the best independent watchmakers on the planet. Here, haute horlogerie is the order of the house as each of the admittedly few companies present explores the possibilities of how far horologic craftsmanship and innovation can be pushed. Then pushed further still. The space is truly an intersection for high art and high engineering.

Signor Esposito, however, is not a watchmaker. Rather, he makes knives. Or, more to the point, he makes cutting-edge sculptures that fuse high art and high engineering. His presence in Les Ateliers is only apt.

Born near Turin in 1983, Esposito is a certified star among a small constellation of haute knife-makers. He relates he was practically raised in his grandfather’s workshop where he learned at an early age to “transfer ideas” into an actual object he made using his own hands.

At 15 he started developing an interest in making knives. After experimenting with making one, he also began subscribing to books and magazines catering to the subject. At around this time he also attended his first knife show (which was held in Milan). One could say this experience was his first cut; his passion for knife-making simply grew stronger. A few years soon after, Esposito had signed up to be a member of the Italian Knife Makers Guild.

“I started making fixed blades, but soon moved on to integral and then to folding knives. In folders I found that I could really explore my interest in combining intricate mechanism with aesthetic design,” Esposito bares in a post on his website (www.emmanuelesposito.net).

Following an appearance at the 2008 East Coast Custom Knife Show in the US — a gig that proved pivotal to his career because his bold, original designs drew international attention — Esposito in 2010 had evolved into a full-time knife-maker. By this time he had more or less created a style that’s identifiably his, not to mention securing a patent for a locking mechanism. Called C-LOCK, Esposito’s take on the conventional ball bearing pivot system guarantees the folder blade will not bend or yield to pressure regardless of how the knife is held.
Recognitions have piled on since. Esposito’s works have clinched best folder awards in 2010 and 2011 at the Chicago and Milan gatherings, and Best of Show at the Solvang event in 2012. His credentials have also landed him on the roster of some prestigious groups, the San Diego Art Knife International organization among them.

Largely marking out Esposito’s works from those of his few peers is the use of modern materials, like carbon-fiber and other exotic alloys, mixed with traditional ones, such as gold and mother-of-pearl. The shimmering, multi-hued mosaic artworks lavished on the knives’ handles have become Esposito’s signature touch as well — these mosaic inlays in unique patterns take on different dimensions and colors depending on the angle at which they are viewed, thanks to the reflective qualities of black lip pearl, mother-of-pearl and gold set against a carbon-fiber backdrop. Of course, the technical wizardry inherent on his designs is as much of an attraction as the aesthetic bits.

“I make everything, including the screws I use. If you see my workshop, it looks like a watchmaker’s workshop, with all the lathes and special tools,” Esposito says in Baselworld, as he presents his latest creation — a one-off knife to match a one-off watch.

Esposito, who admits he makes “only around 10 knives in a year,” has just finished his T8 Collibri knife, which accompanies in a boxed set Urwerk’s UR-T8 Collibri watch. Inspired by the feathers of a colibri — French and Spanish for hummingbird — the predominantly gunmetal-gray finish of both the timepiece and knife are subtly livened up by a mosaic created with black lip pearl connected by 18-karat gold pins and set against a Bakelite frame. In the knife, made of steel, the mosaic is applied over the handle and the spine of the blade. The knife is not a particularly big piece, maybe just a little over four inches long, but its exquisite mix of craftsmanship and material is theatrical, especially when it is presented next to the Urwerk watch inside a box — which aptly serves as a stage.

Esposito says he and Urwerk decided to collaborate on the unique watch-and-knife set with no particular client in mind, preferring an artistic rather than a purely commercial pursuit. But, then; “It was already sold this morning,” he says as we examine the art pieces.
Esposito, it seems, will have to go back to his workshop soon.