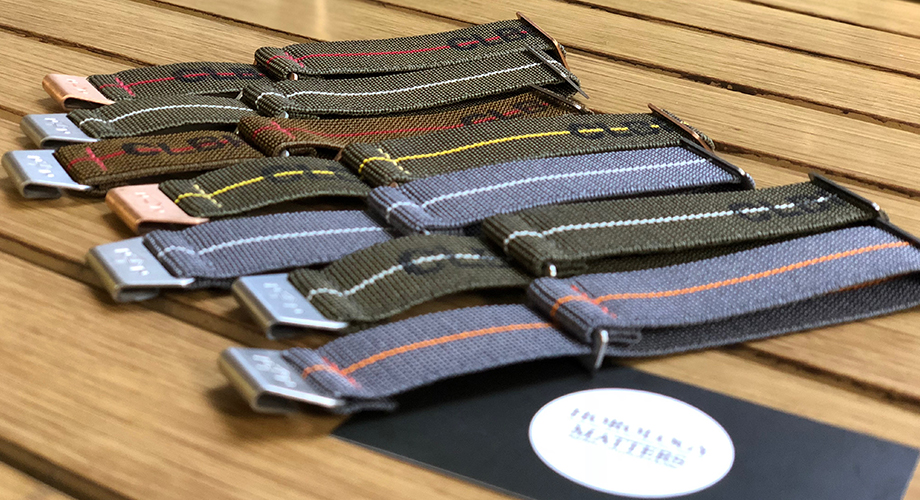 As always, it’s the things born out of necessity that are the most enduring, their eventual ascent to coolness belying the grit amid which they were devised. From denim jeans to work boots, knives to motorcycles, the list of such stuff is extensive, but each one of them carries a utilitarian past which over decades has turned all romantic.

A chunk of this stuff comes from a military backdrop, one of which is the once lowly fabric strap for watches.

A great example is the G10 — short for the G1098 procurement form — watch issued by the British Ministry of Defense, which starting in 1973 came with a fabric strap. The idea for the use of the fabric strap was that even if one of the watch’s pins broke, the watch will not come off the wrist. This strap originally came in any choice of size and color, provided these are 20 millimeters and Admiralty Grey.

Less ubiquitous, but also arguably cooler, is a strap used by the Marine Nationale (MN), or the French Navy, for the Tudor Submariners it issued to some of its men starting in the late 1950s to the early 1980s. A number of the later references of these Submariners, especially the “Snowflake” with a blue dial, were fitted by some members of the service with straps fashioned out of parachute webbing and hardware, securing these better, and more comfortably, over wrists. A development born out of a need, it was, to borrow Miles Davis’s words, the birth of cool.

It’s this same stock which Erika op den Kelder got a hold of, and which she began using to recreate, albeit with a few innovations, a line of MN straps under her own Erika’s Originals brand. Op den Kelder, who is based in Valencia, Spain, keeps to and honors the ingenious and artisanal tradition of the French navy men by hand-crafting the Erika’s Originals MN straps.

The straps are still made from parachute webbing — essentially braided nylon and latex — and are still hand-stitched and detailed. Improved are the fasteners, which have turned more adjustable. Plus, the straps now come in a variety of color combinations, all adding to the MN’s iconic green with yellow stripe.

Not cool enough? Erika’s Originals are open to working with organizations that share the same passion for military stuff and all things horology, and an excellent example of this is the brand’s collaborative pieces with Calibre and Horology Matters. One of two straps kitted to the 100-piece limited edition Seiko Prospex Turtle Bronzo project of Calibre and Horology Matters was an Erika’s Originals specially stamped with CLBR-100 — which marked the release of Calibre’s 100th issue in December 2017.

Horology Matters is the country’s exclusive distributor of Erika’s Originals. The two brand’s association started in mid-2017 when Leonard Sytat, one of the men behind Horology Matters, earlier learned of op den Kelder’s products on Instagram.

“The first strap that really caught my attention was her signature 21-millimeter green [with yellow] stripe MN strap. As soon as I checked her work, I sent her an e-mail. But due to her busy schedule and the amount of orders she gets, it took a while before we finally closed the deal and got to be the exclusive distributor of Erika’s Originals in the Philippines,” Sytat shares.

The pursuit was worth the effort as, Sytat explains, Horology Matters has to “believe” in whatever watch-related part, accessory or literature that catches its fancy before it decides to carry it. “Before we get a brand, we make sure our hearts are into that brand’s product first. [Then] we make it a part of Horology Matters,” Sytat says.

As it turns out, meeting the people behind the brand helps a lot, too — well, it certainly did in the case of Erika’s Originals. After around a year of e-mailing and dealing and selling of various models of the straps, Sytat finally met up with op den Kelder at Baselworld 2018.

“We learned a lot of things [from that meeting] and the back story of her work. We really enjoyed our chat with her; her husband was also there and we got to talk to him, too. It’s always an exciting experience for us to personally meet our suppliers as we get to bond with them,” recalls Sytat.

“She showed us some of the new cool stuff she was about to release at the time,” he adds.

A new strap op den Kelder has recently released is the “Swick.” Sytat says this was developed together with — and endorsed by members of — the US Special Warfare Combatant-Craft Crewmen, or the SWCC, explaining the Swick moniker. The strap for this unit is easily distinguishable from the MN-inspired ones as they have multiple stripes.

Certainly, the introduction of the Swick straps does not spell a shift away from the MNs. And a recent proof of this is Erika’s Originals’ introduction of a fresh set of CLBR-101 MN straps. The new ones are wider, at 24 millimeters, than the earlier renditions of CLBR-101 (20 and 22 millimeters), addressing demand from customers who want to use the strap on larger watches — Panerais, for instance.  Like the narrower CLBR-100 and CLBR-101 that preceded it, the latest CLBR-101 is also hand-made from parachute webbing and hardware, ensuring it remains as among the most comfortable all-season watch straps available in the market. Surely, the French navy men would agree.