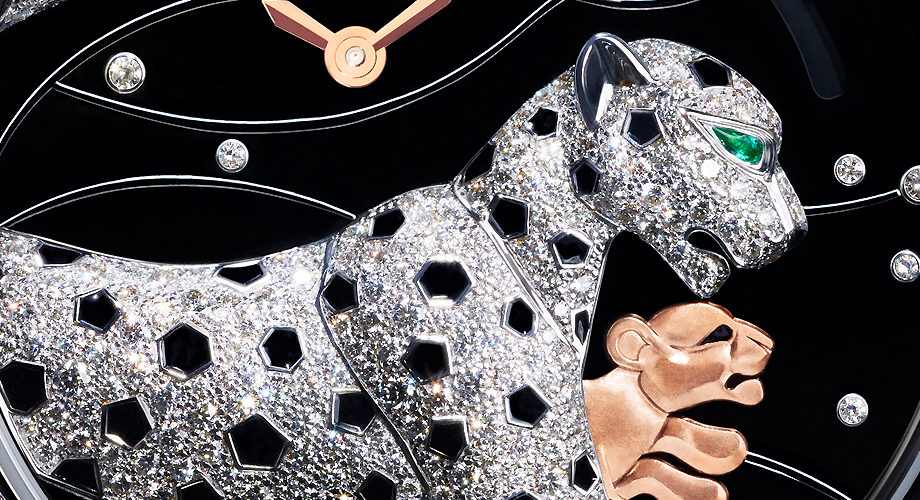 The Panther is the symbol of Cartier, perhaps their most enduring and iconic badge. It transitions from jewelry to horology, and to the beautiful blends of both that are Cartier’s contribution to the world of practical magic.

Panthers have long run through the catalogue of the brand, and it would actually be an interesting diversion to look through the many forms the cat has taken on Cartier’s products. The sheer number of them would probably dazzle you, but there have also been some really remarkable, breathtaking creations built around the Cartier cat. It would be kind of like trying to clean out your closet: you’d be focused at the start, then you’d get distracted by one particular thing or another, and pretty soon, you’d be sitting next to a pile of mementoes, all hope of organization gone and it’s three in the morning. All that, except the pile would probably be worth a billion dollars.

As Cartier renders unto us two more watches with the panther borne upon them, it is a pleasure to examine them and find the details that catch our eye and spark our emotions. I admit to having a favorite in the mysterious hours one, but there is a heart-tugging moment in the other watch that will probably curl you up with a smile.

Let us first take a look at the Panthère Mystériuse. The watch name derives from the Cartier tradition of the Mysterious Hours, that seeming illusion’s trick whereby they show the watch hands floating, unsupported, in midair. Here, too, we see the watch’s hands in a circle of glass, defying gravity.

The Mysterious Hours, it may interest you to know, is one of those enduring feats of Cartier’s horological engineering. It first made an appearance on a Cartier clock more than a hundred years ago, in 1912. As you can imagine, the sight of a clock with hands floating in midair caused quite a stir. Even today, Mysterious Hours timepieces catch people’s attention. They walk by with a glance, stop, and come closer, unable to process in their minds what their eyes are showing them.

The panther is not just set with diamonds: it IS diamonds.

On the Panthère Mystériuse, the Mysterious hours dial is watched over by the Cartier panther, seen here in full-bodied form. The panther of the piece is seemingly draped over the 40mm case, with the details picked out in gem-set relief. The eyes seem to watch the viewer; not in a protective manner, but as if assessing the potential for a next meal.

The panther is not just set with diamonds: it IS diamonds. It’s made up entirely of diamonds, and entire animal rendered in glittering gemstones. The effect is so well-done that it takes a moment to realize what it is you’re actually looking at. Then the light shifts, and you realize that the whole of the great cat, carelessly lying along the rim of the watch case, is cut diamonds. The black lacquer dots are the highlights; but the whole body of the panther is diamond.

The effect is compelling, if it’s possible to be both subtle and overwhelming in stages. The cat’s graceful relaxation is engaging enough, with that power lurking under heavy-lidded green eyes. Then the full force of the diamond body hits you, and you are left in awe of both the panther and the rendering.

The Panthères et Colibri release is one watch with two creatures on it… at first.

The watch’s name mentions a panther and a hummingbird, and both are in plain sight on the watch dial. Given the strength that panthers have, I can only say that’s one brave hummingbird, hovering near the panther’s mouth. But just like with the Mysterious Hours, there’s more here than meets the eye.

The panther is once again made of diamond and black-lacquer highlights, with those piercing green eyes. But the trick happens when you push in the winding crown. Suddenly, a little baby panther (Awwww!) springs out from between its mother’s paws, and the hummingbird zips away… to serve as a power reserve indicator, interestingly enough. It’s a delightful little interaction, but it’s also rather an intricate mechanical display. The little panther cub coming out is a constant, but the hummingbird power reserve display will vary its travel distance depending on how much power is left in the spring. Thus, it’s a complicated function that also happens to provide a miniature show for the wearer. In this, Cartier shows both their spirit and their skill.