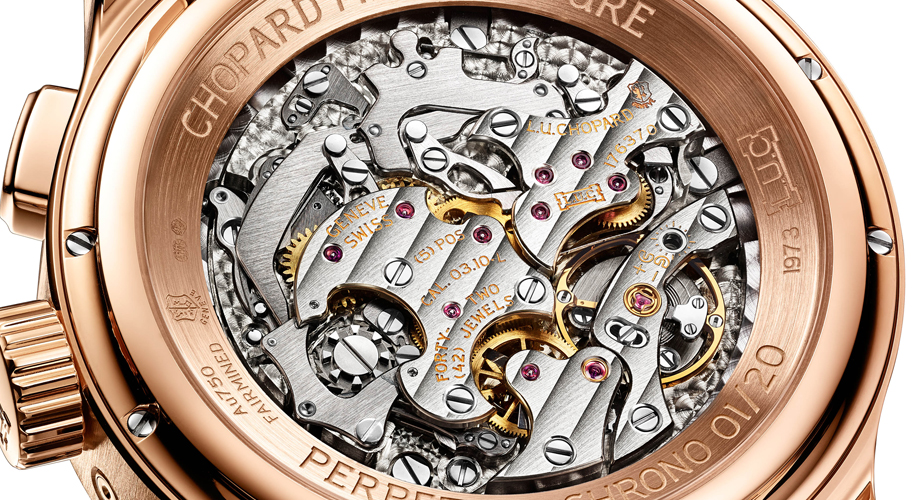 Chopard, the company, made its mark as a watchmaker when it was founded by Louis-Ulysse Chopard in 1860. Things changed a hundred years later when the last Chopard family member sold the family business to jewelry-makers from Pforzheim Germany called ESZEHA. In 1963 the company was sold again this time to Karl Scheufele, a goldsmith, watchmaker and a member of the third generation of jewelry-makers, who acquired the watchmaking company and whose family continues to own and manage it to this day.

As a result, for a number of years in the modern era, Chopard became known mainly for their jewelry first, and their watches second. To be fair, the Scheufele family is responsible for Chopard’s “golden age,” not only did they modernize the company, but with the Happy Diamonds collection, successfully integrated the jewelry segment of the business into the existing watchmaking one.

Things changed again in 1996 when Chopard introduced a new line of watches bearing the name “L.U.C” as an homage to its founder, Louis-Ulysse Chopard. These watches featured horologically ambitious movements and marked the company’s return to its origins as a producer of ultra-high quality watches. Their first movement, the calibre 1.96, was designed by none other than Michel Parmigiani and led to the L.U.C collection becoming the company’s flagship line, with a name reserved for the best and most technically advanced watches to come from the Chopard workshops.

However, because of its hard-set reputation as a jewelry maker, Chopard has had to work doubly-hard as a watchmaker, which is why this year, Chopard has released its very first, all in-house perpetual calendar chronograph, the L.U.C. Perpetual Chrono which the company is releasing in an exclusive 20-piece limited edition. And did we mention the 45 mm L.U.C. Perpetual Chrono is made using Fairmined gold?

Yes, a seldom discussed elephant in the room is the enormous environmental and social impact the watch and jewelry industries take to remain in business. Which is why back in 2014, jeweler of the stars, Chopard developed a conscience and launched the first ever watch made of Fairmined gold, the L.U.C Tourbillon Qualité Fleurier Fairmined, a watch with more than a hint of social awareness.

The FAIRMINED standard is a certification that guarantees the gold used in the creation of a particular object had been mined in a responsible manner, ensuring that the miners and all the persons involved in its extraction received fair payment as well as an overall premium, thereby demonstrating that gold can be sustainably mined. The introduction of the Chopard watch highlighted the long-term partnership between the brand and the South American, Alliance for Responsible Mining (ARM). ARM is the NGO behind the ‘Fairmined’ standard for artisanal gold mining and works in close collaboration with miners and gold industry experts.

Chopard is in fact the first luxury watch and jewellery company to have committed itself to supporting mining communities in order to help them achieve Fairmined certification. It contributes to training, to social well-being and to environmental protection. Fairmined certification ensures that gold is extracted in a responsible way by artisanal and small-scale mining organisations, that both miners and the environment are treated correctly and that purchasers pay a premium, in addition to the fixed gold price, to be reinvested in community projects.

Inside the L.U.C. Perpetual Chrono beats the L.U.C 03.10-L, which is based on the two-year old L.U.C 03.07-L movement introduced in the Chopard 1963 Chronograph in the spring of 2014. The latter features a column wheel that controls all chronograph operations including the flyback function, as well as a zero-reset system for the counters and the central sweep seconds hand handled by progressive-contact hammers guaranteeing optimal precision. This ensures smooth yet firm activation of the timing-related components via a vertical coupling clutch.

The perpetual calendar of the L.U.C. Perpetual Chrono is recognisable by its large twin-aperture date display, complemented by day and leap year indications, and finished by a day/night indication and an orbital moon-phase display. This final indication guarantees graphic and accurate readings of the age of the moon, with a mere one-day deviation in 122 years. Since the original configuration of this calendar uses the same areas as the chronograph – both involving indications at 3 and 9 o’clock – the architecture of the perpetual calendar had to be adjusted to offset the day/night indicator by a few millimetres. This arrangement determined the specific layout of the dial and its counters.

If all of that wasn’t enough, L.U.C. Perpetual Chrono also features a double certification: the first for the L.U.C 03.10-L movement, which has been chronometer certified by the Swiss Official Chronometer Testing Institute or COSC; and the second from Timelab, which administers the Poinçon de Genève, the superlative Hallmark of Geneva that certifies the watch in its entirety.

So, two timeframes, a longer scale in a perpetual calendar that will provide accurate indication for centuries, and a shorter one in a chronograph for specific timing operations. Indeed, the L.U.C. Perpetual Chrono is a pretty big deal for Chopard and is the finest example from the watchmaker yet. Best of all, the L.U.C. Perpetual Chrono is priced significantly lower than any of its closest competition. And that includes the Patek Philippe Ref. 5270 and the A. Lange & Söhne Datograph Perpetual, two watchmakers that are the gold standard in watchmaking. Not bad for a watchmaker with something to prove.