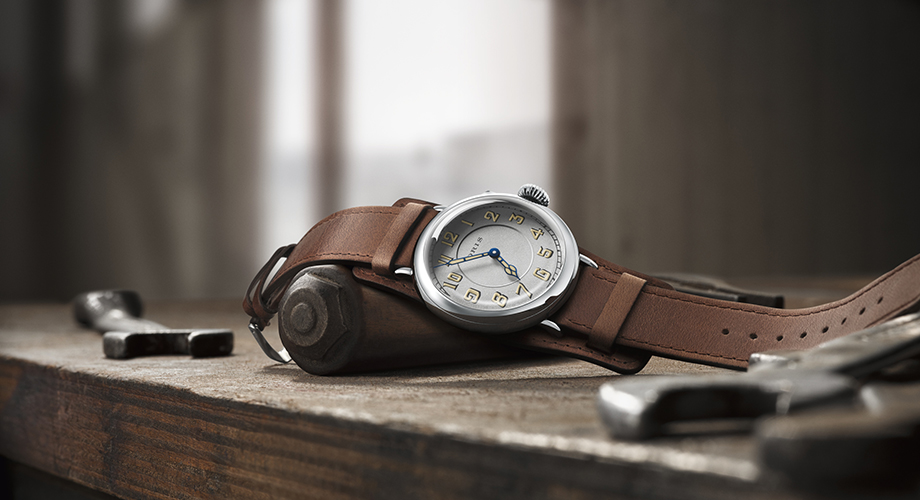 In an interesting turn of events, it turns out even Oris had something to learn from Oris’ history.

They belief had always been that Oris had made their first pilot’s watch with the Big Crown in the year 1938. Now, that’s respectable all by itself, but recent discoveries have shown that there’s more. The brand’s Hölstein archives (Oris has been operating at the same site since the year it was founded, 1904) have shown that Oris was actually making watches for pilots in the early 1910s, a good twenty years earlier at least. The archivists found a catalogue with a pocket watch that had a Blériot airplane engraved on the case. Louis Blériot was an early French aviator who first flew across the English Channel on July 25, 1909. This noteworthy event may have accounted for the use of the Blériot airplane on the Oris watch case on subsequent timepieces.

It’s a fascinating piece of history, and one can imagine tracing the series of events: a famous French aviator makes a notable Channel crossing, and Oris incorporates the symbol of the man and his plane into their watch catalogue soon after, commemorating the event. Of course to some degree that’s supposition, but there in the Oris archives sits at least some evidence to support it.

The Hölstein archive search also uncovered some other interesting evidence, that of what may have been the first Oris pilot’s wristwatch. (The Blériot piece, you will recall, was a pocket watch.) There was also some information about one of the brand’s first wristwatches, a round, brass-cased watch with a big crown, an aluminum dial, and a pin-lever movement. This was a wristwatch, but it was a very early model, basically a pocket watch with wire loop lugs soldered to the case.

As a tribute to this new discovery of their own heritage, Oris is releasing the Oris Big Crown 1917 Limited Edition Ref. No. 732 7736 4081 LS, a 40mm watch limited to 1,917 pieces. This is a special edition faithful to the original, with an onion-shaped big crown, early 20th Century Arabic numerals, blued steel hands, and domed glass. It even features the vintage Oris logo. It features a new caliber, the 732, which recreates a quirk of the original timepiece: the time can only be adjusted when the button at 2 o’clock is pushed down. Of course, the watch is manufactured to current Oris standards, and in every way measures up to modern watchmaking techniques. Still, it’s a little piece of a history that even Oris didn’t know they had, and it makes for a great addition to their lineup.