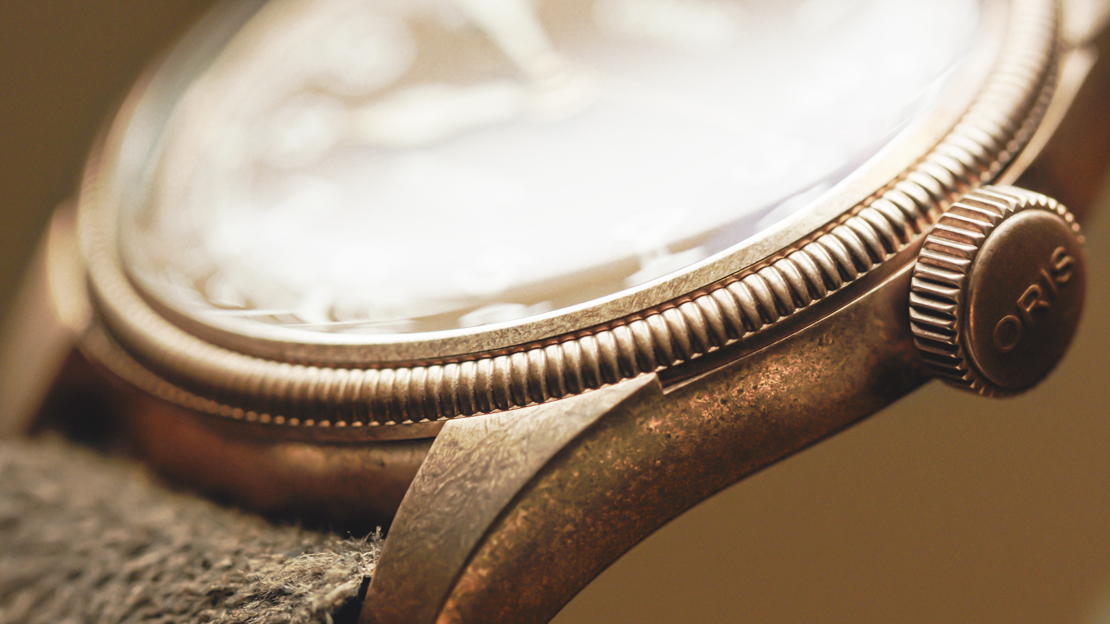 The Big Crown Pointer Date first entered the Oris collection in 1938. It was created for glove-wearing aviators, hence the oversized crown. But Oris did not just make a practical watch, they also created a beautiful wristwatch.

Oris was founded in 1904. Shortly after Louis Blériot flew across the English Channel in 1908, Oris created a pocket watch with an image of his plane engraved on the case. In 1917, Oris produced their first pilot’s wristwatch. It was a clever piece that could only be adjusted when a button above the crown was activated.

In 1938 Oris produced the Big Crown Pointer Date and released it for the very first time. It had an oversized crown that could be easily operated by a pilot wearing gloves. It had large Arabic numerals so the time could be read quickly. It had a fluted bezel and a central hand with a pointer tip that indicated the date. The watch was simple, logical, useful. More than 80 years later, the same design principles are still found on this signature piece. Over time, it has been refined with material and mechanical movements, but its timeless pioneering spirit remains.

Today, the new Oris Big Crown Pointer Date continues its story with a new model: the Oris Big Crown Bronze Pointer Date. This new model is encased in solid bronze. This material carries unique qualities as it will patinate over time, creating its own pattern, writing its own story, making itself a one-of-a-kind piece. It also has a solid bronze dial that is chemically treated and coated with a transparent matte lacquer to create a unique finish for every piece.

Powering the hands is the Oris 754, an automatic winding movement with a bi-directionally rotating Red Rotor™ with a power reserve of 38 hours. It has a domed sapphire top glass with anti-reflective coating on the inside. The case back is made of stainless steel with a see-through mineral glass. The 40 mm bronze case comes with a brown leather strap with a bronze buckle.

As mentioned earlier, the Oris Big Crown Pointer Date was first released in 1938. From its first introduction, it has always been in Oris’ roster of models. One of the men behind the decision to keep it in their collection in the 1980s was Dr. Rolf Portmann, now Oris’s Honorary Chairman.

In an interview, Portmann explains: “In 1971, Oris was sold to General Watch, part of the ASUAG Group. At the same time, I became Oris managing director. The group was naïvely buying up watch companies without thinking how all the pieces would fit together and what their objectives were. At that time, political unrest was shaking up a lot of markets around the globe and some of them collapsed. At the same time, the Swiss franc suddenly strengthened after the United States quit the Gold Standard. And on top of that, quartz watches from the Far East emerged. These combined led to great difficulties for Swiss watchmaking. The banks consolidated the industry by creating ASUAG and SSIH as the two key holding companies. After restructuring, ASUAG planned to close Oris down. But in 1982, they left me the chance to take it over, with its sales administration, inventory and production facilities. I took that chance.”

After more than 8 decades, the Oris Big Crown continues to be relevant and still in demand by watch lovers. Portmann said: “Although we don’t need a watch we can use wearing gloves any more, the idea is romantic, which I think people like. And a simple, handsome design that’s easy to read will always have relevance. In a way, I’m surprised its still here, but fundamentally the Big Crown is a design that makes sense. That’s the Oris way, and consumers like it.”

He also explains the usage of bronze in this new model. He said: “In a world of clinical perfection and digitalisation, people appreciate objects that tell their own story. As this watch patinates, that’s what it will do.”

The Big Crown Bronze Pointer Date symbolises Oris’s industrial philosophy and the value of a Swiss Made mechanical watch. With one on your wrist, you can have a piece of history, and intently watch how this new timepiece will tell its own story as it patinates over time.

That name says it all. But not really.

When Reverse Is More You?