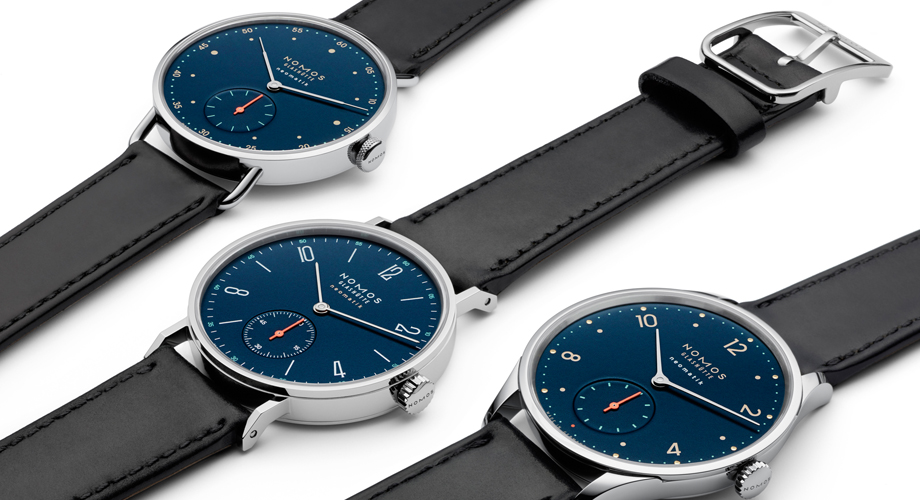 NOMOS Glashütte presents to us a series of watches that convey the deep, deep blue that comes to us within. This series of three new pieces takes its place next to the already-existing Tetra, and so enhances and elongates the series that is already, really, bluer than blue.

Of course, the Tetra, alone among these four, is visibly different from the others, because, well, it’s square and the other are all round. (Yes. Sometimes life really is that simple.) ‘Tetra’ actually MEANS four, so a four-sided watch is not really a shocker here. But there are definitely qualities that link the set together, even with that disparity. NOMOS Glashütte always brings a certain stark cleanliness to their watch dials. It’s really no surprise that their watches should be minimalist, uncluttered and possessed of nothing but the facts, albeit in the most beautifully geometric way possible. These new timepieces, all different but all of a set, show us, indeed, how much variety there can be in strict utilitarianism. Look closely, and see the truth.

“…definitely birds of a feather. And in this case, that feather is midnight blue.”

In the range that is allotted within this triple play, there are variants that need a keen eye to spot the differences. (Indeed, seen from a distance, you might be convinced that there is only one watch, and that NOMOS Glashütte is somehow pulling a fast one on you. But that is not the case. In fact, humor seems somewhat out of step here.) The three pieces share many things, but a close look at the hands, the dials, the indices… all these remind us that variety is, indeed, in the details. And the details here can be delightful. Oh, you might have some difficulty choosing among the watches, but the difficulty will arise from the fact that each of them is so appealing. You will have to pick your favorite, and it’s not going to be easy. The three watches are all different, but are definitely birds of a feather. And in this case, that feather is midnight blue.

The three pieces are called by separate names. There is the Metro Neomatik, carrying a design that won several awards when it showed in 2014. The Tangente Neomatik, the oldest of the models. And the Minimatik, which held the first DUW-3001 when it debuted on the scene and is still a strong performer today.

The Minimatik was actually the watch model that housed the debut of the DUW-3001, the watch movement that is actually powering all of these three new models. That was back in 2005, more than a decade ago. The caliber has served the NOMOS Glashütte brand well, and now it is getting three new machines to its credit. The DUW-3001 is an ultra-thin watch caliber that went into series production in the spring of 2016. The movement is impressively reductive, being only 3.2mm in height. This allows the new Neomatiks to carry a high-performance accurate caliber in a slim, elegant case. The watch movement is the tenth produced in-house by NOMOS Glashütte.

As we look at the three new pieces, it’s important to remember that NOMOS Glashütte is putting them out there, but they are all based on solid performers from the brand’s past. There’s no denying the new look is striking, but let’s not forget that the things we’re looking at are possessed of a distinguished track record already.

The Metro Neomatik Nachtblau is probably the most offbeat of the collection. The Metro watches, designed for NOMOS Glashütte by industrial designer Mark Braun, won multiple awards for them in 2014. The midnight blue face serves the Metro just fine, with the recessed seconds subdial at 6 o’clock gaining a little more enhancement. It’s only 8.06mm thick and 35mm wide. The Metro may be my favorite of the line.

In midnight blue, the Minimatik seems to show its true colors. The design of the watch is both functional and a little eclectic – maybe not as much as the Metro, but just a little bit playful, like a scarf thrown on for contrast. The watch sports a domed sapphire crystal. The dots and numerals that serve to mark the hours are eminently readable, but they seem to somehow have their own character as well. The Minimatik comes in at 35.5mm wide, and 8.86mm high.

The Tangente is NOMOS Glashütte’s old reliable, but it’s still a great design. If the other Neomatik watches are the quirky and creative ones, the Tangente is the one that holds it all together. So how does it do with the new blue? How does the color affect it?

To be honest, the Tangente looks pretty good in midnight blue. The original design, with its mix of severe lines and curves, gets a certain freshness from the color, but it is still undeniably a Tangente, with all that implies. It’s like when someone who always wears suits goes out and buys a newer, better-looking suit. Still you, only sharper. That’s how the Tangente Neomatik Nachtblau reads to me. It may not be your favorite Nachtblau; on the other hand, it may just end up being your favorite Tangente.