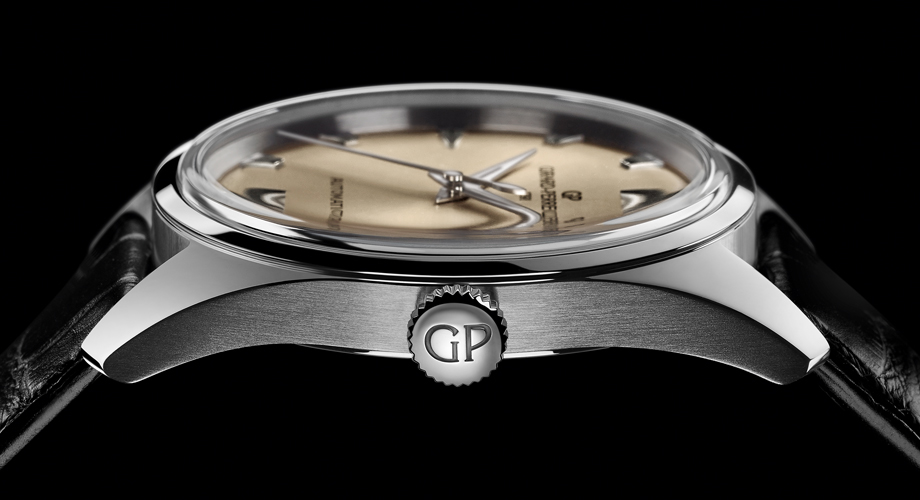 For centuries, watchmakers have been fascinated by the concept of winding a watch’s mainspring automatically. The main challenge being: how to turn the circular to-and-fro of the movement’s oscillating mass, or rotor, into the one-way circular motion that will load the mainspring.

Before, the answer was a device called a motion reverser, which featured ratcheted wheels. However, the stronger the wheels’ pawls and teeth, the larger the reverser needed to be, which led to an increase in idle travel. The remedy then was to use smaller, read: more fragile components, which was never a truly satisfying compromise.

In 1957, Girard-Perregaux created a revolutionary solution called the Gyromatic, which substituted roller-equipped unidirectional clutches for the ratchet wheels. The resulting construction was simple, reliable and efficient. Best of all, the clutch’s compact nature opened the way for slim, sleek and stylish designs.

The Gyromatic has since demonstrated its excellence in thousands of Girard-Perregaux models throughout the years. A strong roster of which has included the top-of-the-line Gyromatic HF (high frequency), which has been called the self-winding watch equivalent of a Formula 1 race car. Indeed, the development of the Gyromatic marked a major contribution to mechanical watch design. A fact attested to (among others) by the patents granted to the company over the years.

In 1966, the Neuchâtel Observatory’s prestigious Centenary Prize acknowledged Girard-Perregaux’s superior ability. The next year, no less than 73% of all rating certificates were attributed to Girard-Perregaux high frequency watches, a tribute to the extreme degree of precision which Girard-Perregaux had brought to mechanical time technology.

To acknowledge this accomplished moment in their history, Girard-Perregaux has created the Girard-Perregaux 1957, a watch that is named after the year the Gyromatic was first used, but pays stylistic tribute to the production line models that first incorporated the roller-equipped unidirectional clutches in the 1960s.

The 1957 is named after the year the Gyromatic was first used, but pays stylistic tribute to the production line models that first incorporated the roller-equipped unidirectional clutches in the 1960s

Classically vintage to a fault, the Plexiglas-style raised crystal sets the tone for this classic beauty, made even better by the fact that it is actually sapphire, a 60s inspired design reflected by the 30-meter water resistant steel case measuring 40 mm in diameter. With prominent lugs like the shoulders of Superman, it is a very stylish case with a mirror-like polish on top and a brushed motif on the sides. Further, the champagne-colored domed dial contrasts nicely with the silver of the hands and indices. Indeed, the 60’s inspiration of it all makes one long for more seasons of Mad Men. What is it with these types of designs? Style seemed to come so effortlessly back then.

Seen through the sapphire crystal caseback is the in-house GP03300-0130 self-winding caliber, which, ironically, is not a Gyromatic movement. It is made up of 218 parts and is not even a high frequency movement. It beats at a very modern 4Hz or 28,800 vph and is backed by 46 hours of autonomous power. Finishing, however, is typically top-notch with Côtes de Genève (that’s Geneva stripes to you and me) and features circular graining on the main plate and oscillating weight.