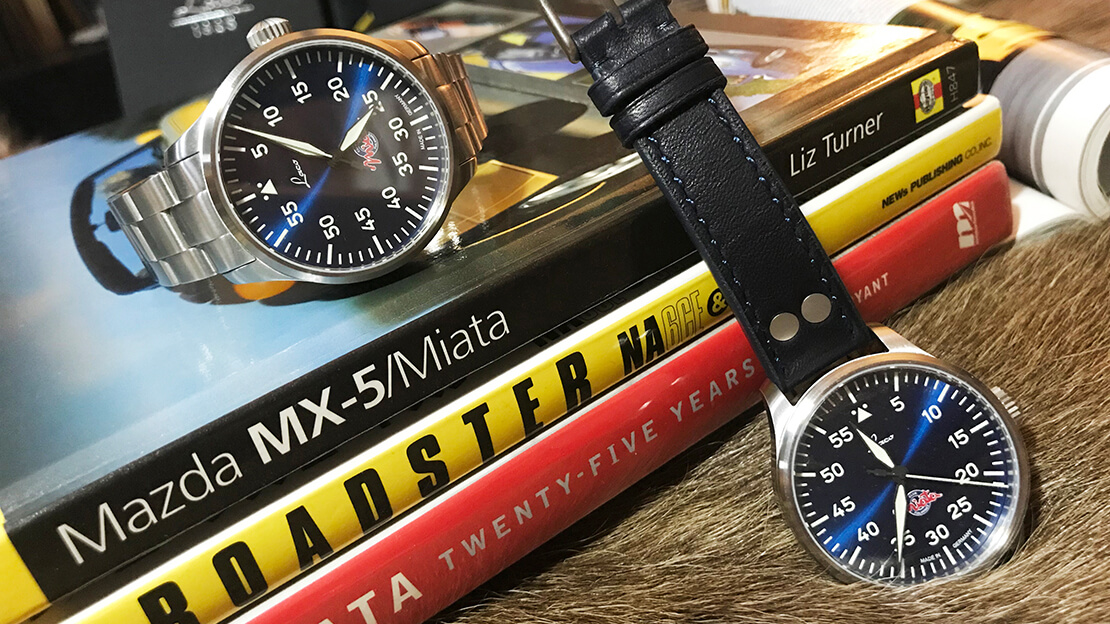 Now in its 25th year, the Miata Club Philippines, founded in 1997 by Eddie Salonga, has decided to commemorate history by producing an anniversary watch. One had already been produced to mark MCP’s 20th year, but for this their 25th, the primary watch proponent, Baselworld regular and avid enthusiast Martin Zialcita was more ambitious.

The entire process began when 25th president, Marc De Joya, approached Martin about producing a commemorative watch for the club’s anniversary. Martin’s primary condition was that he be allowed to produce a watch that was factory-made rather than just a modified version of an existing production model — the case for the previous 20th anniversary watch.

Not long after, Martin decided to contact Sarah Ruhmann, from the German watch maker Laco whom he’d met at Baselworld 2018, about producing a limited number of watches for MCP. Sarah replied the very same day, referring a delighted Martin to Dorothea Gunther who became Martin’s contact thereafter.

Established in 1925, and known for making timepieces for the Luftwaffe, Laco was an interesting choice for the club’s commemorative watch because the aviation theme is echoed appropriately by the open top, volante driving experience of the MX-5. Laco is notable for using Japanese Miyota — apart from Swiss — movements, in their watches — a sort of cultural hybrid that somehow seems appropriate for the MX-5’s character — the MX-5 was after all a very European idea manufactured in Japan.

The start point for the commemorative watch was the Augsburg Blaue Stunde 39, powered by the robustly reliable Miyota 821A movement, produced in a sandblasted case finish and fitted with a grey Nato strap. The commemorative watch would then be manufactured straight from Laco’s official production line featuring the numerals from a Type B model to show the number 25, applied to the dial from a Type A model. The club logo will be stamped right below the watch hands while the numerical lumes will feature in blue except for the 25, which is in green — a subtle nod to the anniversary year. This idea was suggested by Gino Reyes, one of the club’s many watch enthusiasts.

The anniversary watch’s case is brushed, not sandblasted, to better cope with our tropical environment. Consequently, the new watch will be accompanied by two straps: a dark blue leather Flieger strap with subtly contrasting dark blue stitching and a new, as-of-yet-unreleased steel bracelet.

Finally, the watch will feature engravings on the case side showing the club’s institution, the series numbers on the case back and the caption ’25 YEARS LONG LIVE THE ROADSTER’ on the watch’s rotor — the last detail, a certified factory job.

The Japanese Miyota movement suits the personality of the watch design well. The numerals are clear and very easy to read. Curiously, despite the absence of complication, the case itself sits rather tall — but far from being cumbersome, looks quite premium and interesting on the wrist with either bracelet. However, it is — to my eye at least — the optional Flieger strap that suits the watch’s personality perfectly.

The 39mm case is just the right size for most wrists and the watch has just enough heft to denote quality without being uncomfortably heavy. The steel bracelet is comfortable with delightfully solid, flat links allowing it to conform easily to the wrist. The overall effect is that the watch feels many times more expensive than its asking price suggests.

The end result is a handsome watch that is presented in a high-quality box wearing its steel bracelet — the Flieger straps are provided separately; the boxes have small stickers that reflect the series numbering of the watches within. The regulation warranty card and manuals are also included. The idea for the first twenty-five watches is that each president gets the corresponding series number for the club year that he’s served — MCP presidents and their officers are elected annually.

Laco and MCP have completed a great collaboration producing an exquisite anniversary watch that cleverly blends the heritage and values of both. And since such a rare and special watch deserves more than just a common identity, I’ve respectfully taken the liberty of calling this delightful little watch the unofficial name Laco, MCP Flieger 25.

True Art In The Finest Of Details