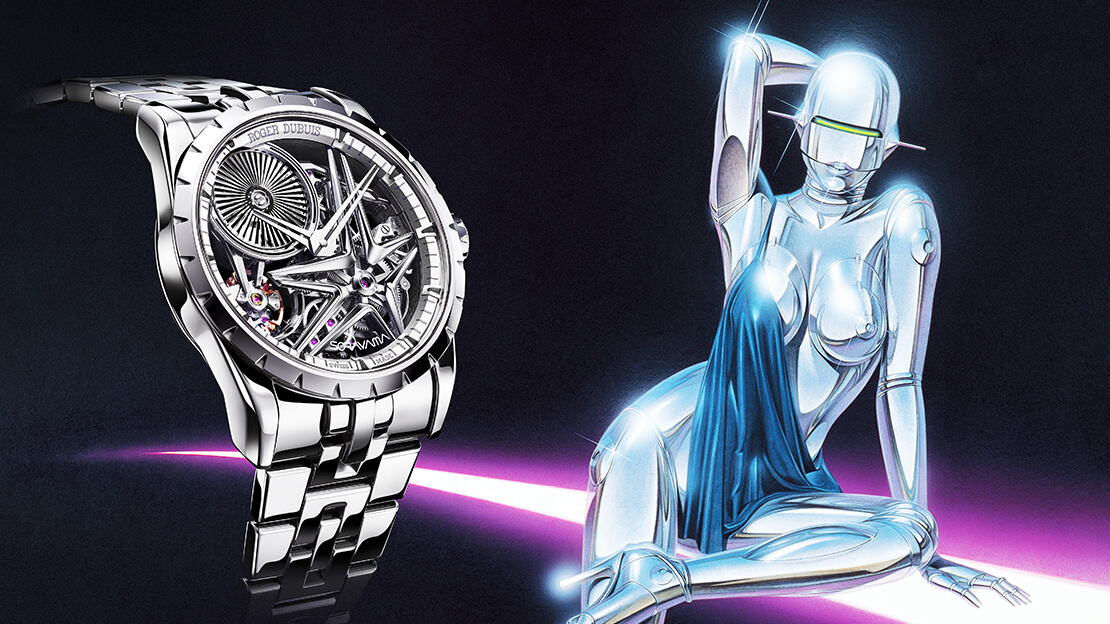 Roger Dubuis has been known to gather inspiration from the most unexpected places. That’s what makes them unique, what elevates them from the flock. This time around, their inspiration has led them to a Japanese urban culture artist who shares their values to “break the rules.” The artist’s name is Hajime Sorayama.

Hajime Sorayama is known for his fine art, his illustrations, and his industrial designs. He published his first book, Sexy Robot, in 1983. His inspiration for this book was taken from pin-up art, expressed as chrome-plated feminine robots. In the 2000s, Sorayama’s first-generation AIBO received the Grand Prize of Best Design award in Japan. AIBO was a robotic dog, the robotics of which were developed by Sony’s Toshitada Doi. It was the first “artificially intelligent” mass market consumer robot for entertainment applications. Sorayama also got to work with Nike on the “White Dunk Project.” And in 2014, he was called upon by filmmaker George Lucas to create a spread of droid fantasy pin-ups for a tribute art book entitled Star Wars Art Concept.

This Japanese artist has showcased his expertise time and time again, continuing on what he has been doing since he was a young boy in school. His talent has been rewarded multiple times, and his artwork allowed him to collaborate with the biggest names in fashion, technology, and even music.

Roger Dubuis recognised the opportunity to infuse his realistic and expressive signature design, so they invited Sorayama to the Manufacture to take on the creative challenge of reinterpreting the design of the Maison’s Urban Culture Tribe collection. Together, they produced the latest timepiece: the Excalibur Sorayama Monobalancier.

Reinterprating the Excalibur MB with hyper expressivity and sophistication, the artist chose to be provocative by breaking the Maison’s design codes. Curvy lines and a full shine finish contrast the sharp design and finishes Roger Dubuis normally applies to its watches. From his own iconic creations, Sorayama expressed his 3D sculptures within the polished titanium finish. This striking aesthetic required the Maison’s highly skilled watchmakers to develop unusual processes to replicate the desired shiny effect.

To add a little play with light to the timepiece, Sorayama reimagined the micro rotor to create a captivating and endless rippling effect. To achieve this required months of in-house prototyping, just to get the right combination of materials, decorations, and finishes. A touch of artistry from the Japanese master is seen on the extremely precise and optimal distance between each line of the stamped décor, which took a three hour-long guilloché technique on specific parts of the micro rotor, as well as an innovative assembly process placing a stamped sapphire dial above the reimagined micro rotor.

The Excalibur Sorayama Monobalancier houses the RD720SQ automatic calibre. One of the improvements to this movement is the increase in power reserve to 72 hours. The micro rotor has also been optimised to minimise vibrations. The balance wheel was also modified to improve stability and make it less sensitive to shocks. Better efficiency and energy transmission was further increased through the use of a new lube, and by optimising the shape of the escapement wheel, pairing it with adjustable pallet stones and constructing both elements from diamond-coated silicon. This new timepiece is also the first Roger Dubuis titanium grade 5 bracelet to feature its Quick Release System for ease and versatility. The 42 mm case is crafted from titanium grade 5 as well.

But the Excalibur Sorayama Monobalancier is not just a work of art, it is also awarded with the Poinçon de Genève — one of the most exclusive stamps of certification in the watchmaking world.

This beautiful wristwatch is limited to just 28 pieces. Complying with the rules is not always the best course of action. There are very rare occasions when rejecting the rules to let creativity blossom works, as embodied by the Excalibur Sorayama Monobalancier.