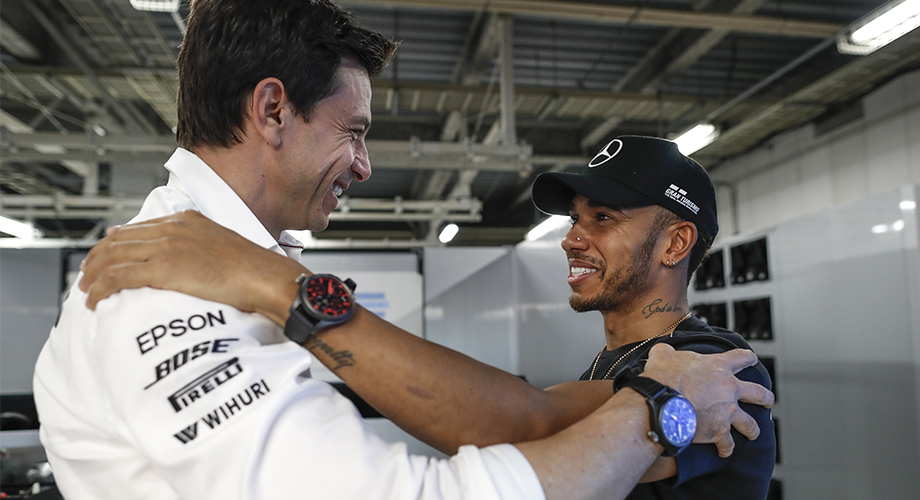 THREE races into the 21-grand prix calendar of the 2018 Formula One championship and he has not won yet. But with two races still scheduled for this season (Brazil and Abu Dhabi), Lewis Hamilton has already clinched this year’s drivers’ world championship crown.

To think he was not even on the podium at the Mexican GP when he took the title (he finished fourth).

Hamilton now boasts of five drivers’ championships, following those he won in 2008 (his sophomore year in F1), 2014, 2015 and 2017. The record puts him on equal footing with Juan Manuel Fangio, and closer to the seven drivers’ world titles of Michael Schumacher. But there’s time to catch this, oh there’s time.

With a stature like this, it isn’t surprising for IWC Schaffhausen to laud Hamilton’s latest achievement — the racer, after all, is among its brand ambassadors. Plus, IWC has served as the Official Engineering Partner of Hamilton’s team, Mercedes-AMG Petronas Motorsport, since 2013.

“Only a true champion can perform for so many years at such a high level, especially in a hugely competitive sport like Formula One, where victory and loss are sometimes separated by just a few milliseconds. We are particularly proud to have been working together with Lewis since 2013. He embodies perfection, passion and quality — the same values which we, as watchmakers, feel a deep commitment to,” said IWC CEO Christoph Grainger-Herr, also a fixture at F1 paddocks on most race weekends.

IWC’s and Hamilton’s involvement has in turn been the product of the longstanding collaboration between the Swiss luxury watchmaker and Mercedes. Before its ties to the F1 efforts, IWC has since 2004 been a partner of Mercedes-AMG, the high-performance brand of Mercedes-Benz. And, after five seasons with the F1 team, IWC and Mercedes-Benz have agreed to a “long-term extension” of the existing partnership.

This means that Hamilton is likely to continue being a regular guest at IWC events. Only recently, the champion took part in an intimate gathering at IWC’s flagship boutique in New York.

Don’t forget, too, that there are two more races left this season.