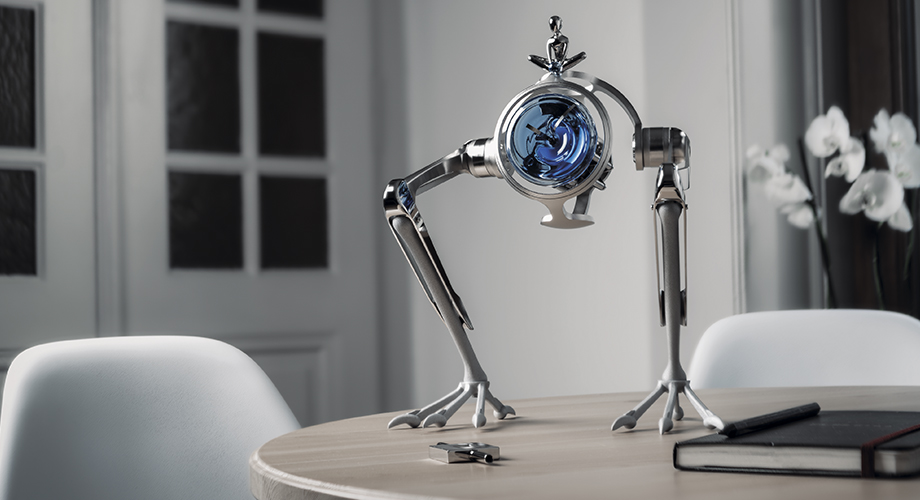 FOR this year’s Only Watch, the annual charity watch auction, MB&F did not take any of its previous models and re-rendered it with elements tied to the event, but actually teamed up with clockmaker L’Epee 1839 to create a new, yet-to-be-released piece, then signed this up for the auction.

Named Tom & T-Rex, the piece — a freestanding sculpture, really — is the first in the series of T-Rex clocks made by the two brands together. The models not meant for Only Watch is set for release in August. The Only Watch auction is on November 9, but watchmakers have started putting out special produce for the noble event.

Tom & T-Rex differs from the subsequent T-Rex pieces, the brands swear, by the sculpture of a child atop the metallic mechanical contraption, which in turn looks like an orb that sprouted a pair of spindly Cretaceous legs. Seated yoga-like, the child figure on top looks relaxed and precarious at once. There’s a distinct sense of movement in something static. It’s eerie but innocent. Definitely awesome.

Oh, and the child’s name is Tom.

MB&F and L’Epee says Tom represents children suffering from Duchenne muscular dystrophy, or DMD, a genetic disorder which causes the gradual loss of basic motor functions, including the ability to walk. Tom, then, finds his legs in T-Rex.

Now, why is Tom associated with DMD? Because the Only Watch auction, held for the eighth time this year, aims to raise awareness and find a cure for this disorder, which mostly affects boys. The auction supports the Association Monegasque contre les Myopathies. It has raised more than 40 million euro in its previous seven outings.

The T-Rex measures 26.5 centimeters high (Tom is 4.3 centimeters sitting down) and is made from palladium-plated brass, bronze, stainless steel and Murano glass. The surfaces of these materials are either sandblasted or polished, so there is interplay not only in finish but also in depth. Together, the clock weighs around two kilograms.

The “eyeball” of the Only Watch T-Rex is rendered in blue-tinted Murano glass. But T-Rex clocks not meant for the auction will have Murano glasses in red, deep blue and green.

The T-Rex’s legs, by the way, are modeled after actual Tyrannosaurus Rex bones; MB&F and L’Epee 3D-scanned fossilized skeletons to create these. Just as impressive is that the stance of the T-Rex is so natural that it’s easy to think the sculpture can move, when in reality it is fixed in place.

Propped by these legs is the actual clock that beats via an in-house mechanical movement made by L’Epee. The 17-jewel handwound movement, which spins an hour hand and a minute hand, operates at 18,000vph. It has a lone mainspring barrel, but most likely a big one, because the calibre has an eight-day power reserve.

And here is something else that’s really cool about it; setting the time is done via a key which slots through the center of the Murano glass dial. To wind the movement, the same key is used, but this time it is inserted into a keyhole at the rear.

Incidentally, the T-Rex is not the first collab job between MB&F and L’Epee; the two brands have made 10 clock models already. But while all are awesome, none is as meaningful as the Only Watch piece.

And its’ all because of Tom.