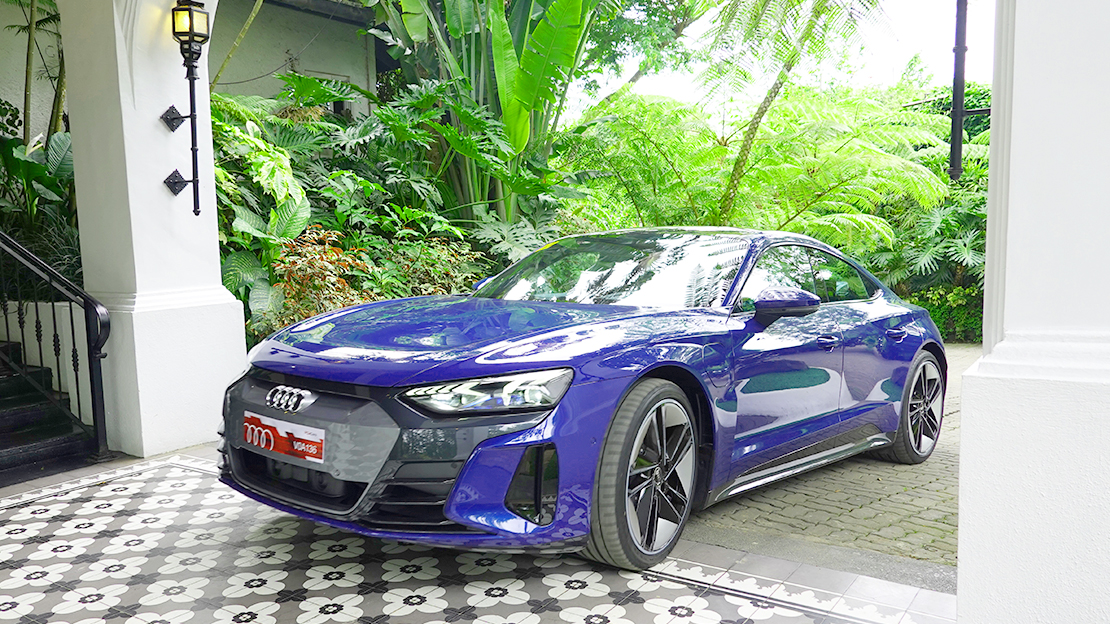 An electric run, relaxed as well as hugely fun, to Antonio’s in Tagaytay We bring the Audi eTron GT through hours of fun, traffic and storm.

We don’t often get to Antonio’s in Tagaytay. It has always been a very special, relaxing place to go but often the drive there to and from Manila can be taxing. So it usually ends up being a special occasion in and of itself.

It is nice to see that the place itself and the menu, as well of course as the execution and experience, have built on their strengths since our last visit before the pandemic. There were favorite staples, I personally have always loved their salads as a wonderful start to the journey. But it is always a combination of things that makes everything work out so well. It is all about balance.

We took a new car up to Antonio’s. The new Audi eTron GT, fresh off it’s win at the World Car Of The Year Awards for Performance Car Of The Year. This is an all-electric car and we wanted to see how it would handle the drive and the expected traffic. Electric cars can be wonderfully relaxing quiet drives, and we felt it would be a good match for our expectations and experiences at Antonio’s.

All was as expected. We rolled into the familiar gate at Antonio’s just before noon, where they always ask for your reservation name. Rolled because one thing you need to remember is that electrics are so quiet people often don’t know you are there. The restaurant is past a small community with children walking around, and they don’t expect you to creep up noiselessly. Thankfully, as is required in many countries, electric cars generate noises so people know you are there. You will hear them if you open the door, but not necessarily in the cabin.

We walked up the stairs and were immediately greeted and brought in. We were asked where we wanted to sit, and found a wonderful table for four that sat in the cross-breezes of several directions. It was quiet but not isolated, quite airy, and extremely pleasant.

It took a while for us to place our orders, which are by the way now contactless using a QR code and your phone. We were well-assisted by the management and staff, and chose combinations of remembered favorites (the Freshly Picked Farm Herbs with honey peppered glazed hazelnut salads) with new twists (Baked Burrata in a Phylo pastry shell) to start combined with fresh juices.

Desserts that followed were the Chocolate Olive Oil Cake, Duck Fat Pecan Pie, and their cheese plate. The coffee served was, as always, excellent.

The drive was wonderful, as was expected. The smooth delivery of power meant that every jump forward was a flow, but also extremely quiet. The eTron GT had adjustable suspension settings, and we were on comfort all the way up. Yet power was still there as needed, because it is unlike internal combustion engines where eco or comfort mode means changing graphs that perhaps can’t move as quickly as electric motors can. Air conditioning was on the whole way up, down, and everywhere. No concessions to range anxiety. Actually no range anxiety at all.

The drive home was rather tedious, because the rains came down strong. This meant over four hours of stop and go traffic in addition to the regular two hours of travel. It also meant going through some areas of four or so inches of built-up water and being soaked (the car, not us) by speeding buses. No issues at all.

When traffic did let up, and the roads opened up late in the night, the eTron GT proved it was every ounce an Audi and a Quattro. Balance was all there, but so was the feel as the wheels found their traction when you hit the… accelerator (because we can’t say gas anymore). No question that the eTron is true to the heritage of the brand in terms of dynamics and sportiness.

Design-wise it is also true to the marque. Whereas many brands to choose to be more edgy in the design of their electrics, Audi created a combination that brings the best of technology with the level of cabin quality and design they are known for. It felt welcoming and familiar.

In terms of power consumption, we will use the “remaining range” numbers because that is what everyone is most concerned with.

We started the day with a range of 328 km at an odometer reading of 144 kilometers driven. This range figure actually went up a bit (as high as 340 km range left) when we started moving because the car was regenerating power.

We ended the day with a range of 216 km left at 304 kilometer odometer reading, meaning we travelled 160 km kilometers total. So their range figures are actually conservative and leave a lot of room. This drive included over four straight hours of terrible stop and go storm traffic, a couple hours or so of calm relaxed driving in light traffic with some spirited driving, and driving we can’t really admit to. According to studies, 90% of charging done by electric car drivers is done overnight at home. The eTron GT, if you get one (and oh should you get one) comes with a charger they will install in your location of choice and a transportable charger you can keep in the trunk. In case you want to charge somewhere like Antonio’s. If they don’t yet have a charger. Yet.

It is the combinations that work. The eTron GT won the Performance Car of the Year Award, at the World Car Of The Year Awards. It won it over the more powerful eTron RS. Performance and the judgement thereof isn’t just about pure power or track-worthiness or bragging rights numbers. The world more than ever is about the proper use of technology, power and soul. About authenticity to heritage. That’s a good thing.