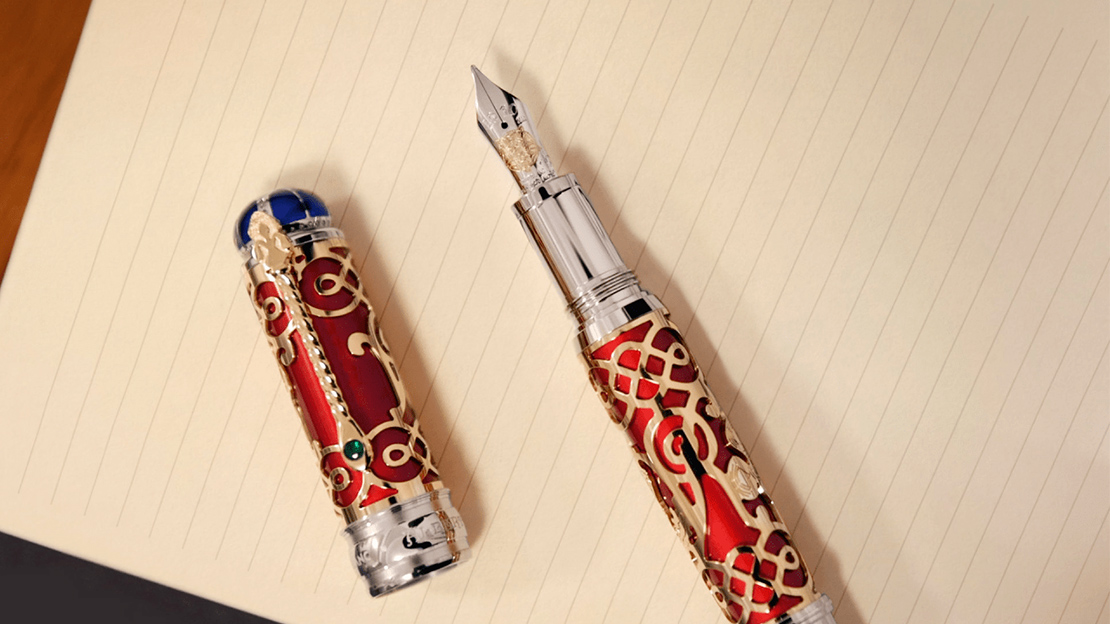 The United Kingdom, the Realms and the Commonwealth are celebrating the Platinum Jubilee of their beloved Monarch, Her Majesty Queen Elizabeth. She has been in service to the people for 70 years. In those seven decades, she has weathered many storms, stood steadfast, and continues to inspire others with her love of family and country. She may have taken inspiration from one of her ancestors, Queen Victoria.

Queen Victoria, ruled the United Kingdom with Albert, Prince Consort, at her side. Together they led people into the future, with their eye on technology, economic power, and culture. Among the endeavors they supported were the Great Exhibition of 1851 in London’s Crystal Palace, and the founding of the Victoria and Albert Museum and the Royal Albert Hall.

Montblanc has, since 1992, chosen to honor a patron of the art with a limited edition writing instrument. Each piece in this Patron of the Art Limited Edition series reminds us of Montblanc’s firm belief that arts and culture are essential to a vibrant society. For this, the final edition, Montblanc pays tribute to Victoria and Albert.

This iteration of the Patron of the Art Limited Edition series covers Victoria’s journey from princess to Queen, and Albert’s similar journey from prince to Prince Consort. Whoever said that behind a strong man was a strong woman need only look at the British Monarchy to know the reverse is also true. Victoria and Albert, Elizabeth and Philip are just two examples.

The collection has pieces that honor Victoria and Albert separately and together. Victoria’s pieces have her famous crown and scepter, while Albert’s pieces reflect his cultural achievements. The pieces meant to honor both of them focus on their love for each other and the unified couple that they were. Let’s take a closer look at some of the special details.

Montblanc Patron of Art Homage to Victoria & Albert Limited Edition 4810
The Limited Edition 4810 harkens back to the early days of young Victoria and Albert, with the pearl-white barrel a symbol of youth and purity. The Victorian “V&A” resembles how the young couple would unite their initials. The use of the ampersand is not just for aesthetic purposes within the design; an ampersand implies permanent connection and partnership, something that cannot be broken. See, even royals feel the exuberance of young love. The edition meant for Victoria features a cap in translucent mint-green lacquer, one of her favorite colors. The words “I will be good” are engraved on the cap ring. Albert’s edition has a burgundy-colored translucent lacquer cap, representing his British Field Marshal uniform. This piece has engraving too, “treu und fest,” meaning faithful and firm, and his coat of arms. Both editions have a handcrafted Au 750 solid gold, champagne-tone gold-coated nib.

Montblanc Patron of Art Homage to Victoria & Albert Limited Edition 888
The Victoria version here celebrates her stepping into the Queen role, and the translucent red lacquer represents her coronation dress, while the champagne-tone gold overlay reflects her monogram. Albert’s version, in turn, represents his achievements. It may have been hard to play second fiddle to a Queen, but Albert did not let that deter him. Among his artistic pursuits was a tartan for Balmoral Castle in Scotland, represented here in the gray translucent lacquer. Both versions have each other’s name, their wedding date, and the favorite “V&A” symbol.

Montblanc Patron of Art Homage to Victoria & Albert Limited Edition 100
The Limited Edition 100 part of the collection is a nod to the great romantic love that Victoria and Albert shared. The mother-of-pearl barrel with the champagne-tone gold fittings echoes the colors of Victoria’s wedding dress. The couple had nine children, each one represented by a line on the cone. There is sweet engraving here too, “Unis à jamais” (united forever), from a ring given to Victoria by her half-sister as a wedding gift. Another line, this time from Albert to his beloved, “Theuerste innigst geliebte Victoria” (Dearest deeply loved Victoria) bring the love story to full circle.

Among Albert’s skills and talents was designing jewellery for his beloved Victoria. After all, before they were Queen and Prince Consort, they were simply Victoria and Albert. He often used the orange blossom in the designs he planned for her, and she wore this sweet flower on her wedding day. The orange blossom is seen here in the detachable cap ring. Another nod to true love is the blue sapphire on the clip, representing the coronet that Prince Albert designed for Queen Victoria in the year they married.

Montblanc Patron of Art Homage to Victoria & Albert Limited Edition 8
All great love stories have a sad part, perhaps to make us treasure the happy memories that much more. This Limited Edition 8 commemorates the part of Victoria’s life after her beloved Alfred had passed. The black onyx cap is both serene and regal, and has a medallion engraved with “VRI” (Victoria Regina Imperatrix). The Queen wore a locket after Albert’s passing, with the message, “In Erinnerung an Albert” (In memory of Albert); this engraving is seen in this Limited Edition too.

All Hail the Queen
Montblanc has chosen a fitting pair of Patrons of the Art for this last offering of the Limited Edition series. No other pair would have made such a fitting close to this wonderful series – Victoria and Albert had a strong relationship as they led the realm. But even more inspiring than their successful leadership was their steadfast love for each other.