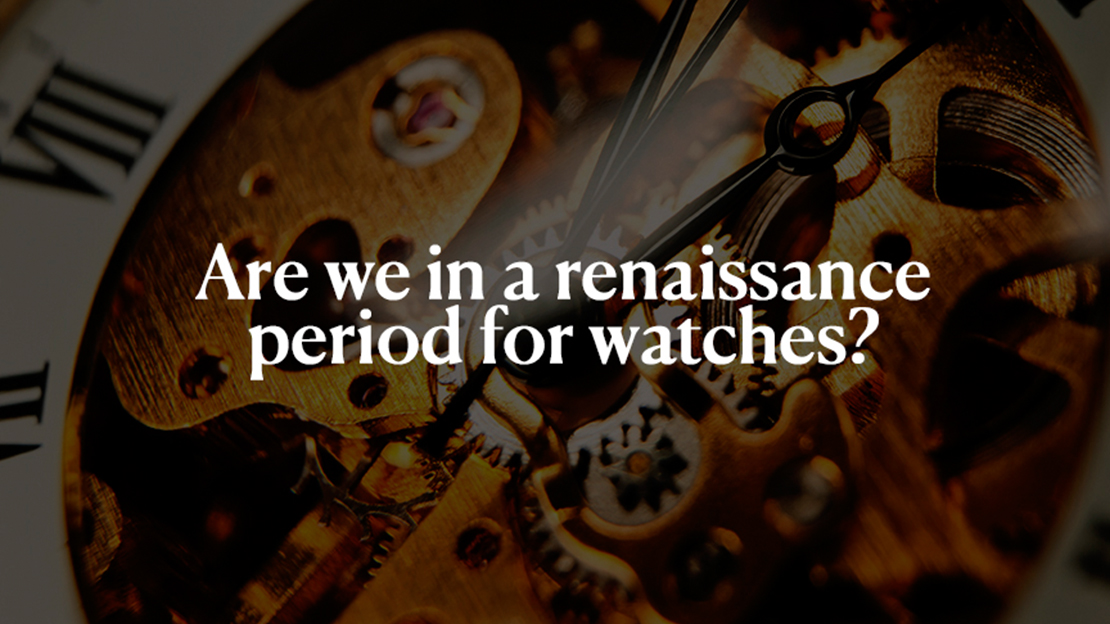 Mitja Borkert, the design head of Lamborghini, has said rather famously that we have been in the modern Renaissance period for the automobile. Are we in something similar for watches?

In its most base form, the word renaissance is often used to mean a period of renewed interest. If that is the case then definitely for watches but arguably not for cars. But a deeper definition includes the desire and effort to surpass previous standards and ideas. Yet another use of the word is in the phrase “renaissance man” which is meant to identify someone who is extremely good at many things. Think Leonardo Da Vinci.

For any one of the uses or definitions, there is no question that we are in a renaissance period of watches, and of cars, and indeed of many different things. Definitely, the interest in wristwatches has grown tremendously in the last decade. The argument against this is that you don’t need a watch to tell time when you have a phone with you all the time. But look back at the actual renaissance periods, and you will see that there was the ability to appreciate and develop past the mere utility or use of a product. New thinking and new attitudes brought forth new concepts and executions in art, in architecture, in social structures, even in how we communicate. The last ten years, we definitely had development in how we communicate.

But back to watches. Right now you have huge interest in the “usual suspect” watches. The Rolex and Patek Philippe pieces that are so hard to get because, basically, so many people want them. Why? Because everyone follows where the algorithms point them, which will be kind of the easiest answer for things. What caused this? A revolution in how we communicate.

Yet at the same time there are segments of the watch industry that almost didn’t exist before, at least not at the levels they are right now. Small makers and companies and indeed people are making small runs of watches (and pens, and knives, and so on) that are not stratospherically priced but desirable nonetheless. Many of these new watches use commercial movements, which based on what the industry has told you in the last two decades or so is a big no-no. Yet remember, almost all the industry did exactly the same thing for generations. They bought calibres from ETA and Unitas and Zenith and others and created their own brand of watch around them.

These new makers want to create their vision, but in a way they can afford to do and people can afford to buy. So they will make extremely interesting dials or wonderfully shaped and finished cases but use a commercial movement from Switzerland or Japan or elsewhere. Many purists will shy away from these, but many also see this as a way to get wonderfully creative and well executed pieces without the price tag of big brands and their movements. And with, by the way, the easy ability to have their watches serviced.

Where else is there growth? From that big behemoth that scared the whole Swiss industry, the smart watch. There was a whole generation (or two) that just didn’t wear watches at all. Then the fitness trackers and smart watches started getting time on their wrists. And what is the logical step up then? Add to this the fact that the latest generations have been more attuned to how they look and how they express themselves than it has been for a while. Just like their bags and jeans and shoes and body art, the watch is a way to express their individuality. Their person. Their soul.