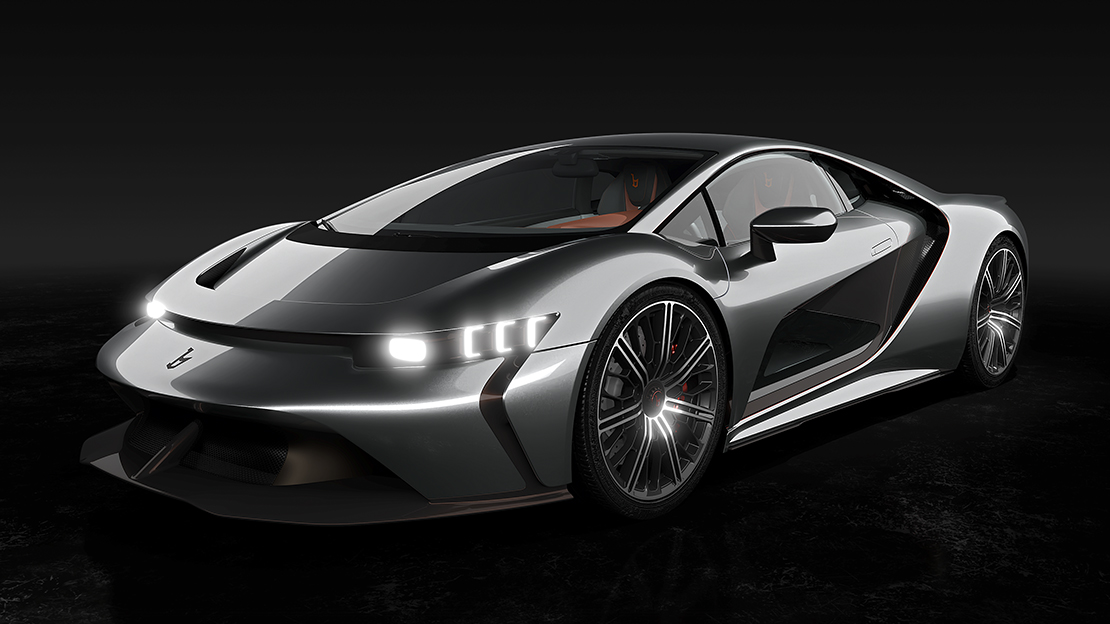 Building on more than a century of Italian automotive history, Bertone is now starting a new era as a coachbuilder of limited-edition ultra high-end sports cars.

Bertone’s passionate new owners are Mauro and Jean-Franck Ricci. They are continuing the history of the coachbuilder and design house, founded in 1912 and widely recognized for shaping some of the world’s most iconic sports cars.

Mauro and Jean-Franck Ricci, with 38 years of experience in engineering and automotive, and having established one of the most successful engineering consultancies within mobility, are now merging the invaluable Bertone design heritage with high performance automotive engineering.

The first in a series of limited edition vehicles, the GB110 is marking the 110th anniversary, and the beginning of a new chapter in the Bertone history.

The GB110 is also the first high performance car that will be supplied with fuel made out of plastic waste, a significant innovation in the automotive industry.

GB110, the hypercar fueled by plastic waste continuing 110 years of Bertone automotive history
Bertone, one of the most universally recognized Italian successes in automotive history, is continuing its legacy. The first in a series of limited edition hypercars,the GB110, is marking the 110th anniversary and the start of a new era for Bertone.

The GB110 is a limited-edition state-of-the-art hypercar, designed for breathtaking performance while at the same time paying homage to pioneering Bertone designs from the 50’s and 70’s. With 1100 hp and 1100 Nm max torque, and a unique design the GB110 aims to be an automotive work of art. Only 33 units will be produced.

“The GB110 is an immensely powerful car.” says Jean-Franck Ricci, CEO of Bertone. “What we are looking for is a strong acceleration and low weight for a maximum of pleasure. But at the same time it’s designed for everyday use and built with ergonomics and comfort in mind.”

“We are building this car for customers that appreciate the history and legacy of Bertone. And for connoisseurs who love sports cars with exceptional performance. It’s not only about raw power and performance.It’s about celebrating the long Italian tradition of timeless elegant cars.”

Rear view: The triangular shape of the exhaust lays the visual weight on the rear wheels. The rear wheel wells then flow onto the rear bumper, a solution not only used to lighten the rear end making it more technical but also to optimize the aerodynamics. The upper part of the bumper features an area that has openings to allow efficient ventilation of the engine compartment.

Bertone is the oldest Italian design coachbuilder, founded in 1912 by Giovanni Bertone. After World War II Giuseppe “Nuccio” Bertone took over his father’s coachbuilding business, and from the 1950’ onwards he succeeded in attracting talented designers like Giorgetto Giugiaro, Marcello Gandini and Franco Scaglioni. Nuccio Bertone offered them optimal opportunities to do outstanding work, and together they created a string of automotive classics, universally considered high points of vehicle design.

Bertone is widely recognized for shaping famous sports cars such as the Lamborghini Countach, the Alfa Romeo Montreal, Aston Martin DB2/4 Bertone Spider, and Lamborghini Miura. Beyond designing some of the most iconic vehicles ever produced, Bertone also fashioned a large number of high volume cars with groundbreaking designs for leading car manufacturers. And, besides doing car styling, Bertone throughout its history also manufactured cars, from the luxury vehicles produced in the 20s and 30s to later high volume models in the 70s and 80s, up until 2000.

Top view: The top view of the GB110 reveals its connection to Franco Scaglione’s BAT-series of concept cars: soft curves go along the sides and are projected towards the rear, where they merge with the rounded rear end of the car.

The marque has been lying dormant in recent years. Now it is being revived and reinvented by the passionate new owners Mauro and Jean-Franck Ricci.

The GB110 is the first in a series of limited edition ultra high-end sports cars from Bertone. Merging Italian elegance with breathtaking performance, the GB110 marks both the marque’s 110th anniversary and the start of a new era for Bertone as a ultra high-end car coachbuilder.

Side view: The side view of the GB110 shows the prominent inverted C-shape inherited from the Stratos Zero. From the underside of the door, a black-orange section runs under the car’s skin, emulating the air flow going along the side to the cooling system.
Three-quarter rear view : Scissor doors underline the extrovert character of the car and Bertone’s history of designing eye-catching vehicles. The forged center-lock wheels incorporate the Bertone logo in bright orange and offer a glimpse of the car’s huge brake calipers, also in orange. Across the car, hints of orange are used to underline its muscular shape.

“We believe that de-pollution will require different solutions with combinations of technologies. Plastic waste needs to be treated as a valuable resource. Through our partnership with Select Fuel we take what was once waste and convert it back into its original form.” says Jean-Franck Ricci, CEO of Bertone.