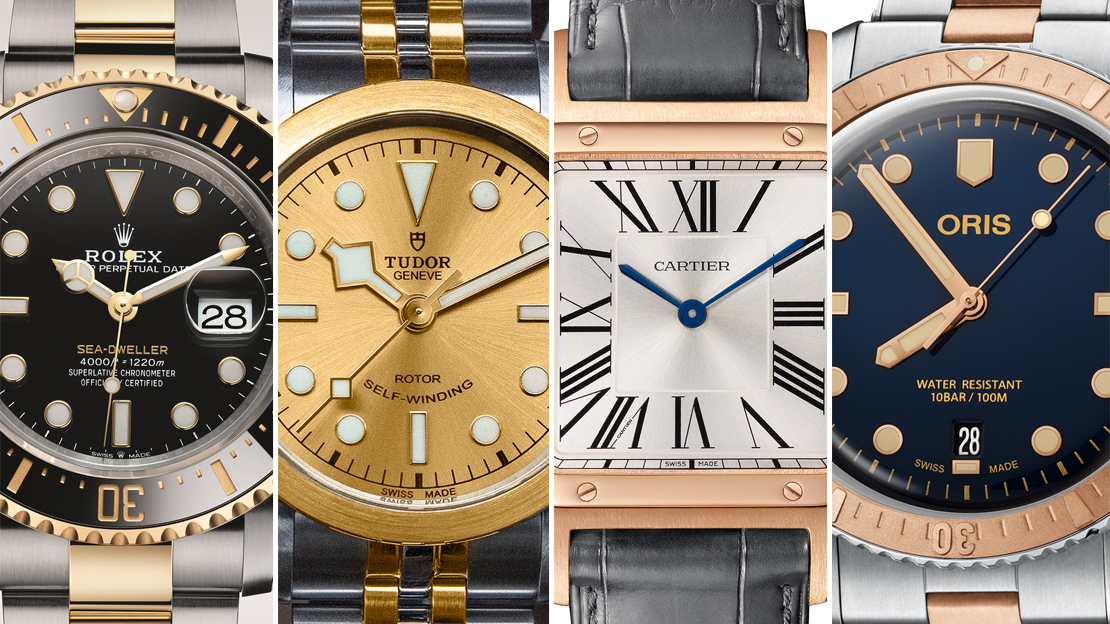 THIS two-tone treatment is actually tougher to pull off than it looks. Get it right and the result is something refined and tasteful, get it wrong and what comes out is the wrist equivalent of a polyester suit — cheap and shiny. Plus, there are certain watches that seemed destined to strut it, others that simply cannot, and still some that surprisingly are able to wear it well. In any case, there’s a bit of a resurgence of tasty two-tone timepieces this year, and here we count four that really get the look right.

Rolex Sea-Dweller
Continuing Rolex’s recent string of Baselworld hits is the ref. 126603 Sea-Dweller garbed in Rolesor — the brand’s combination of its Oystersteel and 18-karat yellow gold. This watch is the dressy version of the ref. 126600 released at the same show in 2017, which itself courted controversy because of its 43-millimeter case size (the largest for an SD) and its adoption of the cyclops magnifying glass (the first for an SD).

This means the latest Sea-Dweller retains all the good stuff for which this generation of the model is known, as well as all the traditional features that have made the Sea-Dweller a dive-watch benchmark. Think a scratch-proof ceramic bezel insert, a helium escape valve, trick bracelet (also in Rolesor) with diver’s extension and safety clasp, and a serious water-resistance rating of 1,220 meters. Powering it is Rolex’s superlative chronometer, silicon component-enhanced, self-winding cal. 3235 that beats at 28,800vph and packs power good for 70 hours.

Tudor Black Bay S&G
The base Black Bay — the one without the rotating dive-watch bezel — this year follows its brethren by getting attired in steel and gold, or S&G in Tudor-speak. The three of the base Black Bays (differentiated by their case sizes; 32 millimeters, 36 millimeters and 41 millimeters) now have this getup. Any of them can come in a black or champagne (well, a really golden champagne) dial, but all are supplied with a new five-link steel-and-gold bracelet that vaguely calls to mind Rolex’s jubilee.

Like the other Black Bays, these S&G models flaunt their distinctive hour markers and Tudor’s snowflake hands, as well as the guard-less oversized crown. The reverse-arcing “Self-winding” inscription on the dial is historically faithful, too. Well, the two-tone touch simply rounds out the watches’ vintage vibe. Beneath the cases is Tudor’s cal. 2824, which as suggested is based on the ETA 2824. It spins at 28,800vph and has a 38-hour power reserve.

Cartier Santos-Dumont
Brought out at the Salon International de la Haute Horlogerie in January, the new Santos-Dumont line counts this classic steel-and-gold model that comes in either 27.5 millimeters or 31.4 millimeters across. As a tribute to the daring — and very dapper — pioneering aviator Alberto Santos-Dumont the watch is an understated, pared-down piece which very much recalls the original model from 1904. It carries the features which have made it an icon; Roman numerals, visible screws, and a crown topped with a blue cabochon, all matched to a square case. The latest Santos-Dumont is fired by a quartz movement whose battery can last for around six years — about twice as long as what other premium quartz movements can manage. It is the result of Cartier having reworked and resized the movement to reduce its energy consumption. Then it paired a high-performance battery to it.

Oris Diver’s Sixty-Five Bi-color
Instead of going for the usual steel-and-gold mix Oris chose to drape one of its recent renditions of the Diver’s Sixty-Five in steel and bronze. The approach is both unusual and logical; two-tone watches are picking up steam while bronze ones have been hot these past few years. Combining them seems a no-brainer. And this turned the “Bico” into a current must-have piece among watch geeks.

Oris’s previous releases of bronzed Sixty-Fives (the limited-ed Carl Brashear and chronograph) met rave responses, and now so does the Bico. The watch retains the specifications of existing Sixty-Five three-handers, meaning it has a 40-millimeter-wide case that’s water-resistant to 100 meters, a solid screw-in caseback and crown, and sapphire crystal cover. It is powered by the Sellita SW 200-1-based Oris cal. 733, a self-winding movement operating at 28,800vph and which has a 38-hour power reserve. But, of course, what sets the Bico apart is its bronze bezel and bracelet accent.