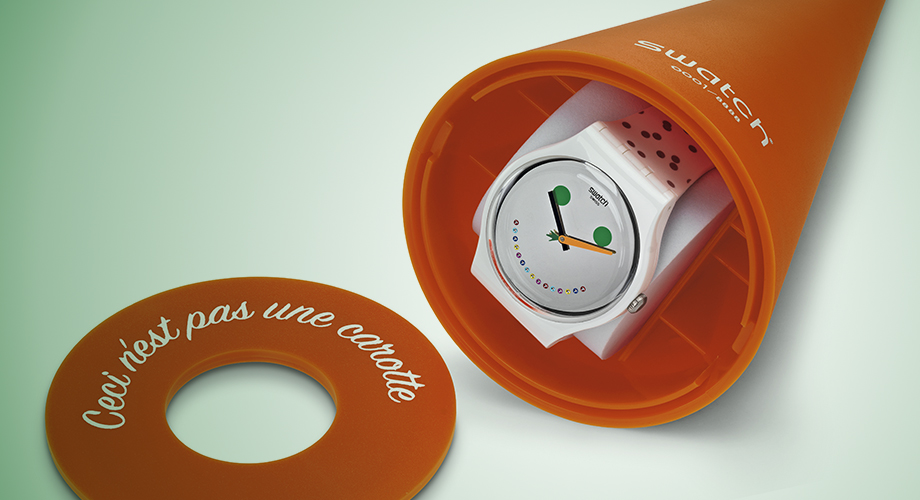 As can be expected from Swatch’s cheery vibe, the Isidor (belonging in the New Gent collection) arrives inside a bright orange cone-shaped package. And this does not make sense initially, until one realizes the watch — mostly white, with some color accents — is actually a stylized snowman, and that the package it comes in is meant to evoke a carrot that usually forms a snowman’s nose. Rather playfully, the phrase “Ceci n’est pas une carotte,” or “This is not a carrot,” is written in italicized script on the package’s lid. Helpful, if you speak French, in which case Henri Magritte’s 1928 oil painting titled The Treachery of Images might make sense, too. Depicted on that artwork is a pipe, accompanied by the phrase — you guessed it — “Ceci n’est pas une pipe.”

Whether it’s an exercise in meta language or not, what cannot be argued is that the Isidor’s dial, on which a pair of green dots form the snowman’s eyes, an orange seconds hand his nose, and multicolored dots arc into a smile, does bring holiday cheer. The light gray polka dots on the watch’s strap, evoking footsteps on snow, further the Yuletide imagery even more.

Now while the Isidor is limited to 8,888 pieces worldwide (like most of the Yule specials), Swatch’s other Christmas model for 2017 is capped at even less — only 1,500 examples are made. Called Santajocks (Ref.SUOZ403), the watch is the winning model in an online poll Swatch held in October, in which participants got to choose from among a selection of Christmas Swatches. Santajocks, according to the company, is a rendition of a “slimmed-down Santa,” one whose head appears on the 12 o’clock strap, his belly (complete with belt) filling up the dial, and two rather skinny legs painted on the bottom strap. Santa’s jock version keeps to his red-and-white suit, and matching black belt and boots.

Incidentally, Santajocks follows recent moves made by a few luxury watch brands on some of their special-edition watches — the watch is sold on Swatch’s online retail channel exclusively.

Of course, Swatch’s Christmas watches go decades back, stretching all the way to 1985, or barely two years after the brand was established. Since then, the company has brought out special pieces every Yule, save in 1986, but made up for that year’s absence by releasing more than one model in other years.

According to data obtained by Calibre from Swatch’s Biel, Switzerland headquarters, there were a couple of models that marked the Christmases of 1998, 1990, 1991 and 2006. And the company was especially productive in 2007 and 2011, when it introduced three Christmas models for each of these years. This means that in 32 Yuletide seasons, Swatch had churned out 40 Christmas watches (not counting in Santajocks).

Apparently, however, a Swatch Christmas special does not necessarily mean the watch is decorated for Yule. The 1985 model, for instance, was a stark black piece slightly brightened up by crystals to identify 12, 1, 2 and 3 o’clock. Called Sir Limelight (Ref. GB106), its hour markers were composed of four diamond-like crystals at 12 o‘clock, then three “rubies,” two “emeralds” and a “sapphire” for the succeeding hours. As a watch of the era, Sir Limelight measured a mere 33.9 millimeters across.

The Bergstruessli (Ref. GZ105) of 1987 was not any brighter — or Christmas-y, for that matter — although it had a significantly more ornate dial. By 1988 though, Swatch had gotten into the Yuletide groove through the red/green/gold Pompadour and Bonaparte (References GX106 and GX107, respectively) models. Of the pair, it was the Bonaparte that showed a bit more restraint; its gold-colored case had a plain red dial while its green strap was adorned only by bas-relief leaves. In contrast, the Pompadour screamed with a bright red strap decorated by gold brooches, and a gold case in which a green tapestry dial sat.

Swatch’s Christmas specials from 1989 to 1993 were outright flamboyant, alternatively lavished with lace (Mozart, Ref. GZ114), heavy beadwork over gold (Hollywood Dream, Ref. GZ116), cosmic rendering in royal blue and gold (Hocus Pocus, Ref. GZ122), large dangling crystals (the aptly named Chandelier, Ref. GZ125), and floral and jewelry arrangements (Roi Soleil, Ref. GZ127). The other watches from this period were no less whimsical, like the Encantador of 1990 (Ref. PWB151) and the colorful Bottone (Ref. PWK153) a year later. Like the majority of the Yule pieces, these all belonged to Swatch’s Gent Special collection, save for the Encantador and Bottone, which fell under Pop. In any case, Liberace would have loved them.

In 1994 Swatch raised the bling factor even more through a collaborative piece, named Xmas (Ref. GZ140), with fashion designer Christian Lacroix. As the brand described the watch, it was a “jewel-rich, garnet-red, gold-wrought work of art,” a model that was as “ornate as a king’s regalia.” Beyond aesthetics, Xmas brought a bit of horologic flair as well; to tell the time a sun disc rotated around 24 multi-colored crystals on the dial, negating the need for conventional hour and minute hands.

Swatch’s Christmas specials turned more in tune with the holidays during the rest of the 1990s. Yule paintings appeared on straps (Magic Spell, Ref. GZ148), and toy-like items were attached on cases (Light Tree, Ref. GZ152). But it was the 1997 to 1999 models that were quite seasonally joyous, starting with the green night sky rendition of Season’s Greeting (Ref. GZ900), then the champagne theme, complete with a cork, of Sparkling Life (Ref. GZ902), and ending with the classy silvery job of the Mille Strelle (Ref, GZ162).

Oddly, the end of the previous millennium saw a Christmas Swatch (World Party, Ref. GZ407) that had a black strap, dial and case, three gold-colored hands, and nothing else.

The piece for 2001 (Plume de Fete, Ref. SFK136) gained back more cheer due to its predominantly golden rendition, and was even offered as a numbered, limited-edition model. Also sold as a numbered edition was the Snow Queen (Ref. SUBZ100) that followed, which, true to its name, was an elegant, all-crystal affair that was not instantly identifiable as a Swatch.

Actually, it can be argued the Snow Queen set the tone for Swatch Yule pieces for the rest of the Aughts decade. Though Jingle Jangle (Ref. GZ408) and Holly Joy (Ref. GZ189) that followed were unmistakably Christmas items, thanks to their mostly red parts and décor that seemed lifted off a Christmas tree, Swatch went all arctic in the next few years, in which crystal was a pervading theme. Sparkling Night (Ref. LZ106) kicked the theme off, followed by the translucence of the Arctic Touch pair (References SUJZ100 and SUJZ100SC), the trio of Winter Day, Diamonds in the Sky and Christmas Charms (References SUJW100S, YLZ401S and YUS113GS, respectively), as well as Winter Frost (Ref. GZ192S).

Then, it was back to black in 2009. But this time, the noir look of the Star Edition (Ref. GZ199S) was jazzed up by heavy gold starburst patterns, including a 3D rendering on the dial that purported a skeletonized movement.

Swatch reverted to the crystal-like look at the start of this decade with the release of Snow Dance (Ref. GZ232S), a sedate piece that only had a faint image of a star on its dial, and the even more restrained Shimmer Ray (Ref. GZ250) of 2011, which, frankly, was nondescript. Good thing the two other Christmas specials for that year — Lucky Snow and Golden Rebel (References GZ259S and SUOZ119, respectively) — were more vibrant. The former came in blinding red wardrobe, complete with a snow globe, while the latter went the all-gold route.

Snow Your Time Away (Ref. SUOZ159S) flaunted gems and a snowflake on the watch’s skeletonized construction. Red Knit (Ref. SUOZ172S) was essentially a red synthetic sweater for the wrist, complete with reindeers and pine cones rendered in knit pattern. Holiday Twist (Ref. SUOZ709S) went more sedate with subtle gold glitters over white, and received blued hands — a nod to haute horlogerie; these are simply painted — and a pine tree for décor. Lucinfesta (Ref. SUOZ201S) reinterpreted the Yuletide vibe through a vague Latin flavor where gaily colored dots formed images of snowmen and other winter stuff. All of which set against a black background.

Last year’s God Jul (Ref. SUOZ222S), meanwhile, came with its own Christmas tale about a stressed out Scandinavian postman, who was tasked to deliver the watch, according to corporate literature. Also accompanying the aqua-colored, snowflake-lavished piece were “wintry packaging and a pair of seasonal sunglasses.”

No doubt, this year’s Isidor snowman has a Christmas tradition to live up to.