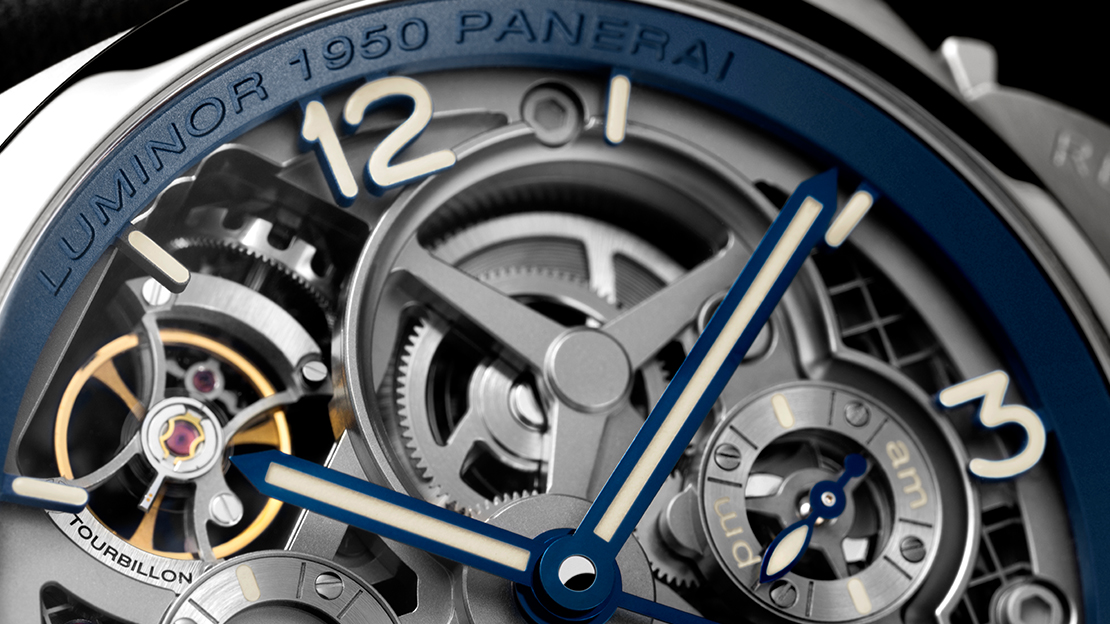 No, that headline isn’t the title to the 2002 hit song of the same name by the British super group, Coldplay, but instead refers to Galileo Galilei, the Italian polymath widely regarded as the “father of modern science,” and known for his many accomplishments in the fields of astronomy, physics, mathematics, engineering and philosophy.

Born in the Tuscany region of Italy, Galileo Galilei hails from the same region where Officine Panerai also hails.  And while the Italian watchmaker is currently headquartered in Neuchatel, Switzerland, it can trace its roots back to Florence.

Which is why 2010 saw the creation of Lo Scienziato (The Scientist), a collection of skeletonized tourbillon watches created by Officine Panerai in homage to Galileo Galilei, the Renaissance Man whose discoveries laid the foundations of, yes, even the development of modern mechanical timepieces.

Two years ago, Officine Panerai released the Lo Scienziato – Luminor 1950 Tourbillon GMT Titanio 47mm, a special edition limited to only 150 pieces that had a wealth of features including hours, minutes, small seconds, GMT with am/pm indication, a power reserve of six days with indicator at the back, and a particularly robust tourbillon, all encompassed within a not-so-insubstantial 47 mm case, a size that goes back to the earliest Rolex-manufactured Panerai military watches.  Which made the fact that it was so light even more alluring.

This was all due to the watchmaker’s unique take in manufacturing: it was made using 3D printing.  But not just any 3D printing, the Lo Scienziato Luminor’s titanium case (a metal best known not only for its high corrosion resistance and hypoallergenic qualities, but also for being 40 percent lighter than steel) was 3D-printed using Direct Metal Laser Sintering, and was hollowed out internally to form extremely complex geometrical cavity, making it even lighter without compromising the material’s structural integrity and tension resistance, all the while allowing for water resistance up to 100 meters.

This process uses a fibre optic laser to build up a 3D object by painstakingly merging layers of powdered titanium only 0.02 mm thick until it becomes a completely solid object.  The result is a form that would have been impossible to achieve using traditional working methods; and not only is the case lower in weight, but it also has a perfectly uniform and even appearance.

Then there is the P.2005/T hand-wound mechanical movement, which brings the weight loss even further.  Expertly skeletonized within an inch of its life, the original P.2005 hand-wound calibre makes its appearance here with titanium bridges and plates.   And thanks to the lower density of the material, about half that of brass to be precise, the whole movement weighs in at 35% less than that of the P.2005/S skeletonized version.

This year, the Lo Scienziato – Luminor 1950 Tourbillon GMT Titanio 47mm is back with all the features that made the original such a standout to begin with, along with a few aesthetic improvements.  Premier of which is the color blue of the hour and minute hands, which harmonizes perfectly with the metallic tones of the titanium case.  This color is mimicked on the flange and in the stitching of the black leather strap, giving the watch an even sportier appearance.

Unfortunately, this also includes the original’s wire mesh dial, a feature that made the first Lo Scienziato Luminor 1950 Tourbillon aesthetically divisive, at best.  True, Panerai watches have often been divisive in their simplicity.  But this dial is the complete opposite of the brand’s patented clean, sandwich dial.  And taking its place is something that wouldn’t look out of place in an 80s punk-rock band’s warehouse “lair.”

Yes, the lack of a traditional dial adds to weight loss.  And a lot of work obviously came out of the skeletonizing of the P.2005 hand-wound calibre.  But, why go through all the trouble of skeletonizing a movement and dedicating it to one of the geniuses of all time, and then make it look like cyclone wire?

But, they say beauty is in the eye of the beholder, so who are we to question the aesthetic choices of one of history’s most prominent watchmakers.  Having said that, this new Panerai Lo Scienziato – Luminor 1950 Tourbillon GMT Titanio 47mm sets a new standard for the watchmaker, and considering the thought and planning that has gone into it, is something Galileo Galilei would surely be proud of.