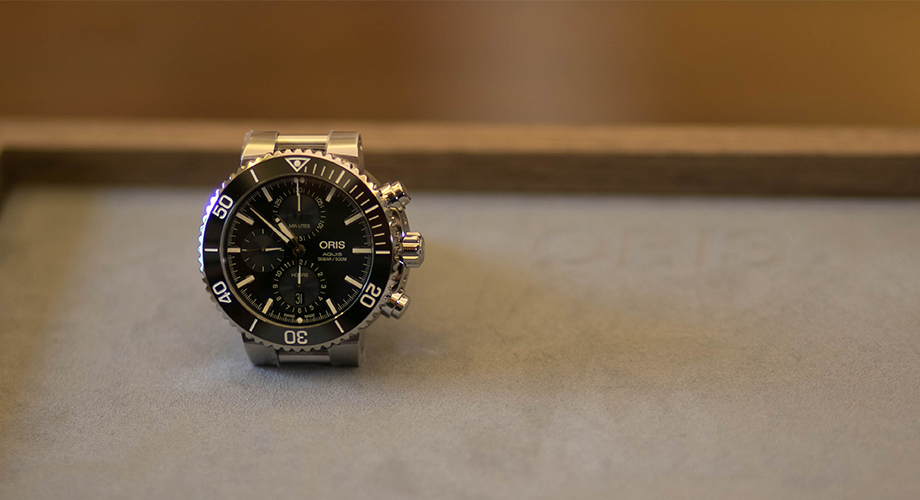 Oris is a mid-range Swiss watchmaker that makes solid and dependable but reasonably priced mechanical wristwatches that (most importantly) survived the death-dealing calamity that was the quartz crisis of the 1970s and lived to tell the tale. In fact, storytelling became one of their company mantras.

“This is what a lot of what we do is all about, said Mr. Meier. “When you have a watch it tells a story. We know what the time is without wearing a watch, so in the end (a watch) more than just a time telling device. It’s telling a story, and it tells your own story, (it shows) a part of your personality, but at the same time it also tells the story of where it came from, from the factory from where it started.”

And it all started with a vision shared by Ulrich Herzog and Dr. Rolf Portman, who together in 1982 led a management buyout of Oris from ASUAG, a group that would later become the almighty Swatch Group, at a time when mechanical watches was the last thing the world wanted.

“Our brand has been around for a hundred and fourteen years now. We were lucky enough to have Mr. Herzog and Dr. Portman who saw the potential with this brand. They saw it’s very rich history and they saw the story, which (they felt) should be told. They went in with everything they had financially and every other sense and restructured the company in (what was) a very difficult time. Lots of other watch companies closed their doors forever and many brands were lost. But they had a very clear vision.”

“We just sharpened our logo earlier this year,” Meier continued, “and we really put out the message of Hölstein and 1904, which is our home and where our factory was founded. And when we look back there have been very clear directions given to the company from the founders that are still valid today.”

And one of those directions was to enact something that was not very popular at the time.

“More than 30 years ago we decided to only make mechanical watches,” continued Meier. “Back then everyone thought, ‘well, that’s a bold move, that’s probably not going to work,’ because this was around the time the whole Swiss industry was collapsing because the much cheaper and more accurate quartz watches were hitting the market.”

Indeed, Ulrich Herzog and Rolf Portman saw an opening in the mechanical field and ran with it. They defined a very clear direction to go mechanical which flew in the face of the continuing challenges of the Swiss watch industry. And that includes its most recent crisis: the smart watch.

“I remember two or three years ago, pretty much every visitor to our booth in Basel was asking me, “so when is Oris doing a smart watch,” or “what is your answer to the smart watch?” But it was funny how simple the answer is: we are a mechanical watch company. We’re not trying to be anything else. If we want a smart function we will find a mechanical way to do it because we find it is much more interesting.”

Which dovetails rather nicely with the brand’s obsession with telling stories.

“Carl Brashear is a great example of how you have a great story on your wrist and its great to see how people respond to it. Generally speaking limited editions are great for us because we are able to tell a story to share with the world. (We can) share the achievements of someone, or highlight a certain cause and be about nature and the preservation of the oceans, which is a theme we’ve explored with Aquis for more than ten years. So, yes just basically telling a story like we did with the Source of Life, a watch that tells the story of the River Rhine that (by the way) flows close to our factory.”

Indeed, at any given time, the watchmakers at Oris are working on the next great story to tell.

“There’s always quite a number of stories that we have in mind and that we’re working on. Right now we’re at mid-year and March 2019 is the big Basel World Fair again, which is the big event every year, so there will be new stories to tell. (In fact) we’re just busy working on them and finalizing them right now.”

We can expect great things from Oris next year, then.