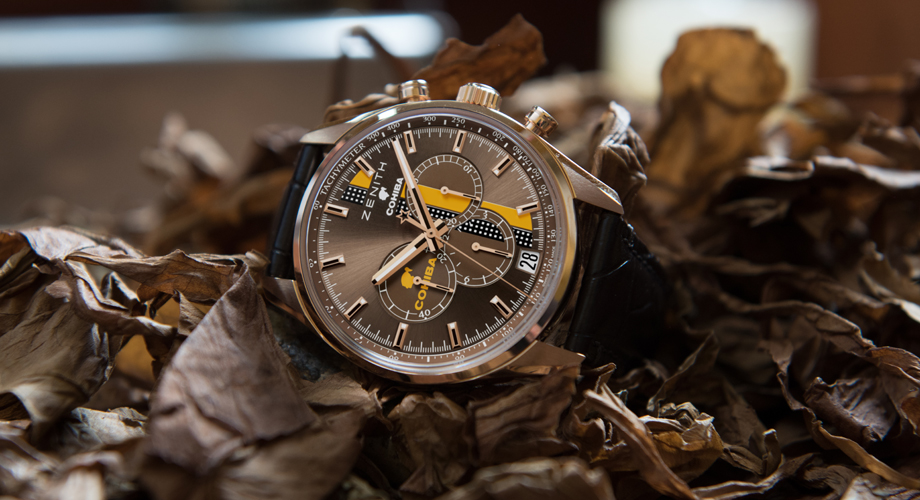 In this world where greatness attracts greatness, this unusual union between Zenith and Cohiba makes sense…. oddly enough. Both born in the 1960s, these two represent the pinnacle of achievement in their respective areas: Zenith’s El Primero as the very first automatic chronograph that has withstood the test of time, and Habanos’ Cohiba as the finest Cuban Cigars for more than 50 years already.

Around 47 years ago, Zenith rocked the world with one of the first (if not the first) automatic chronographs. The Zenith El Primero movement is nothing short of legendary. Despite decades of being in production, its design has remained mostly intact – a remarkable achievement considering that the 2 other automatic movements released in 1969 have fallen by the wayside and have been out of production for decades already. The mere fact that the Zenith El Primero remains relevant today is a testament to the outstanding engineering involved in its inception and creation many years ago.

Zenith started development on the El Primero back in 1962; working round the clock in the hopes of completing the world’s first automatic chronograph in time for its centennial in 1965. Things didn’t exactly happen as planned – it took 7 years to create this outstanding movement, and it was eventually released in January of 1969. However, that very same year the Chronomatic consortium (composed of Heuer, Breitling, Hamilton-Buren and Dubois-Depraz) released the Caliber 11, and Seiko its 6139 movement. Though which movement came first is still the subject of much debate, what is undeniable is the fact that the El Primero still stands head and shoulders above any movement both then and now. As arguably the very first automatic chronograph, it is a must-have for any serious watch collector. The other details such as the El Primero being an integrated, incredibly accurate hi-beat movement (at 36k vph), makes this a perfect example of doing things right the first time.

Zenith and Cohiba join forces for this unique watch that celebrates their respective paths to excellence.

During the early 1960s, Cohiba started with a providential wisp of smoke generated by the private cigar stash of Fidel Castro’s bodyguard. What could be more natural than his employer inhaling that heavenly aroma and trying it out for himself in curiosity? Fidel Castro liked it so much that he contacted his bodyguard’s friend who was responsible for creating this unique blend, and basically helped him set everything up for mass production.

Cohiba became Fidel Castro’s personal cigar. The farms where they sourced the tobacco were the finest in Cuba, and the leaves used were specially selected for their aroma and distinct flavor. After which, this would go through a three-barrel fermentation process which is unique to Cohiba and gives it its distinctive rich, smooth taste.

These two represent the pinnacle of achievement in their respective areas: Zenith’s El Primero as the very first automatic chronograph that has withstood the test of time, and Habanos’ Cohiba as the finest Cuban Cigars for more than 50 years already.

Cohiba was formally launched in 1966, and was reserved only for the highest government officials in Cuba. Due to its quality and very limited production, these were coveted as diplomatic gifts since they were not sold to the general public. Getting them outside of Cuba during that period was impossible. It was only in 1982 when Cohiba became available to the international market, but still only in very limited quantities.

Now 50 years later, Zenith and Cohiba join forces for this unique watch that celebrates their respective paths to excellence. Instead of the customary colors donned by previous pieces that housed the El Primero, this limited edition was draped with the colors of the ‘Flagship of all Habanos’ to accompany its stunning 18-carat rose gold case. The Cuban aboriginal chief Taino’s profile is featured prominently right below Zenith’s logo as the emblem of Cohiba, and is also featured at the leftmost subdial. Cutting across the entire face of the watch is the yellow, black, and white pattern found in the rings of Cohiba cigars. The color of the entire dial has a beautiful metallic brown sunburst cast to it reminiscent of a tobacco leaf. The watch comes with a dark brown alligator strap with a special Cohiba-colored protective rubber lining, and is housed in an exclusive wooden presentation box.

For cigar enthusiasts – this hits all the right notes to honor Cuba’s finest cigar. Every small detail of the ‘Legend of Cohiba’ is a loving tribute to Habanos’ flagship. More importantly, this is an introduction to a legendary movement by a watch manufacture as equally respected as Cohiba. For watch enthusiasts – this is a beautiful and unique El Primero…..simple as that.