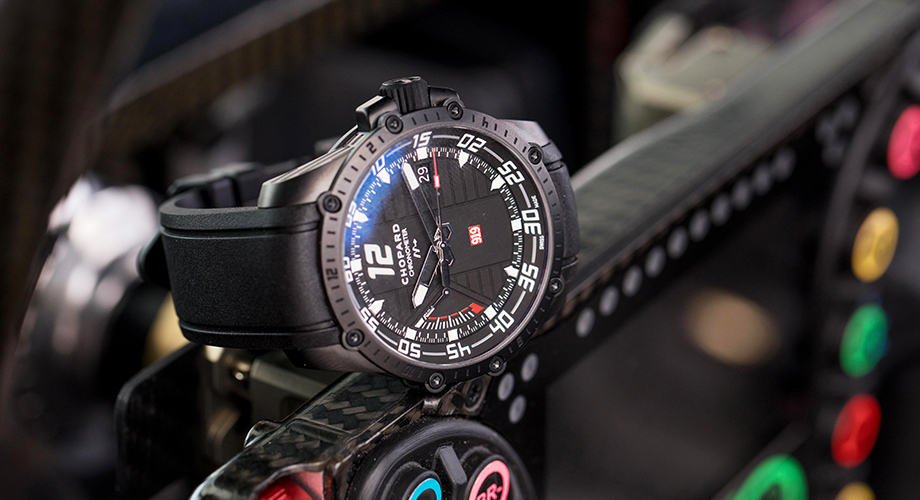 Last June 29, 2018, Porsche Motorsport lapped a new record on the Nürburgring’s Nordshcleife track with Timo Bernhard behind the wheel of a Porsche 919 Hybrid Evo. The German driver blazed through the 20.832 km course in just 5 minutes and 19.55 seconds, breaking the previous record of 6 minutes 11.13 seconds set by Stefan Bellof in 1983 on a Porsche 956 C.

The Porsche 919 Hybrid Evo was developed by Porsche Motorsport for its entries to the FIA World Endurance Championship (WEC) in the LMP1 category. The car was successful, as it won three successive victories for the driver and the manufacturer at the 24 Hours of Le Mans from 2015 to 2017.

On his record-breaking run, Timo Bernhard was wearing the Superfast Power Control Porsche 919 HF Edition watch by Chopard. Its titanium case measures 45 mm and paired with a black rubber strap that is finished like a slick tire profile. Inside the case beats the L.U.C 01.11-M, a self-winding mechanical movement that boasts a power reserve of 60 hours. The calibre’s functions present the hours, minutes, and seconds on central hands. A power reserve indicator is placed at 9 o’clock, and the date is set at 3 o’clock. Through the sapphire crystal case back, the oscillating weight made from heavy metal may be viewed.

The Superfast Power Control Porsche 919 HF Edition is a certified chronometer by the COSC, and is limited to only 100 pieces.