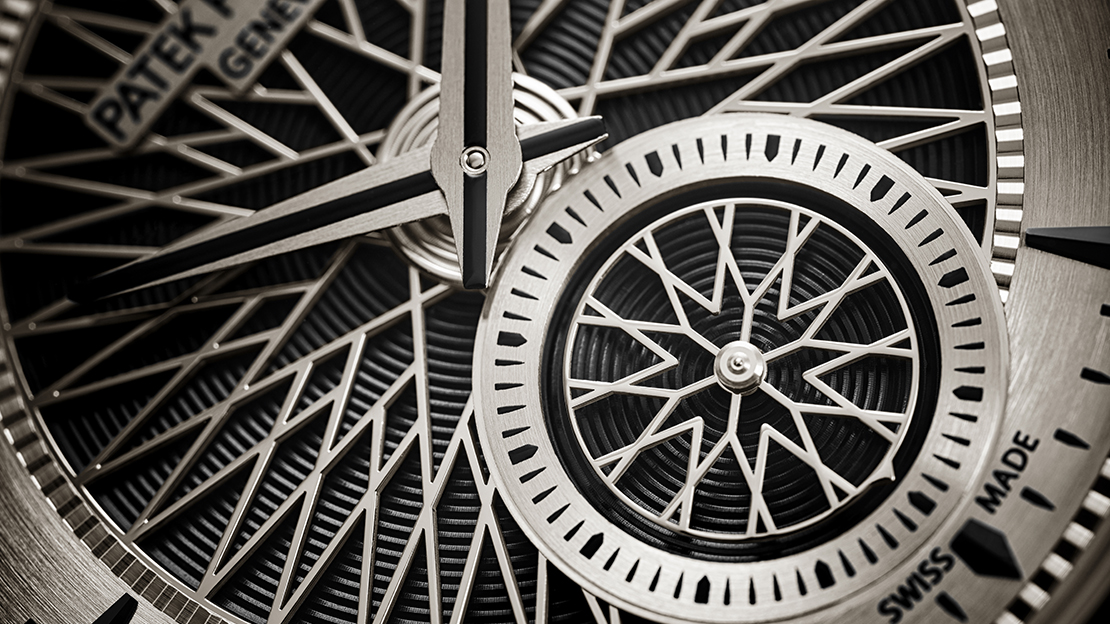 You really have to love the conversations with anyone in the Stern Family. They are so … familial.

My father would probably never have done this, said Patek Philippe President Thierry Stern as he presented their latest Advanced Research special piece. This was because certain details might deviate from the direction of his father, the previous president and current Honorary President Philippe Stern. The design of the small seconds, for example. There is a point that such a design, while stunning, can make readability an issue for some. Note though that this is an Advanced Research timepiece, and there will only be fifteen pieces made. You cannot judge these watches by the usual collection parameters, they often take different directions because they are highlighting particular new technologies. Such as with the visible mechanism on the Patek Philippe Aquanaut Travel Time Ref. 5650G Advanced Research.

A previous advanced research watch, the Aquanaut Travel Time Ref. 5650G-001, showed some of it’s innovative design of the pushers through the face. Though it deviated from the traditional clean Patek Philippe aesthetic, it was really a special collector piece meant to highlight the technical advances. And much appreciated by those it got them.
Note that it is still extremely readable.

Experienced, because while the face of the watch is truly stunning and enchanting and balanced in spite of all its detail, the new development will be best experienced with your ears, and on your wrist. So don’t put this thing in a safe, put it on your wrist. And the sound it makes is wonderful.

We can point out, as Mr. Stern and Mr. Philip Barat the Head of Watch Development did, that the project was meant to enhance audible volume and quality of sound. And the volume, or more importantly perhaps how clearly and how far away the sound will be heard, is impressive. We have been presented with many minute repeaters from different brands before, often presented with a special box on which you set the watch to allow it to be heard at it’s strongest. Not the case here, this was designed to be impressive on the wrist. And numbers-wise, it is. When they used minute repeater Calibre R 27 PS with their usual system, the ability to hear the sound would drop off at around 10 meters. With this new system, and it is this system that is at the heart of the Advanced Research development, that threshold moves to 60 meters.

That is measurable rather easily, of course. What is more important and more pleasurable is how the new watch sounds. Now, understand that unfortunately we were unable to experience this new watch as we do with other Advanced Research presentations, in a small room at Baselworld or in Geneva with an even smaller group of people than the already-small usual groups for Patek Philippe. So we experienced the sound via an online meeting, with Thierry Stern and Philip Barat activating the watch and holding a wrist up to the microphone.

The new sound is astounding in its difference. Richer, deeper, fuller than before. And understand that this is a company that places huge importance on the minute repeater. Forget the craze the world is going through now, true collectors aim for these. And no such watch will ever leave the workshop without a personal test by Thierry Stern or Philippe Stern. They have a history to uphold and a tradition, this is not something you mess with lightly.

The technology of the new minute repeater is quite groundbreaking. They thought long and hard about what changes need to be made, and the result is what they call this new Fortissimo “ff” module. If you know the history of chiming watches and of Patek Philippe, you may well not be able to decide if this is a huge deviation from tradition or a wonderful example of truly out of the box thinking. Because a key component for this new sound is transparent sapphire-crystal glass.

The transparency is a good thing, because you can easily see the much-loved Calibre R 27 PS. Their famous stalwart self-winding (minirotor) movement that in 1989 helped remind the world that Patek Philippe was indeed the king of the king of complications. But the aesthetic reason was not the key point for the choice of material. The wafer of 0.2mm of synthetic sapphire is part of the sound enhancement and amplification system. It doesn’t create the sound, it transmits it. Think of a drum skin, but different. The oscillating wafer is rigid but freely movable, and allows better sound propagation within the confined volume of the watch.

What you will see looking through the sapphire crystal at the back of the watch is something that might look like a very finely-finished steel lollipop. It acts as a sound lever and is attached in the middle of the wafer. The other end looks somewhat like a tuning fork. It is flanked by what you would expect, somewhat, from a chiming timepiece, the hammers. When the hammers strike the gongs, which look traditional and which you can see circling around the inside perimeter of the case, the oscillations from the gongs are transmitted to the sound lever. This amplifies them and transmits them to the rigid oscillating wafer which amplifies them more. This is a purely mechanical and physical system, but not just with what you can see. The angular motion of the oscillating waves excited the air layers, both above and below it. All that is what helps stretch the audible range from around ten meters to around 60 meters. It is surprisingly cleanly executed, all while still allowing a wonderful view of that landmark movement.

There is also a rethinking of how the sound is propagated. For a traditional chiming system, the strikes of the hammers on the gongs create oscillations of the entire timepiece. The case, the back, the sapphire crystal, everything gets involved and has to be accounted for. The materials chosen are key as well. Rose Gold was generally considered the best, platinum being denser was far more challenging. In the case of this new Advanced Research watch and in particular the aforementioned Fortissimo module, the movement and the amplifying system are separate, in that they are “uncoupled” acoustically by the use of a particular composite material. The sound is routed, as we said, from the gongs to the sound lever to the clear wafer, but then it is directed towards openings at 12, 3, 6 and 9 o’clock on a titanium ring. The sound waves actually exit through a narrow slot between the case back and the case band. As such, the case material does not affect the sound. So, the denser and more valuable platinum can now be more easily used.

Platinum is also used elsewhere rather surprisingly, for the hammers which are usually made of steel. This produces a softer strike, which creates a much richer sound but which would have been hard to do before because of the lower potential volume. Now, because of the increase in sound volume, they can much more nicely fine-tune the tones they want to have come off some very special very lucky wrists. Very rare ones too. Remember, only 15 of these pieces will be made.

Platinum is also used for the minirotor, which because of the density of the material can be thinner than if it were of steel. So the same winding power effectively. This allows efficiencies in space that can help offset the thickness of the Fortissimo module itself.

We said that Mr. Thierry Stern mentioned that this watch might not have happened when his father was President of the family-owned watch company. That was because certain things, such as clear readability, could not be compromised. So perhaps the small seconds hand would not have happened, nor the mirroring of its design on the minirotor. Having said that, this watch is an Advanced Research piece. And it is indeed one of the most visually stunning ones they have ever created. The design of the dial face is reminiscent of the spoked wheels of the classic automobiles that Thierry loves. The watch face is gorgeous, intricate and multilayered in look but still balanced and elegant. There is no indication that it is an Advanced Research Patek anywhere on the front (it is on the caseback) unless you know the watch itself. And yes, being a platinum Patek it does have a single diamond nestled subtly in the case, at 6 o’clock.

This new watch is a wonder, and it comes at a wonderful time in history. People need to be reminded, or perhaps even told, that this family-owned Geneva-based Swiss watch company is more than relatively simple watches that people covet. They make technological leaps that others could not. They answer not to numbers but to heart. In meetings or meals, the Sterns will often say things you would never hear from any other watch company boss. Their vision is not just their company either, they know that they are an important part of shepherding the entire industry into the future. This watch is surprising visually, yet very on-point. It produces technical answers to questions others wouldn’t know to ask. The fact that the people most linked to the minute repeater itself are willing to push boundaries on several levels rather than rest on their laurels is soul-stirring.

This truly is a renaissance era of the wristwatch.

Mother’s Day Made Special by OMEGA

Mothers the world over deserve more than just one day to honor and appreciate them. Why not start with picking the perfect OMEGA watch for your dear Mom?

Diving Into the Deep Blue

Explore the seas with the new Submersible.