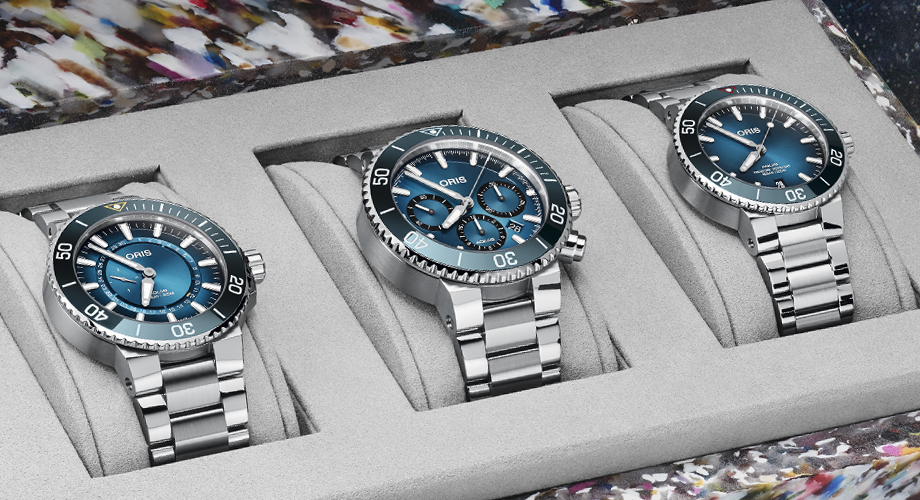 “CALL me Ishmael.” More than a century-and-half after Moby-Dick was published Herman Melville’s opening line for his 1951 novel remains one of the snappiest. It seems right up there with “Once a upon a time….” Only Melville’s is no fairy tale; it was actually based on his experience in a whaling expedition. And, make no mistake, “whaling expedition” in this case means hunting for whales. In short, it was something Oris would not be a part of.

Because what organization the watchmaker has just partnered with is the Whale and Dolphin Conservation (WDC) charity group, which for the past 30 years has been funding research and conservation projects for these creatures — blue whales, in particular.

The WDC said the blue whale may be the planet’s largest animal, but it is now currently listed as endangered, too. Once thought to number around 350,000, WDC said pre-industrial hunting has reduced blue whale population to only between 10,000 and 25,000. These days blue whales are no longer threatened by commercial whaling. But the behemoths — they are about the size of a small airplane, their hearts are as big as a car, newborns measure seven meters long and increase their weight by 3.5 kilograms every hour, they can sing 40 decibels louder than a jet engine at full whack, according to WDC — face other threats like fishing nets, environmental changes that wreck their habitats, and the noise created by anthropogenic activities. Anthropogenic, in case it needs explaining, means man-made.

The WDC aims to stem these threats by involving itself in projects across the world. Some of these efforts include working with local authorities and tour operators off the coast of Sri Lanka, where whales are at risk of vessel strikes, and contributing to blue whale research being done by the International Whaling Commission in the Antarctic Peninsula. WDC scientists there collect information through photo IDs, video tracking and passive acoustic monitoring.

Meanwhile, Oris’s partnership with WDC is part of its involvement with pioneering non-profit organizations dedicated to protecting and preserving the world’s oceans; the watchmaker has actually been at the job for years, most recently through The Oceans Project. With WDC, Oris helps raise public awareness as well as provide generous donations that partly allow for the group’s blue whale research and conservation work to proceed.

One way in which Oris is hyping the projects, and raise funds for these, is by releasing limited-edition pieces of its Aquis diver’s watch line, with each dedicated to a particular cause. At Baselworld this year Oris announced two special watches; the Great Barrier Reef Limited Edition III made for the Reef Restoration Foundation and the Clean Ocean Limited Edition, in turn meant for the Pacific Garbage Screening group.

The Great Barrier Reef Limited Edition III supports efforts to conserve the world’s largest reef system, which has been severely affected by two coral bleaching occurrences in recent years, no thanks to hot summers that warm the ocean waters, causing corals to expel the algae inside them. The Reef Restoration Foundation runs coral-planting programs using coral that survived bleaching.

The Clean Ocean Limited Edition backs the development of a floating platform designed to capture plastic waste in rivers and estuaries before this enters the oceans.

The Blue Whale Limited Edition, intended for efforts at protecting the world’s largest animal, differs from the two previous pieces in that it is a three-register chronograph — the first for an Aquis. It has a 45.5-millimeter steel case rated to be water-resistant to depths of 500 meters (a sapphire crystal cover on top and solid steel screw-in caseback, and screw-in crown and pushers help here), a uni-directional rotating bezel with a ceramic insert and a steel bracelet with diver’s extension clasp. On its aqua blue gradient dial are SuperLuminova-coated hands and indices, and 30-minute, 12-hour and small second sub-registers at 3 o’clock, 6 o’clock and 9 o’clock, respectively.

Powering the watch is Oris’s self-winding cal. 771 based on a Sellita SW 510. Used as a two-register display in Oris’s vintage-theme diver’s watches — the Sixty-Five — the 27-jewel cal. 771 in the Aquis Blue Whale Limited Edition also gains an instantaneous date function (located at 4 o’clock). It operates at 28,800vph and has a 48-hour power reserve.

The Aquis Blue Whale Limited Edition will only be available as part of the Ocean Trilogy set that is limited to only 200 examples. Making the trio more special is that it comes packaged in a presentation case made from recycled PET plastic bottles. WDC says Oris’s choice to transform recycled PET plastic into a high-quality box is a wise one; this helps prevent used plastic from ending up in the oceans and possibly harming blue whales and other animals.

Steps like these do make a whale of a difference.