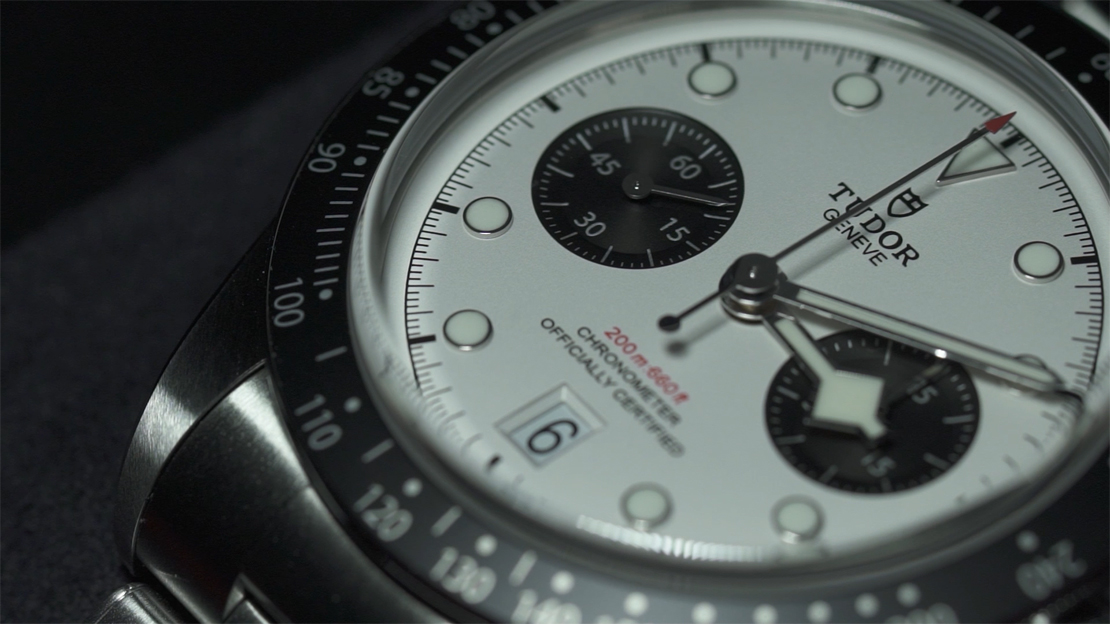 Sometimes non-enthusiasts stare at you when they hear you say “Oh my daily driver” when they just heard someone ask what you are wearing. But the whole car and motorsports worlds regularly meet in the middle for a lot of things. We have “beater watches” for the real rough stuff (winter beaters if you drove in the snow of the midwest with all its salt) and “safe queens” (the automotive equivalent would be garage queen) for watches that rarely get wrist time (think seat time in a racecar). So the daily driver would be what you normally choose to put on your wrist as you walk out the door. That doesn’t mean it needs to be boring. It just means it needs to be robust.

The new Black Bay Chrono is really one of those multi-world watches. It is part of the Black Bay family, which means the open seas and diving to most. But it has motorsports in its blood with the chronometer and the tachymeter scale (now on a matt black anodized aluminum disc). The scale, which most people associate with a way to measure speed as you get past one mile or kilometer, is on a non-rotating bezel. But in the world of dive watches (Black Bay, remember?) you usually have rotating bezels so you can keep track of your time below the surface while you are breathing compressed air (of which there is a finite amount.) Some people took issue with that departure. Personally I think that’s nitpicking. The watch stands on its own. And it stands out as well.

The Black Bay Chrono is a good size and heft, at 41mm in steel and nicely balanced on its bracelet. It isn’t a lightweight, but it also doesn’t create a misshapen lump under your sleeve as some large watches might. It slips nicely under a well-tailored shirt and sports coat sleeve. In the case of the white face/black subdial watch the piece gets attention when people catch a glimpse, whereas the black face with the silver subdial would be a little more subtle. These two models replaces the previous one which had an all-steel bezel, and the new watches are slightly slimmer and have a much more clean look and more individual character. Plus you get the character choice.

Internally the watch is as solid as you would expect. Remember when we said it just needed to be robust? Not our words really, founder Hans Wilsdorf wanted the TUDOR products to be the best possible products at the best possible price. He had, after all, created ROLEX as a pinnacle. So then he wanted to make models that would attain that same standard of dependability but which more people could acquire.

The new TUDOR Black Bay Chrono uses the familiar Manufacture Chronograph Calibre MT5813, with a silicon balance spring, a column wheel mechanism and a vertical clutch. For the daily-use part of the equation, a 70 hour power reserve allows you to put the watch on your desk over the weekend if you choose to use a “beater watch.” Seriously, though, the whole idea of TUDOR is that every watch should be as solid as it can be. The new Chrono is depth rated to 200 meters, and the pushers and crown are screw-down for proper protection and sealing. Very easy to manipulate though.

The watch is a landmark piece, it celebrates fifty years of TUDOR Chronographs. It is nice that you have the choice of the very retro (though also very trendy) white face model or the more discreet black face model. We had the riveted steel bracelet, which is the choice we suggest because buying an extra leather or fabric strap is less expensive than buying a separate steel bracelet. And this watch will make you want to play with straps. We like both other offerings, the “bund” type leather one and the very nice jacquard.

TUDOR surprised people with this watch (rather, these watches). The white face piece we had always drew attention not because of brand (it was new, they didn’t know what it was) but because of the way it looked. Which is as it should be. It was, as we said, quite at home peeking out from under a suit coat, and looked awesome as it lumed up when the light left. But it was more at home against a nice British Moto-Lita steering wheel with polished spokes and a hand-sewn suede rim. Motorsports passion and heritage at its best. Both of them.

That weekend-proof 70 hour power reserve? May never need it.

We use the new TUDOR Black Bay Chronograph to show how a tachymeter works.
Watch here: https://youtu.be/utI-UYzZAz4