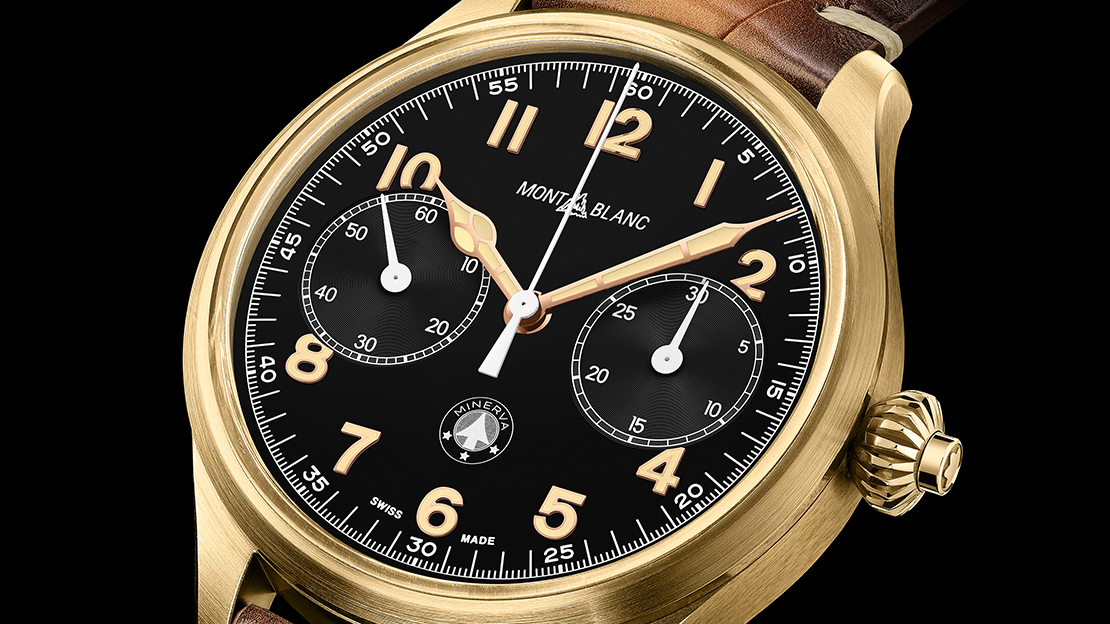 Watch movements are a very interesting thing. Most people don’t pay attention to them or even try to look at them. It may come as surprise to many that among the big storied and historic names of fine watchmaking, many of us that follow such things have taken to a brand that they didn’t expect.

I would always look forward to visiting the Montblanc booth at Salon International de la Haute Horlogerie and at Watches And Wonders. As one of those that follows such things, I have become truly taken by the beauty and intricacy that can be found inside the Montblanc watches and, very happily, always on display at their events.

This new and very special watch is one of those, and is an excellent example of how the company most of us first knew for fountain pens has moved quite successfully into the world of fine watchmaking. And on several levels at that.

This new watch is the Montblanc 1858 Monopusher Chronograph Origins Limited Edition, and it clearly shows how the company can touch different worlds.

It is named “Origins” because it is looking back for inspiration to a timepiece from the 1930s. Specifically, a Minerva military watch.

Minerva is a very historic watch name, with a manufacture facility in Villeret, Switzerland. The beauty of its movements is close to mythic, yet this initial movement went into what was supposed to be a tough, robust military timepiece. And if you do study watches and movements and their design and history, you would find that original watch quite in tune with modern design both for the watch and the internals. Even the size, actually, as the original used a 46mm case. The case size had a reason, it allowed the watchmakers to use their calibre 19-09 that was originally meant for a pocket watch. The case though deviated from the “pocket watch” look of the time and was actually considered quite forward-thinking.

The new watch is surprisingly true to that rather groundbreaking original, while taking full advantage of more modern techniques and abilities. Even metallurgy. The case in a special alloy of bronze. The “Officer” casebook that protects the movement but still allows you to see it uses a special innovative technique to create the image of the Minerva Goddess. Lasers are used in the first phase in order to create the structure, then they are used in a different way in order to achieve the different finishes such as matt and shiny. Finally, the coloring of the image is actually also produced by laser, which is used to generate oxidation. A hugely interesting use of modern technology in a very artistic way.

The new watch uses the manufacture MB M16.29 chronograph movement, which is quite similar to that original. It uses a v-shaped bridge (design protected in 1912, a column wheel, horizontal coupling and a very traditional frequency of 18,000 A/h. Look carefully and you will see the Minerva arrow at the end of the chronograph “blocker”. The main plate and bridges have been left in raw “Maillechort” otherwise known as “German Silver”, which is a premium material that Minerva has used in the past. This gives a slightly yellowish finish, as opposed to a more common rhodium coating. The traditional finishes such as Côtes de Genève, inner angles, circular graining and beveling are all performed at the Montblanc Manufacture in Villeret.

The watch itself is a mono pusher chronograph, with two large and nicely-balanced subdials on a black dial. The cathedral hands are like those on the original, here in a rose gold color with beige Super-LumiNova. The Arabic numerals have the same treatment. A historic Montblanc logo is used and appears above the center of the watch. Below it is a Minerva logo. These match quite well with other vintage touches on the dial, such as railway minute track and the bi-compax counters, all of which appeared on the original watch. The strap comes with a brand new but very vintage-looking brown Sfumato alligator strap with beige stitching.

So what Montblanc has done here is create a surprisingly accurate nod to a very forward-thinking and important piece from its history. And in doing so, it reminds everyone of how watches were both tools and works of art at the same time. This will be a limited edition of 100 pieces, The two comments we hear when people see this watch are.

That’s the original watch from the 1930s? That’s amazing.

That’s isn’t original movement from the 1930s in the new watch? It’s gorgeous.