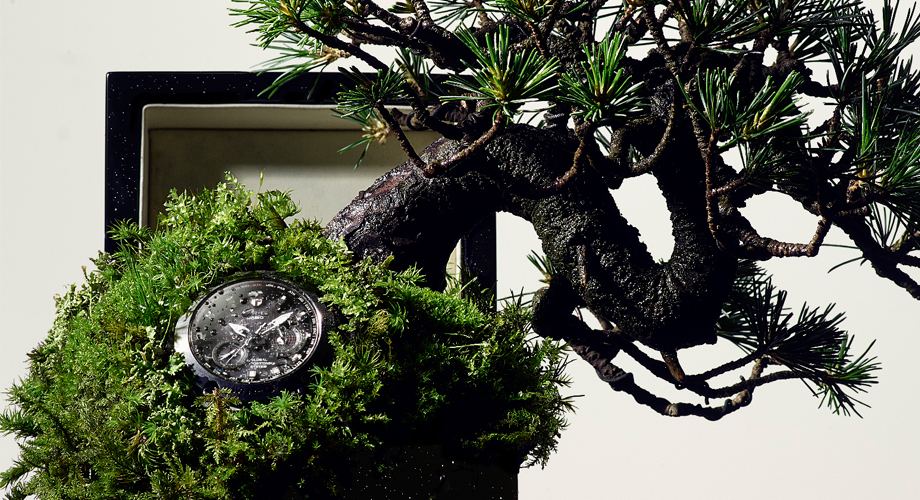 Casio has released a new model of their G-Shock, seemingly grown right out of the roots of the earth.

Casio’s immensely successful G-Shock watches are usually cased in stainless steel set within a rubber bumper. However, they have a high-end segment known as the MR G watches. These are metal-cased watches, and there have been some really unusual examples that have come out to celebrate milestones for the G-Shock. Now, we see a new MR-G G-Shock that fuses the modern Japanese watch technology and battery life of the Casio G-Shock with the ancient Japanese art of shaping miniature trees. The bonsai serves as the inspiration for these fantastic new MR-G models.

The new Casio MR-G G-Shock x Bonsai is a fusion of the G-Shock’s modern technology and the ancient Japanese art of bonsai. Within that union, we see embodied the Japanese ideals of patience, precision, and endurance. Both G-Shocks and bonsai are in it for the long term, bonsai trees with their careful cultivation and true sustainable life force, and G-Shocks with their impenetrable construction, their solar-powered batteries, and their immense reliability. One was made and one was grown, but the same care and planning went into both.

To celebrate the launch of the MR-G x Bonsai, Casio had three different bonsai arrangements done. Each of these bonsai creations takes form around a different aspect of the new MR-G x Bonsai watch.

He whose job it is to mark the passage of time must make himself aware of its effects.

There is the Sennenmidori, which emphasizes the green of pine to symbolize abiding constancy. Then there is the Iwakura, which uses natural rock, symbolizing endurance and toughness. Perhaps most ethereal of these creations is the Soko, which celebrates the state of sublime beauty and charm, even despite the withering effect of time – a soft but inevitable truth which, of all people, the watchmaker must acknowledge. He whose job it is to mark the passage of time must make himself aware of its effects.

Bonsai trees are a product of the Japanese culture. The practice originated in China, and there are similar practices such as those arising in Vietnam, but the art of bonsai as we know it has been adapted, and evolved, by the Japanese. The bonsai of Japan are a small and quiet marvel. They are true trees, cultivated and shaped to miniature proportions, and they can live for centuries. Culture is a pervasive force, one that shapes every aspect of the things it produces; and perhaps such a thing as bonsai trees can only have been adapted within the Japanese culture.

And perhaps the same may be said of G-Shocks. The art of watchmaking is generally seen as Swiss in origin, but the Japanese have taken it and remade it their own unique way. The watches are the inspiration of one man, yes, and they have indeed become a global phenomenon. But the Japanese culture that bore them may have been the only possible ground where such a concept could have taken the path that it did. In the MR-G G-Shock x Bonsai as with the Bonsai trees themselves, we see the idealization of the form. Miniaturized. Perfect.