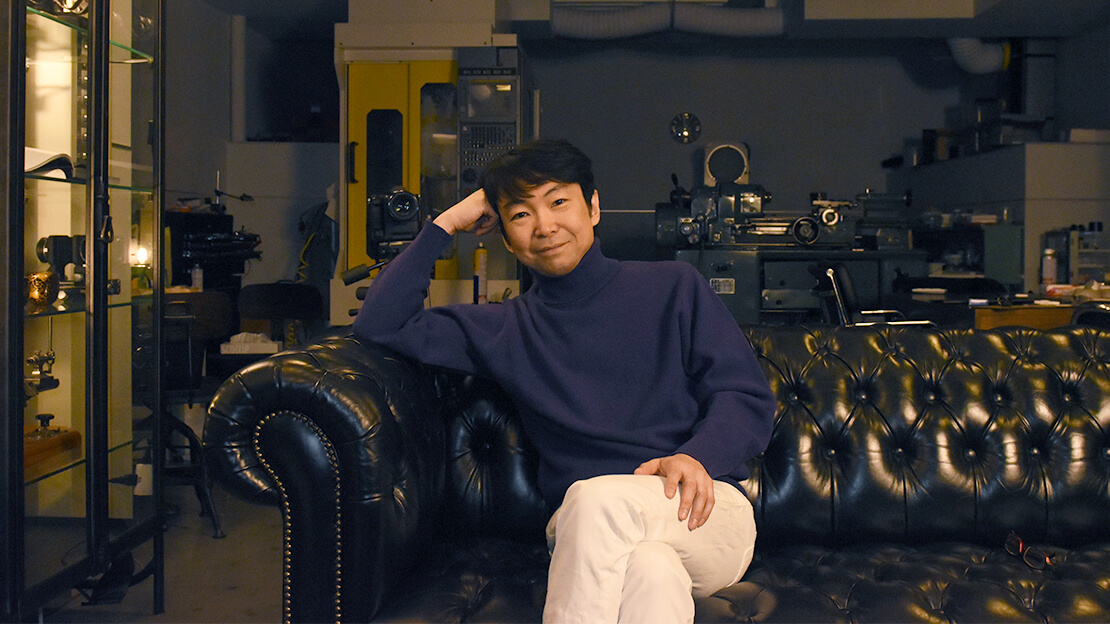 So who are these “independents” we have been discussing so much? Let’s look at one so independent that even many enthusiasts won’t know.

Hajime Asaoka appreciates the right tools for the right job, whether old or new. Here are a vintage lathe and modern machining equipment all within reach.

Hajime Asaoka is a quiet independent watchmaker from Japan. We would see him regularly at the Académie Horlogère des Créateurs Indépendants (AHCI) area in Baselworld, along with the other independents. For the AHCI, independents often means a one-man show, sourcing parts from others while putting them together themselves based on their designs and with their finishing and special touches, or it can mean doing as much themselves as it possibly can. Hajime Asaoka skews towards the latter, with the official AHCI biography stating that he “takes on every part of the watchmaking process himself.”

What is more interesting perhaps is how he learned it all. He is self-taught, with his formal training not from a Swiss watchmaking school but rather the Tokyo University Of The Arts, Undergraduate School Of Fine Art, Design Department. He graduated in 1990, created the Hajime Asaoka Design Office two years later. The production of watches began in 2005, and he announced his first original Tourbillon watch in 2009.

Hajime Asaoka’s atelier workspace, and his instagram feed, show his love for creativity as well as machinery. Here is a live steam model locomotive, that actually runs. Interestingly, another independent who reveres steam engines and machinery is Max Busser.

This may be an example of efficiency, cutting four pieces each of three types of wheels. What it looks like though, is an art piece that combines nature and modern material.

This is just the jig made for holding the Tourbillon while Hajime assembles it. But it is a precision piece in itself.

Parts you usually barely see if at all, beautifully crafted and finished. The collaborations that Hajime Asaoka has are often with the tool creators and machining equipment companies because of his very specific demands and wishes to do everything himself.

If you follow his current official instagram feed, you won’t see finished watches so much as you will see the process, and his fascination with what is involved in the process. His workspace, his inspirations, the parts he creates but separately and treated almost as works of art. Which they are. You may see mention of his “collaborations” with his watches but look closer and you will see mention of the names of tool companies and machining equipment manufacturers. His collaborations seem more about the design and production process more than anything else.

The Hajime Asaoka Chronograph on the left and the Project-T Tourbillon on the right. Project T was created with Yuki Precision, manufacture for aerospace industry and tool manufacturer OSG. Note the ball bearings, those for those Tourbillon carriages are the smallest in the world.

Hajime Asaoka became a member of the prestigious AHCI in 2015. He also became increasingly busy and sought after. While you may contact him and the company by their website, he is being chased by so much demand that people used to go to Baselworld just to have the chance to discuss things with him. That’s one of the strengths of the AHCI by the way, you can have real discussions with the person that makes your watch. Sadly with the 2019/2020/2021/2022… pandemic issues the 2019 Baselworld was the most recent chance to do that, but things will hopefully change.

Hajime Asaoka is, as we have said, a very quiet person, and perhaps the level of demand got to him. So he decided to do something new in addition to his personal hand-created pieces. He created Kurono Tokyo because, as he said, “Personally, I wanted a good, reliable and reasonably price watch I can use as a daily wearer. 25 years ago, one could get such a watch at ¥200,000 – but it is very hard these days, and even less so from an independent watchmaker.”

This was a very daring move, and it was done prior to the COVID-19 pandemic so it was relatively early on after his 2015 induction into the AHCI. Many collectors wish he would have increased his production of his personal atelier watches, but because he really does everything himself that was next to impossible. Not while still doing what he loved, which was being hands-on literally with just about everything. He could have made a second line that was perhaps more haute horlogerie but instead chose to go with a system that would get more pieces and more Japanese art and craft into more hands and clearly distinct from the atelier line. We applaud his choice, and we point to it as the way the whole industry is changing. And lurk on their site, because the Kurono Tokyo watches are insanely hard to get but the way they allocate is open and fair. They have one of the most interesting and aggressive ways of handling their desire to get the watches into the hands of those that will treasure them. Even taking a nod from the Japanese gaming retail industry in the fight against Sony PS5 resellers buying in bulk.

The Grand Hagane, which we will feature hands-on soon, is from Kurono Tokyo, the watch company created by Hajime Asaoka and with production managed by Precision Watch Tokyo Co., Ltd. “I wanted to create something that was more easily accessible, and faster to deliver. Whether for watch collecting enthusiasts, existing atelier watch owners, or just for someone looking for a good watch – I think this mania can be satisfied.

Kurono Tokyo is quite interesting, but it isn’t in any way comparable to the Hajime Asaoka pieces themselves. He is involved in design and creation and execution, but they use case makers and dial specialists and commercial movements. They just dropped their second “Grand” collection watch which uses traditional Japanese handwork like urushi lacquer with, in this case, a Tamahagane design on the face of the Grand Hagane . It doesn’t exactly say this anywhere, probably because it will be almost impossible to do consistently as they grow larger, but the master was said to look over each dial personally with an extremely critical eye. Which may explain why buyers need to understand that they need to be patient.

Follow us for more as we discuss more about Hajime Asaoka, Kurono Tokyo, and the other independent watch companies and all that surrounds them.