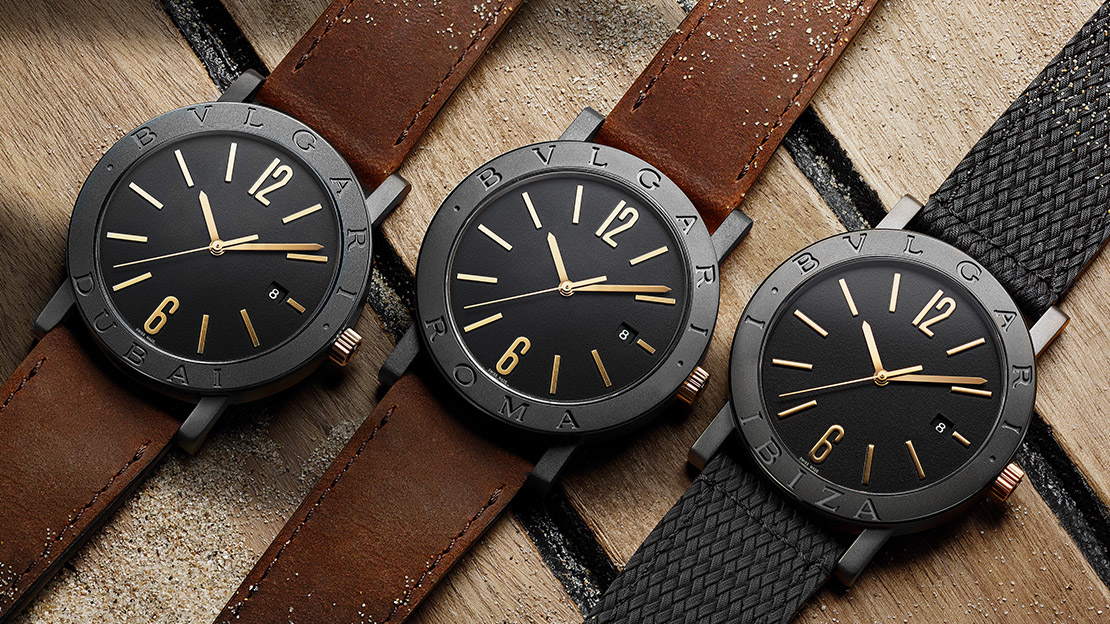 When it was first launched in 1977, the Bvlgari Bvlgari watch was very much a homage to the city of Rome, the brand’s hometown. The watch was created to satisfy the demand generated by another Bvlgari creation the Roma (created as a limited edition in 1975) which was allocated to a hundred of the maison’s best clients. Both these watches were deeply rooted into Roman history particularly architecture and Italian art. For the Bvlgari Bvlgari, the geometry of the watch’s cylindrical case harked the columns of ancient Roman monuments while the bezel was inspired by the imperial Roman coins wherein the name of the Emperor was engraved on the outside of the coin, leaving the center free for his portrait. Over the succeeding years, the watch underwent slight revisions to keep up with the times but the designers always kept the fundamental aesthetic spirit.

For 2020, Bvlgari created a watch that embodied the urban lifestyle anchored on the City Collection. The new watch features a 41mm black DLC-treated steel case. The bezel is engraved with the BVLGARI logo and the name of one of nine cities. Powered by a mechanical manufacture movement with automatic winding, BVL 191 caliber, the watch comes with two straps that can be used interchangeably: one brown calf leather strap and one black rubber strap. Versatile in nature, it transitions seamlessly from weekday to weekend with a dynamic, strikingly current sense of elegance and adaptability. An elegant black grained leather pouch, that is ideal for travel and transport, complements each timepiece.

Now, this is where the fun begins. The watches in the Bvlgari Bvlgari Cities Special Edition 2020 is inspired by nine cities – Rome, Tokyo, Dubai, Paris, London, Ibiza, Milan, Mexico City and NYC. These legendary destinations have hosted Bvlgari in the past and are some of the world’s most iconic capitals. As such, nine artists were invited to create twelve illustrations for each of the watches, the number 12 a nod to the marks on the dial. Each City Edition watch will come with a set of twelve unique art prints created by one of the nine talented young artists enjoined to share their own vision of the cities and their connection to the Bvlgari brand.

The Cities and their Artists

The beating heart of Bvlgari, Rome has always been the wellspring of Bvlgari style. To express its glory, artist Iris Hatzfeld set out to capture its cinematic splendor, rendering its golden light and stunning textures in lush pencil strokes. Its timeless spirit is made modern in the Cities Collection, which reinvents the enduring bond of Bvlgari and the Eternal City, using it as inspiration for the ultimate urban watch.

A high-tech utopia and capital of avant-garde style and sensibility, Dubai is a symbol of the limitlessness of the human imagination. Like Bvlgari, it is steeped in buoyant possibility and executed with daring. To render the city, artist Vincent Longhi used a graphic illustration technique to create a sort of modern impressionism.

Bvlgari has always been drawn to the treasures of Tokyo. To capture the city’s high-tech façade, the digital artist Faunesque employs a state-of-the-art technique to make Tokyo’s most traditional elements feel fresh and futuristic. A magnet for modern urban adventurers, Tokyo’s magic lies in its distinctiveness, a quality that is mirrored in every new edition of the Bvlgari Bvlgari Collection.

Home to its own distinctive Dolce Vita, Paris represents an analog to Italian design and culture. To recreate that connection, artist Jean Aubertin uses delicate watercolor to position Paris as Rome’s twin soul. For urban adventurers, there is no better place to explore than Paris, with its hidden corners and secret spots — so it’s a fitting inspiration for the Cities Edition 2020.

Take a casual walk through the London streets with Clémence Trossevin. Twelve watercolor scenes as a quiet English green comic strip. Trossevin has been gleaning for the signs of Bvlgari’s and the United Kingdom’s shared passion for Gardens and India. Passionate about patterns, she has multiplied them on any available surface of her interior scenes.

Ibiza is a touchstone of Mediterranean brilliance, a sun-kissed jewel sparkling in the sea. Deeply rooted in millenary culture, the Mediterranean soul shines on Bvlgari too. Artist Manon Molesti conjures the aqua waters and electric nightlife of the island. Urbane and chic, it’s a capital of modern leisure and absolutely one of a kind, like the Bvlgari Bvlgari Collection.

Milan is the capital of Italian design and innovation. Likewise, Bvlgari has been at the forefront of many industry innovations — from the first luxury quartz watch to the Thé Vert oversize perfume bottle, the first ceramics jewelry and Bvlgari Hotels. To express that industriousness, the young architect Vincent Macquart renders the city’s unique landscape with an eye on architecture, color and shape. He delights in Industrial Design the way Bvlgari does with Tubogas or Parentesi. Mixing the most modest to the most precious, the modern with the ancient, the huge with the small, Macquart offers us an urban utopia at the scale of this high creativity of the city.

Mexico City is a riot of jubilant color, making it a natural fit for Bvlgari’s enduring passion for brilliant hues. To channel the vibrancy of Mexico City and Bvlgari’s voluptuous spirit, the artist Aline Zalko uses bold lines and spectacular shades. The spirit of Mexico City aligns beautifully with that of the modern, urban adventurer, whose passion for travel and discovery takes him to the world’s most richly textured destinations.

As the capital of the Pop Art scene, New York is the spiritual home of one facet of Bvlgari design: its pop sensibility. Fashion meets cinema in the larger-than-life cityscape of the Big Apple. To recreate that electricity, the artist Natacha Paschal borrows from fashion magazines, reimagining her own scenes in rough gouache strokes. Urban culture is heavily influenced by New York, from street style to the sporty looks that evolve into high fashion. For this reason, the Big Apple was a natural fit for the Cities Collection.