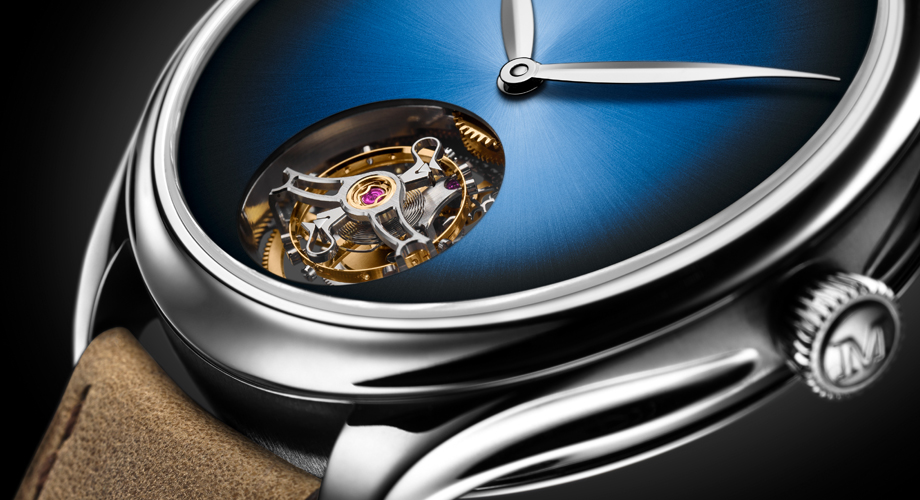 H. Moser & Cie seems like one of those British acting legends who can go cool or go distinguished, depending on the mood. They make watches that can be taken as the very height of classic elegance, and yet they are willing to mess with that very impression. The H. Moser & Cie Endeavour Tourbillon Concept is a timepiece that incorporates one of the most complex mechanical complications, and yet they decided, “Eh. Who needs numbers?”

Probably the most striking thing you notice about the Endeavour Tourbillon Concept watch is the amazing blue dial within that white gold case. (The color, by the way, is officially designated Funky Blue, with a sunburst pattern. I think this tells us a lot about these guys.)

The second thing you notice is that there’s a tourbillon, seated comfortably in the lower half of the dial. Nicely placed, you might say, and then you notice the third thing, which is, the watch has hands but no hour markers. The watch features a tourbillon, plus the bare minimum of things you need to tell time.

You’ve gotta love a brand that incorporates an incredibly precise and complicated tourbillon, and then makes you approximate what the hour might be. I like that dichotomy, and I’m beginning to wonder if I shouldn’t take a look at H. Moser & Cie with a slightly more whimsical eye.

But minimalism per se is not new to H. Moser & Cie. Indeed, it’s something of a signature with them. So perhaps the most remarkable element of the Endeavour Tourbillon Concept watch is the tourbillon itself, which is surprisingly modular. This makes it easy to install, as well as easy to lift out and service. (H. Moser & Cie actually refer to it as “plug and play.”) As H. Moser & Cie puts it, they wanted