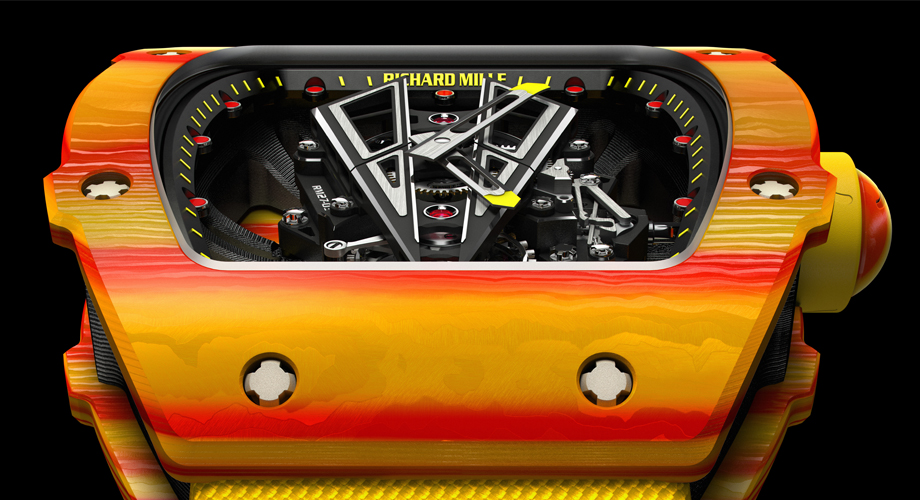 Richard Mille met Rafael Nadal in 2008 through a common friend. Amidst their conversations, Rafa mentioned that he had never worn a watch in any of his tennis matches, nor even entertained the thought of it. Richard saw this as a challenge and proposed to make a watch that was light, robust, and comfortable for Rafa to wear. It took Richard two years to design and create the watch. So in 2010, the RM 027 made its debut on Rafa Nadal’s wrist on the Philippe-Chatrier court at Roland Garros.

The watch weighed less than 20 grams, with the strap. Rafa confessed that the watch felt like “second skin” and he loved it. Nadal went on to win three Grand Slam tournaments that year, including the US Open, a major that seemed to have eluded him until that year.

Richard Mille’s collaboration with Rafael Nadal continued. And in 2013, Richard Mille released the RM 27-01, the lightest tourbillon in the world. For Rafa, 2013 was a red-letter year, for he was able to win 10 titles on the circuit.

The following year, the RM 35-01 was released, combining the spirit of the RM 27-01 with a cable suspension system holding the movement. The watch also featured an all-new Carbon TPT®. Rafa won at Roland Garros once again, making him the only player to win the same Grand Slam tournament nine times. 2015 was a very rough year for Rafa. But as true partnerships go, Richard Mille was behind him every step of the way. This year, the watchmaker released the RM 27-02, an exceptional tourbillon calibre.

Jumping ahead to 2017, Rafa is back in full force, having recovered well from an injury. His “very positive frame of mind” and his rejuvenated strength helped him win La Decima, winning a tournament ten times. Rafa’s victory and achievement was personally witnessed and experienced first hand by the RM 27-03 on his wrist in Roland Garros.

The RM 27-03 has its bezel and case back assembled directly on the baseplate. The Quartz TPT® is composed of over 600 layers of parallel filaments obtained from separating silica threads. These layers, no thicker than 45 microns, are saturated in a white resin, developed specially for Richard Mille, then inserted between layers using an automatic positioning system that changes the orientation of the fiber between each layer by 45 degrees. This process is what gives the RM 27-03’s case its unique look and finish.

The case is made of Quartz TPT® a material composed of 600 layers of parallel filaments obtained from separating silica threads.

The skeletonized Grade 5 titanium bridges hold the going train, barrel, the wheel, and the tourbillon in place. The barrel provides a uniformly constant flow of energy throughout the 70-hour run time. And the strap is one that Richard Mille developed just for the tennis star: a new elastic strap, known as “comfort” band, that offers lightness to the whole watch, making Rafa feel that his watch is like “second skin”. And of course, the yellow and red motif that salutes Rafa’s home country.

Richard Mille designs and creates watches to be worn, not to be kept in a drawer. As a tennis player, the hands and wrists of Rafa experiences shocks from the ball making contact with the racket. Nadal is so powerful that watches may not survive a whole game. His previous watches all had shock resistance qualities, but this new RM 27-03 is the master of shock. It can withstand 10,000 g’s and still run normally.

To give you an idea of how tough this watch is, an amateur tennis player can produce around 60 g’s of linear acceleration on his serve. Rafa, with his strength and playing style, can easily produce well past 100 g’s over the duration of a single point. In the course of an entire match, his watch should be able to withstand high g’s constantly. So is 10,000 g’s of shock resistance too much? Maybe. Maybe not. But who doesn’t want the assurance that your watch will survive brutal tennis matches, time and time again?

In this chapter of watch brand Richard Mille’s history, they took the challenge of making Rafael Nadal wear a watch on court. It started off with the RM 27 made of carbon composite and LITAL. They took on another challenge by making a better and lighter watch in the RM 27-01, weighing in at only 18.83 grams. Not quite satisfied with their achievements, they pushed on to create the RM 27-02 with its unique Carbon TPT® unibody baseplate, and this year, pushed the barrier even further by equipping the RM 27-03 with a tourbillon that is able to withstand extreme shocks of 10,000 g’s.

There are only 50 pieces of the RM 27-03. Will you take on the challenge of owning one of these?