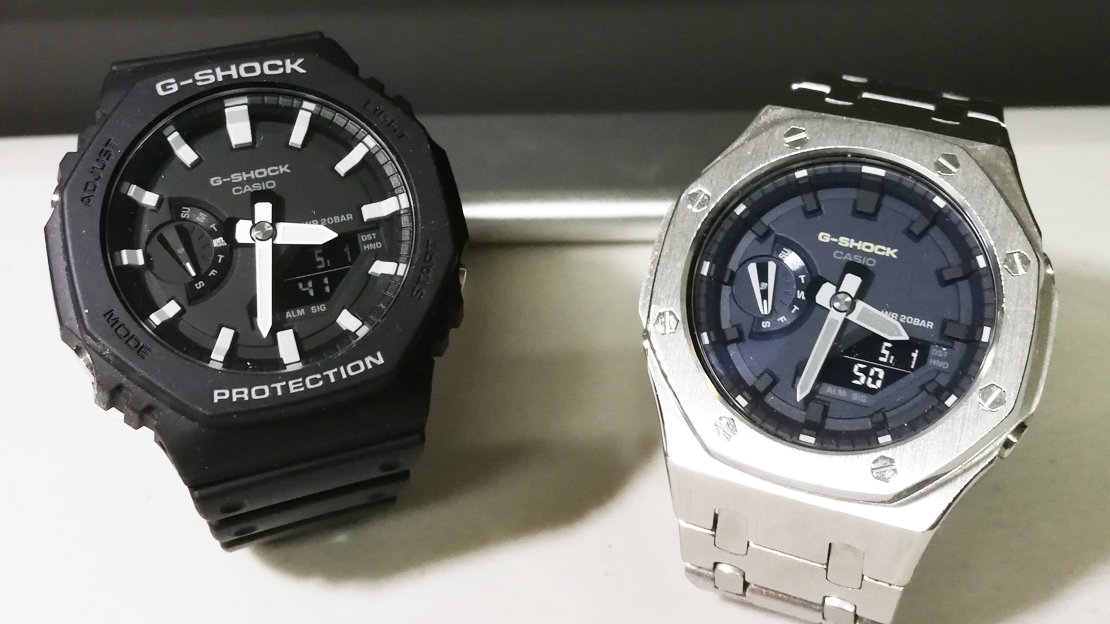 Karaoke was invented in 1971 and basically means minus (kara) oke (orchestra). They also invented the world’s most indestructible timepiece. Kikuo Ibe came out with the first G-Shock in 1983 and since then it had a lot of following.

When Casio came out with the GA2100 “Casi-Oak” sometime in 2019, G-Shock fans quickly snapped it up. It also drew the attention of would-be first time Casio owners because despite Casio’s claim that it was a reimagined newer version of the original 1983 DW-5000C G-Shock with an unequal 8-sided bezel, its equilateral octagonal shaped case actually resembles the Audemars Piguet Royal Oak. This is also the thinnest G-Shock in the current lineup which makes this watch the perfect candidate for a watch mod project for an APRO homage.

First order of the day was to get the watch, or two so one has a spare to keep a stock or to mod again in the near future. The donor G-Shock I chose was the GA2110-ET-2A Blue variant as the donor watch for my AP Royal Oak homage mod project. The quintessential blue waffle dial in stainless steel Royal Oak has been a grail watch for me so that’s why I chose this combination. I got mine from @Tokyo online (link here) which retails for Php 7,660 but it’s out of stock for now. My spare one was the GA2100-1A Black with Silver index (link here) which retails for Php 7,130 but it’s on promo now a Php 6,417.00

Step two was to order the Casi-Oak mod kit, which is available on AliExpress or Lazada in various versions from all steel, rose gold, all black finish and comes either in colored rubber straps or metal bracelets. The first mod kit I ordered was the all steel version and I chose the latest 3rd generation one since it is the closest homage you can get in the market and the mod kit is perfect or close to perfect already. The first generation one didn’t fit so well and did not look to close to the APRO. The 2nd generation one looked closely similar to the 3rd generation but the latest version is the one to get.

Unlike the previous 2nd generation, the 3rd gen kit has an integrated bracelet which is linked to the case. The 2nd gen one uses a strap adapter with a quick release which looks nice enough but your opinion will quickly change to regret once you see the 3rd generation linkages. Finishing on the mod kit was much better than I expected and for a price of about US$100, which includes the watchcase, bracelet and the watch tools is money well spent.

Installing the mod kit does not need the skills of a watchmaker and is a fix one can do for about an hour or so. The kit didn’t come with an instruction manual so I had to search on YouTube and found a few of these how-to videos talking about the 3rd gen Casi-Oak mod kit and how to install them.

Basically, all it took was to remove the 4 screws holding the watch itself and the G-Shock resin protector outer case after removing the original strap which comes off easily with a quick-release feature. My mod kit came with a separate watch case and bracelet so I had to affix the bracelet to the case first. Then I placed the RO steel watch case over the bare watch and snapped it snuggly. When done, just simply screw the four corners to properly secure the new mod case over the watch. The watch remains waterproof and fairly resistant to shock since it still has the original mineral glass case intact with the whole watch.

The steel bracelet comes with independent links and has a butterfly style clasp that locks the watch bracelet together. There are several links that were screwed and not riveted so you can remove some of the links if you have a smaller wrist size like mine. The lugs are flared out quite wide so if you look at the profile, you will know why it doesn’t snuggly fit guys with smaller wrists. But this was negligible and does not take away the fun factor of a DIY mod and having a really handsome timepiece. A quick check on Facebook marketplace tells us the a finished Casi-Oak with the all-steel APRO mod is priced about Php15,000 to Php20,000. My total build bill was about Php10,000 so that makes it a real worthwhile DIY project. One final note, when you screw on the case, make sure to test fit the watch first before screwing with full torque because the flathead screws are quite soft and its difficult to get a second try without messing it up.