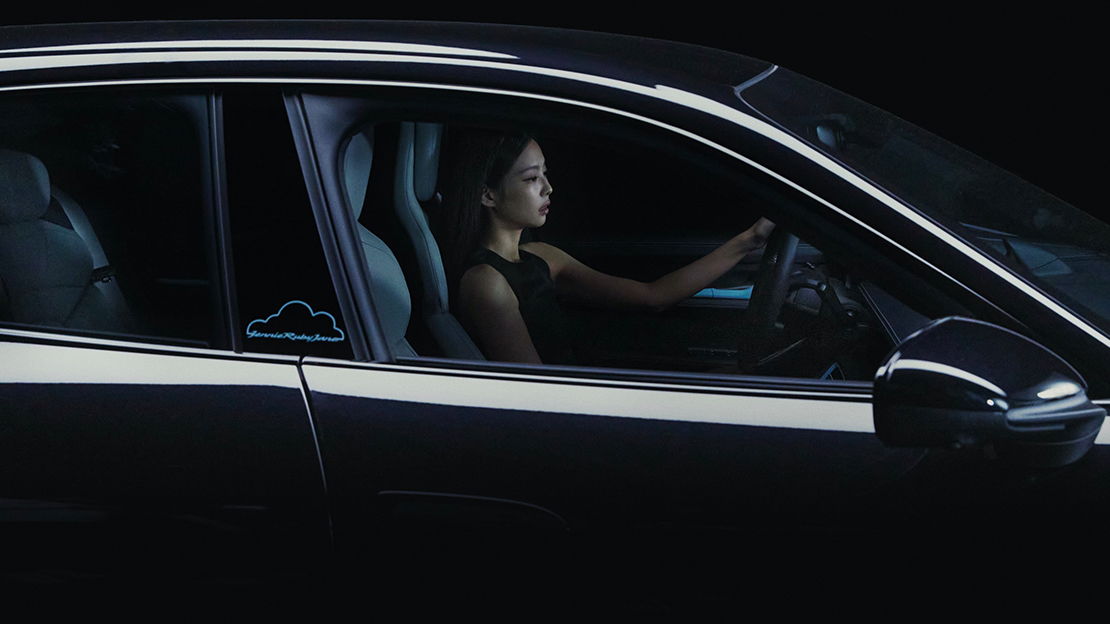 Jennie Kim, known as Jennie Ruby Jane or simply JENNIE, is a famous artist in South Korea. The 26-year-old is a member of girl group BLACKPINK, but has also won the hearts of many fans as a solo singer of rap and K-pop (Korean pop music). As part of the Sonderwunsch programme in collaboration with Porsche Korea, her own personal dream car has been built based on the Taycan 4S Cross Turismo.

Discreet highlights in “Paint to Sample” Meissenblue in the exterior and the interior, as well as a “Jennie Ruby Jane” logo that she created herself, are among the car’s personal features. Painted in a metallic black, the car is named „Taycan 4S Cross Turismo for Jennie Ruby Jane“. The Sonderwunsch model will be presented at ‘the Sonderwunsch Haus’ with the start of BLACKPINK’s world tour in Seoul.

“JENNIE had very specific images of her dream Porsche. The collaboration was accordingly intense and inspiring,” says Alexander Fabig, Vice President Individualisation and Classic at Porsche. “Working together with international customers on these special projects is particularly exciting and enriching. In this case we were also faced with interesting challenges that motivated us as a team to be able to make even the most creative wishes come true.” In a digital workshop that ran for several hours, the experts on the Sonderwunsch team at Porsche Exclusive Manufaktur and the Style Porsche design department worked together with the artist to work out all the details of the Taycan 4S Cross Turismo.

Inspiring collaboration and creative exchange
The car was customised in the Sonderwunsch department of the Porsche Exclusive Manufaktur workshop in Stuttgart-Zuffenhausen. “As an artist, JENNIE is used to creative collaborations. She even brought a mood board to our meeting that visualised the initial ideas and reflected their reception,” Grant Larson recalls. Larson has been with Style Porsche since 1989, and as project manager for special projects he is responsible for Sonderwunsch work within the design department.

“Being able to collaborate so intensively on my own very personal Porsche was an amazing experience,” says JENNIE. “I’m especially proud of having designed the visualisation of the clouds. I spend a lot of time travelling around the world – the sky and the clouds are my travelling companions and a beautiful symbol of these unique experiences. This is why I feel a special connection to them and am so passionate about photographing these nature motifs.”

“It was an exciting experience working with JENNIE from BLACKPINK on Porsche Korea’s first Sonderwunsch project. JENNIE is an influential global icon that represents a generation of young and creative opinion leaders and the ‘Generation Z’ in Korea,” says Holger Gerrmann, CEO Porsche Korea. “I was impressed by her commitment and ideas, which went into her very personal Porsche. With the new Sonderwunsch programme, we are pursuing the goal of enabling people with very different lifestyles to make their dream of the perfect sports car come true.”

Meissenblue accents in the exterior and the interior
Understatement was deliberately chosen for the exterior of the Taycan. Contrasting with the metallic black finish, the 21-inch Exclusive Design rims are painted in Meissenblue. The “Electric” lettering on the driver’s door, the model name on the rear and the cloud logos on the B-pillars are all in this special blue from the “Paint to Sample” programme. The front door entry guards carry illuminated “Jennie Ruby Jane” lettering, with her nickname “NiNi” to be seen in the rear doors. In accordance with JENNIE’s wishes, the Porsche typography of the current 911 generation (Type 992) was used. The logo projector in the front doors projects the clouds onto the ground beside the car. The name of the artist and “Sonderwunsch” appear on the wheel hub covers.

In the interior, the combination of Black, Crayon and Meissenblue creates an elegant ambience. Only the seats and the top part of the dashboard are in Crayon. Meissenblue accents the door panel trim, the borders of the air vents, the cup holders and the top centre marking of the steering wheel rim. The headrests are adorned with the clouds designed by JENNIE. A special indoor car cover was also created with this personal touch. Another special feature also illustrates the attention to detail in this project, namely the black dog box on board for JENNIE’s Pomeranian “Kuma” (Japanese for “bear”). Like the rest of the car, the box is accented in Meissen Blue, including the dog’s name on the front. The cloud appears on the inside of the transport box.