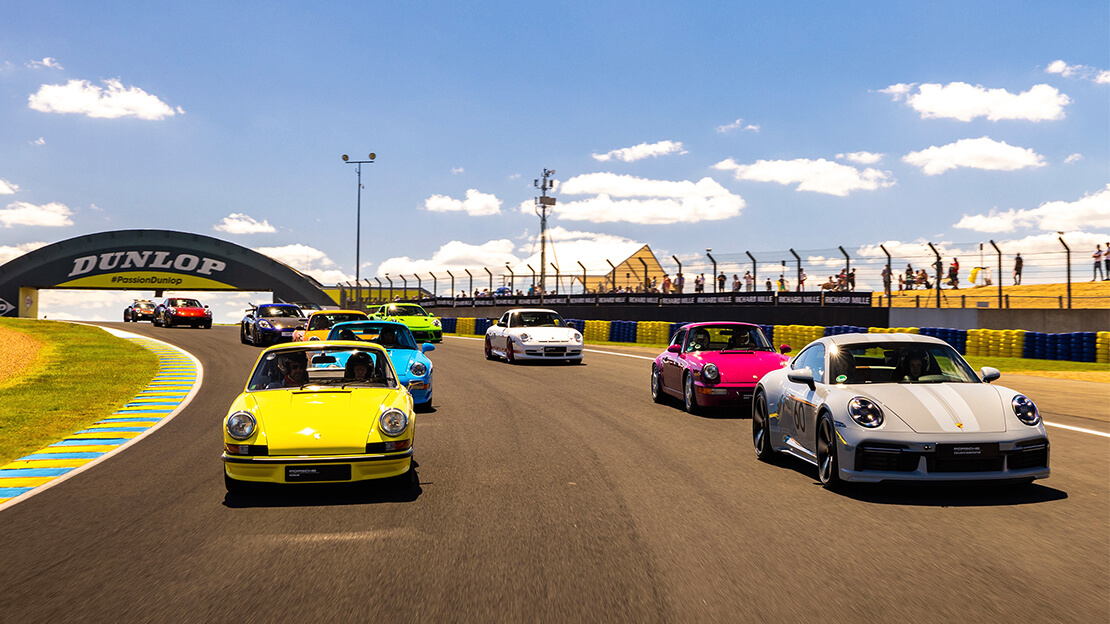 Porsche again played a pivotal part during the 10th staging of the biennial Le Mans Classic. The sports car maker brought out five generations of track-focused RS models to celebrate the 50th anniversary of the 911 Carrera RS 2.7 at the historic motorsport event.

After a four-year hiatus, the Le Mans Classic returned to wow more than 200,000 spectators who had traveled from across Europe and beyond to the Circuit de La Sarthe in France.

Besides the RS models, also attracting the Le Mans Classic crowd toward the Porsche Experience Centre was the new 911 Sport Classic, the second project created as part of Porsche’s Heritage Design program. With its 3.7-litre flat-six delivering 550 PS to the rear wheels via a seven-speed manual transmission, the limited-edition Sport Classic, which itself wears a ducktail rear spoiler in homage to the original Carrera RS 2.7, is the most powerful manual 911 currently on sale.

Another draw for the thousands of Porsche fans who visited the Porsche Experience Centre was the surprise arrival of the 963, Porsche’s all-new endurance racer, which only recently enjoyed its international debut at the Goodwood Festival of Speed. The 680 PS prototype racer, which features a fixed hybrid drive system mated to Porsche’s own twin-turbocharged V8, will be campaigned by Team Porsche Penske in the IMSA WeatherTech SportsCar Championship and the World Endurance Championship. The racecar allows Porsche to compete for outright victory in the world’s most prestigious endurance racing series.

For spectators at the Le Mans Classic, the Porsche 963’s debut appearance at the circuit served as a tantalizing reminder that a Porsche works team will be competing once again for top honors at the legendary 24 Hours of Le Mans next year.

The Le Mans Classic crowd was treated to a series of spectacular on-track displays, including the ever-popular Porsche Parade and the Porsche Classic Race. The Porsche Classic Race saw a variety of Porsche works and customer racing cars, spanning well over half a century of competition, lap the famously fast and demanding 13.6-kilometer Circuit de La Sarthe.

Numerous classic 911 models were flanked by examples of the 904 Carrera GTS, the rare late 1960s 910 prototype, several turbocharged 935 cars, and early 911 RSR examples. Under cloudless summer skies, packed grandstands echoed to the unmistakable sound of the air-cooled flat-six and the whistle and chatter of turbos in their wake as dozens of cherished creations from Porsche’s rich racing past returned to one of their most familiar and fruitful hunting grounds.