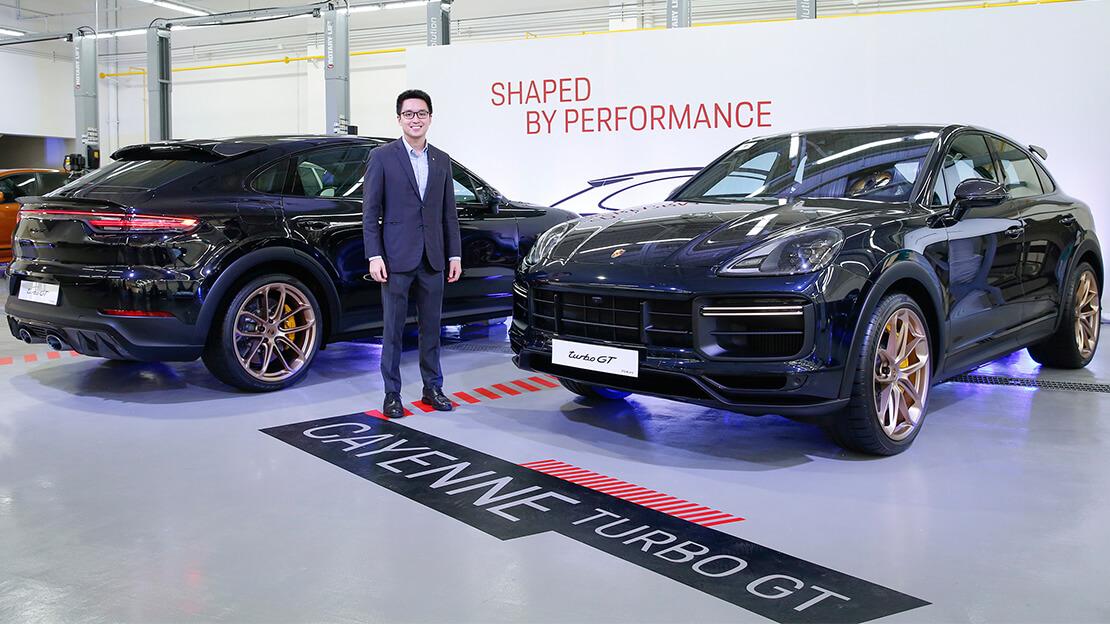 As the Porsche Cayenne celebrates two decades of success, the sportiest version of the brand’s flagship SUV line arrives in the form of the new Porsche Cayenne Turbo GT. Now, Porsche Philippines brings to the local market this sporting hero of the Cayenne model range.

The new Porsche Cayenne Turbo GT is set up for maximum performance and handling, and combines outstanding driving dynamics with the capability to be driven daily. Proving this is that the model lapped the 20.832-kilometer Nurburgring Nordschleife in a time of 7:38.9 minutes, setting a new official record as the fastest production SUV at the iconic racetrack.

Powering the new Porsche Cayenne Turbo GT is a 4.0-liter bi-turbo V8 producing 640 PS and 850 Nm, allowing the model to sprint from rest to 100 km/h in 3.3 seconds and to reach a top speed of 300 km/h. Matched to the engine is a faster-shifting eight-speed Tiptronic S transmission.

The new Porsche Cayenne Turbo GT comes with all available chassis systems fitted as standard, as well as performance tires developed specifically for the model. Its powertrain and chassis are also uniquely set-up, resulting in superb racetrack capability.

The new Porsche Cayenne Turbo GT rides lower than any other Cayenne, with its passive chassis components and active control systems re-engineered and optimized for handling and performance. Its three-chamber air suspension is more rigid, and the damper settings of the Porsche Active Suspension Management, as well as the application of the Power Steering Plus and rear-axle steering, have been adapted accordingly. The Porsche Dynamic Chassis Control (PDCC) active roll stabilization and Porsche Traction Management (PTM) systems now operate with performance-oriented control software. All of these lead to improved roll stability and road-holding, as well as more precise turn-in behavior at higher cornering speeds.

The new Porsche Cayenne Turbo GT underlines its exceptional athleticism through progressive design features. With even sportier lines and available exclusively in four-seater Coupe configuration, the latest model is chiefly defined by a unique front apron, enlarged side cooling air intakes, a contoured carbon roof, black wheel arch extensions, and 22-inch GT Design wheels in Neodyme. It has carbon side plates fitted lengthwise to the roof spoiler, which are specific to the GT model. Also unique to the GT is the adaptively extendable rear spoiler’s lip, which increases downforce by up to 40 kilograms. The model’s rear is finished by a striking diffuser panel made of carbon.

Complementing the sporty character of the new Porsche Cayenne Turbo GT are premium standard equipment. Among these are 18-way Adaptive Sports Seats in front, a sport rear seat system, and a multifunction sports steering wheel. Also fitted to the model is the latest Porsche Communication Management (PCM) system that has a new user interface and operating logic. It is fully compatible with Apple CarPlay and also allows for in-depth integration of Apple Music and Apple Podcasts. In addition, the infotainment system now also includes Android Auto.

In 2002, Porsche successfully started a completely new market segment with the introduction of the original Porsche Cayenne, a luxury off-road vehicle that at the same time was a highly emotive sports car. With the arrival of the new Porsche Cayenne Turbo GT “Supersport Utility Vehicle,” the model again sets the bar for production SUVs — just as the first-generation Porsche Cayenne Turbo S did two decades ago.