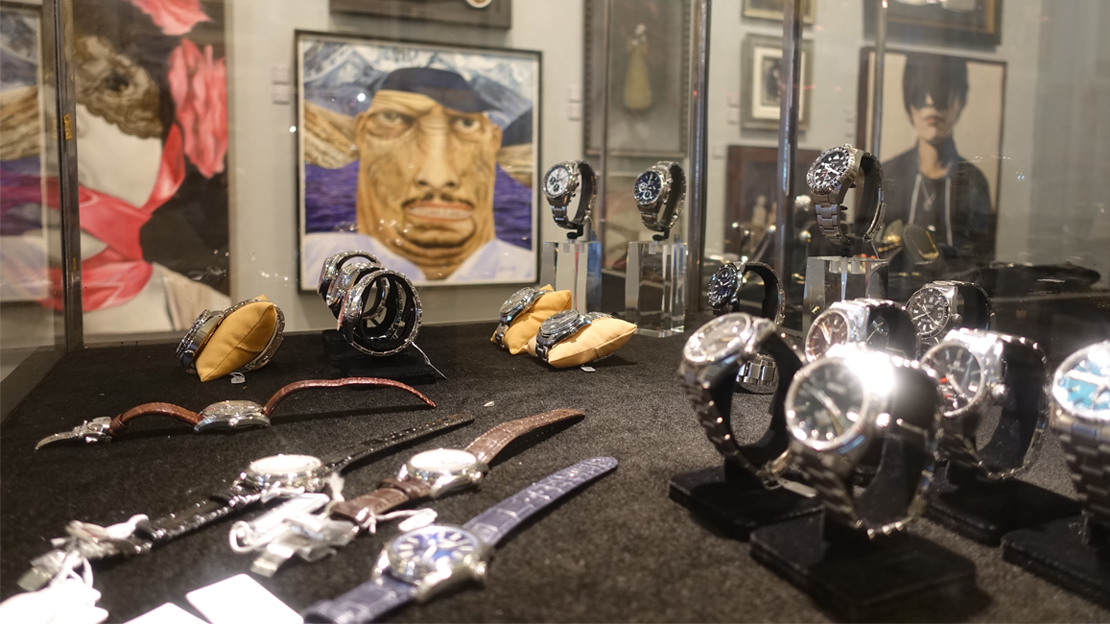 MOZART seems to shield the place from the oppressive noonday heat outside. Of course, the open spaces of the hall, not to mention industrial-strength air-conditioning, are what keep things cool.

But it’s the sight, oh it’s the sight, of timepieces (and jewelry) housed in glass cabinets which really takes one away from the buzz of the outside world. True, the paintings hanging on the wall, surrounding the Patek Philippes and Rolexes, Panerais and Seikos, also serve as reminders of life in another plane, viewed as this may be from alternative perspectives. But here, and with apologies to a Garibay or a Robles, they may seem like gift wrappers; the ticking wrist machines are the attraction.

Well, to a lot of watch guys, at least. Because, consider this: there is a “Paul Newman” Daytona in the room.

Besides the “Paul Newman” ref. 6239, pieces to choose from are a couple of Patek Philippe Calatrava Travel Time from the mid-2000s; the grail Patek Philippe Nautilus ref. 5711/A (new, at that); an Asia-exclusive Richard Mille RM 030; a Vacheron Constantin Historiques American ref. 82035/OOR-9359; an Audemars Piguet Royal Oak Offshore Triple Calendar; a Rolex GMT-Master II BLNR with an Oman Khanjar logo on the caseback; and several more Rolexes, including a Tiffany-signed Submariner, a GMT-Master ref. 6542 and a “meters-first” Sub.

Sprinkled among these are numerous other Rolexes and Patek Philippes of various vintages, a boutique edition Panerai Radiomir 1940, a limited edition A. Lange & Sohne 1815 200th Anniversary F.A. Lange, an IWC Da Vinci Perpetual Calendar Chronograph, a Richard Mille RM 028, an Omega Speedmaster Moonwatch Dark Side of the Moon and an oversized Cartier Tank Anglaise lined with diamonds.

An interesting feature on the display floor is a 22-piece collection of Grand Seiko and Seiko watches, which will be auctioned off as an entire lot rather than as separate items.

There are several accessible pieces as well. Counted in here are some Tudors, including a Submariner from 1992; a Piaget, a Girard-Perregaux and an Audemars Piguet from the 1970s; and a range of ladies’ pieces.

It’s best, then, to head out to Finale Art File at Warehouse 17, La Fuerza Compund on Don Chino Roces Avenue in Makati City to check these, and more other items, out. Go.