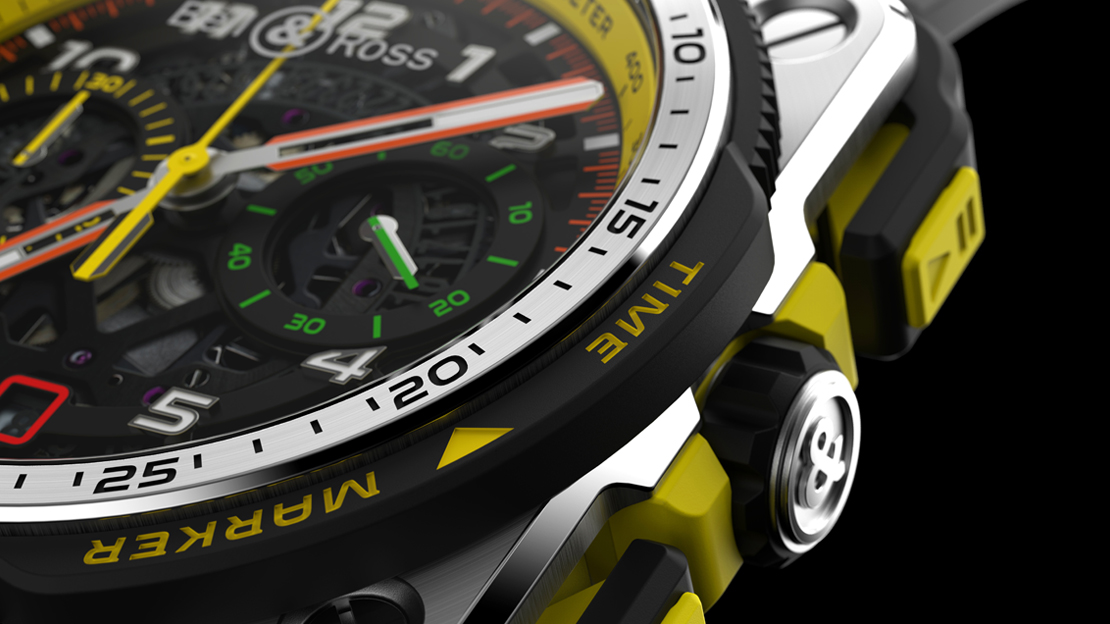 FIVE races down, 16 to go. This sums up the 2019 Formula 1 season thus far. And though it’s starting to look like the championship will be a contest between two drivers wearing the same uniform, the sport’s appeal remains strong. Livening this up are the stuff happening around the podium.

The first two models in the collection are the Bell & Ross BR V3-94 R.S.19 and the BR 03-94 R.S.19. The pair shares an engine, has different chasses. Identifying the watches are their carbon-fiber dials — sooo F1 — and bright yellow accents mimicking the steeds of Renault F1 drivers Daniel Ricciardo and Nico Hulkenberg.

The BR V3-94 R.S.19 sports the classic circular case of Bell & Ross’s Vintage collection. It has grown, however, to 43 millimeters. The BR 03-94 R.S.19 opts for the 42-millimeter-square case of the brand’s Instrument line. These represent each watch’s respective chassis.

Sitting over the dials are furniture rendered in Renault F1’s signature yellow and black colors, as well as the green, red and orange found on cockpit buttons. Both models are fitted with a bi-directional bezel for “on-the-fly” timing. The bezels have knurled edges so these could be turned by gloved hands.

Under the bodies of this R.S.19 pair is Bell & Ross’s cal. BR-CAL.301, an automatic movement with 30-minute and 12-hour counters, as well as a central chronograph hand. It can time events accurate to an eighth of a second.

Offered in even less numbers — only 250 — is the Bell & Ross BR-X1 R.S.19. It features ergonomic “rocker” chronograph pushers, again suitable for gloved hands, and the same high-contrast color palette. The watch takes weight reduction more seriously, though; it has a skeletonized dial, revealing the mechanical bits underneath, and its 45-millimeter-square case is constructed from PVD-coated grade 5 titanium. A ceramic and rubber bumper wraps over the case.

Debuting on the BR-X1 is a time marker placed outside the watch’s bezel ring. The feature lets team members compare the elapsed time for a lap with that for the next. To do this, they only need to point the spot where the chronograph’s yellow running seconds hand was stopped; just rotate and align the marker’s yellow triangle to the spot. When the chronograph is activated and stopped for the succeeding lap, team members can then determine if the elapsed time was slower or faster than the last one.

Taking pole among Bell & Ross’s Renault F1 Team lineup is the BR-X1 Tourbillon Chronograph R.S.19. Completing a full 360-degree rotation every minute (evening out the effects different positions have on a balance wheel), the tourbillon houses a small balance wheel to keep the mechanism compact. Complementing this haute horlogerie touch is a mono-pusher column wheel chronograph that has 30-minute and 60-second counters. The watch’s 35-jewel, hand-winding cal. BR-CAL.283, which spins at 21,600vph and packs a 96-hour power reserve, peeks through a lightweight, skeletonized dial.

Like the BR-X1 R.S.19, the Tourbillon Chronograph rendition is housed in a 45-millimeter-square case fashioned from a mix of titanium, ceramic and rubber. The watch also gets the timer marker wrapping over the bezel.

Only 20 examples of the BR-X1 Tourbillon Chronograph R.S.19 will be built, each one a turbocharged triumph of precision engineering and passion.