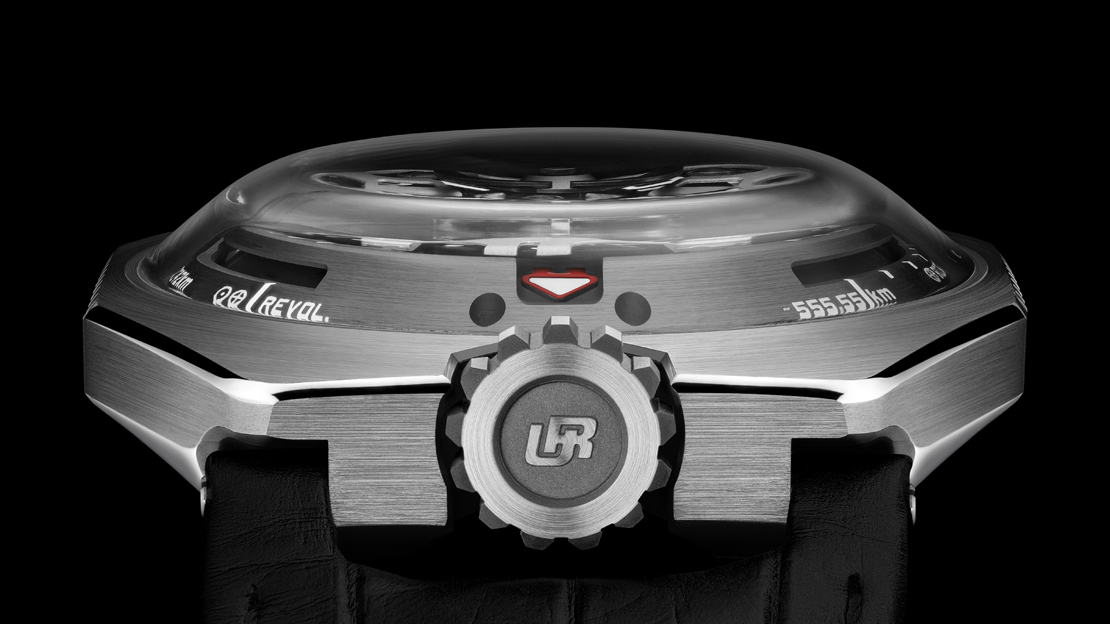 A CLOCK on a moving frame — say, on a spacecraft — will tick slower than one that is at rest (like if it were placed on a desk). Space and time are relative. A moving object experiences time at a slower rate than one that is immobile, as Einstein’s work on space-time continuum — the relationship between the three dimensions of space and time — has shown. Of course, gravity affects time as well. These “distortions,” basically, are known as time dilation.

The UR-100 SpaceTime relies on the brand’s wandering hour and minute display. This discards conventional hands in favor of three rotating discs mounted on a carousel — which, as its name says, rotates as well. Each of the discs has revolving hour indications, with the numeral emerging clearly from the openworked cages reading out the hour. This display comes from the disc nearest to the minute track at 6 o’clock, which in turn is scaled 60 to zero from left to right. A prominent red arrow points to the minute.

When this red arrow reaches the 60-minute mark, it disappears beneath and between the other discs on which the hour numerals are printed. The arrow then re-emerges on a narrow aperture around 10 o’clock to indicate the distance the Earth has traveled on its axis as based on the average speed of its rotation, which computes to 555 kilometers every 20 minutes. A scale provides the distance traveled information.

In the meantime, the minute indication at the start of a new hour is taken care of by another red arrow that is carried by one of the three revolving discs (each disc has an arrow, and all three discs rotate around the watch’s dial because these are mounted on the carousel).

Opposite the aperture at 10 o’clock (which means at 2 o’clock) is another hand, carried by another disc, which points the distance the Earth has traveled on its orbit around the sun. This, in turn, computes to 35,740 kilometers every 20 minutes. Again, a scale indicates the distance traveled.

In short, the UR-100 SpaceTime does live up to its name by telling the time, as well as two indications related to space travel.

Urwerk chief designer Martin Frei says watches represent a “philosophical dimension” to him as these provide a “physical and abstract reproduction of our situation on Earth.”

His colleague, Urwerk master watchmaker Felix Baumgartner, agrees, saying; “We live in a universe governed by three dimensions — time, rotation and orbit — that we attempt to measure and master, but what escapes us is this notion of spacetime.”

Frei and Baumgartner, by the way, co-founded Urwerk in 1997.

Baumgartner adds the UR-100 SpaceTime is inspired by a 19th century pendulum clock given to him by his father, a clock restorer. The pendulum clock made by Gustave Sandoz for the 1893 World’s Fair in Chicago has a regulator-style dial that does not show the time but instead the distance of the Earth’s rotation at the equator.

Powering the UR-100 SpaceTime is the brand’s cal. 12.01, a self-winding ticker whose rotor is regulated by a flat turbine meant to minimize shock reaching the rotor bearing, as well as prevent over-winding the spring. Turn the watch over; on its sapphire crystal caseback window can be seen this peculiar turbine, which looks more like a tiny propeller.

Actually, and in contrast to the visual complexity of the mechanisms on the dial, the cal. 12.01 looks quite restrained; most of its components only peek through the numerous holes on a black plate placed in between the rotor and movement to which it attaches. The cal. 12.01 is fitted with 39 jewels, beats at 28,800vph and has a 48-hour power reserve.

Just as tempered is the case wrapping over the UR-100 SpaceTime. All right, it is edgy, but it is also almost industrial because of its sparse surfaces. Plus, it is relative restrained at 41 millimeters wide and 14 millimeters thick. Sapphire crystal seals it on top. The watch wears its crown at 12 o’clock. A leather strap secures it to the wrist.

The UR-100 SpaceTime is available in the Iron model, which sees its case in a combination of titanium and steel, and in the Black rendition, also in titanium and steel but is now covered in black PVD. Both versions are limited to 25 pieces each.

And both offer a fresh look at space and time.