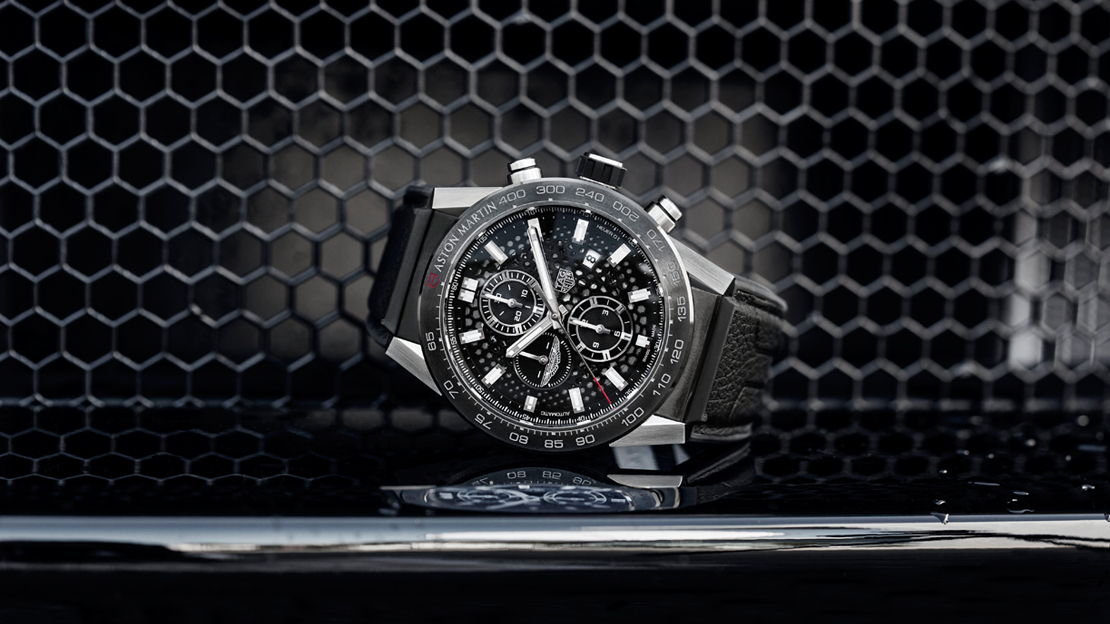 WHILE TAG Heuer and Aston Martin were rumored to have flirted with the idea of collaborating on a watch project since a decade back — there were the low-volume TAG Heuer Vanquish of 2005 and the Monaco DBR9 circa 2008 that’s said to be the prototype of the Monaco Twenty-Four; both models seeming ties with Aston Martin were supposedly coincidental though — the deal was actually consummated only in March at the Geneva International Motor Show. As Aston Martin unveiled its new Vantage alongside the model’s GTE racing version at the show, it also declared TAG Heuer as its official watch partner.

Announced in line with this were two timepieces; one was the quartz-fired Aston Martin Formula 1 chronograph, the other the Carrera Calibre Heuer 01 Aston Martin Special Edition. While the quartz piece has already been available in the market for months now, the Carrera Calibre Heuer 01 has just been announced as going on sale at TAG Heuer retailers worldwide and on the brand’s online stores.

Unequivocally powered by TAG Heuer’s self-winding cal. 01, a column wheel chronograph with 39 jewels, 50 hours of power reserve and which spins at 28,800vph, the Carrera Calibre Heuer 01 has a 45-millimeter, 100-meter water-resistant steel case which flaunts a variety of surface finishing — including some portions in brushed titanium carbide, a ceramic black brushed tachymeter bezel inscribed with an Aston Martin marking, and some lines meant to evoke images of the racetrack and pistons. The watch has a semi-skeletonized dial whose hexagonal pattern recalls the mesh grille and other details of the Vantage.

Unlike the “regular” Carrera Calibre Heuer 01, the Aston Martin piece gets different 30-minute and 12-hour counters (located at 12 o’clock and 6 o’clock, respectively). An Aston Martin badge sits within the second subdial at 9 o’clock while a date window peeks through near 4 o’clock. Also exclusive to the Aston Martin version are reshaped lugs, which take their cues from the carmaker’s bodywork.

“This timepiece is a beautiful reflection of the design language of both Aston Martin and TAG Heuer. The collaboration provided a fascinating opportunity for us to work with the creative talents at TAG Heuer to design a product that truly showcased beautiful bespoke craftsmanship that reflects the importance of peak performance. Each watch will provide its owner with a taste of the Aston Martin luxury lifestyle where there is attention paid to every detail. They will also enjoy the craftsmanship and build quality that is synonymous with the two brands,” says Aston Martin vice-president and chief creative officer Marek Reichman.

Hard to argue with that.