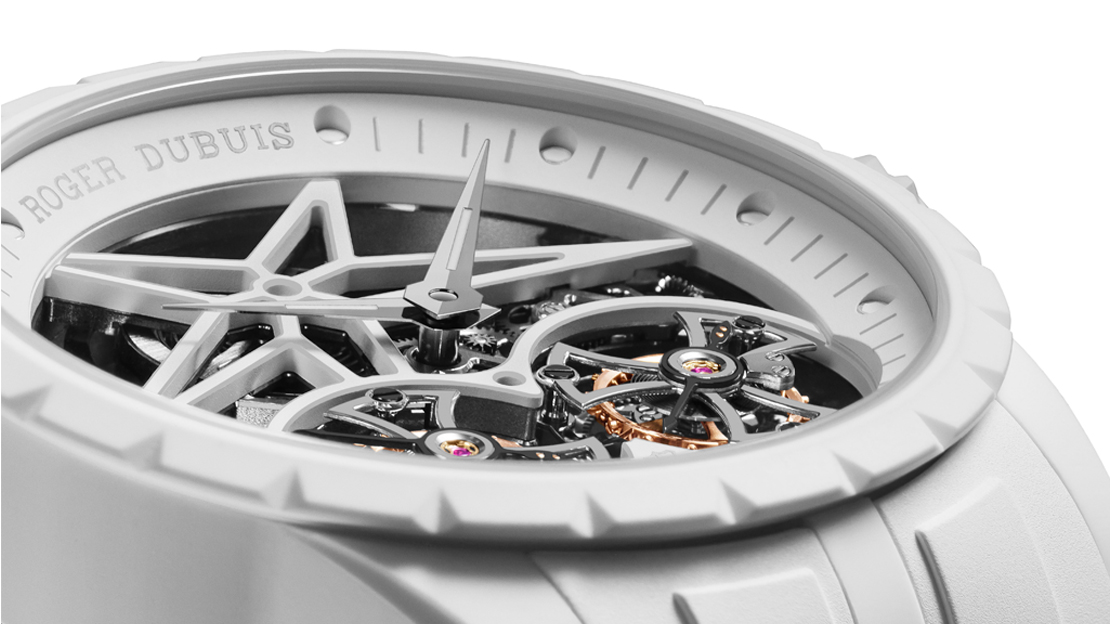 The first time I had the opportunity to visit the SIHH in Geneva way back in 2008, one of the revelations that blew me away then was the Roger Dubuis skeletal double tourbillon. If I remember correctly it was referred to as the EX45 clad in black PVD. As the year went on and the brand underwent several evolutions, the timepiece followed suit. In as much as the case material and the visual aesthetics came and went, the DNA of the watch stayed the same.

The 45mm Excalibur Twofold glacial touch is enhanced by the bezel and case crafted in Mineral Composite Fiber (MCF), a white-as-snow composite material made from 99.95% silica developed by Roger Dubuis engineers and never before seen in the world of Haute Horlogerie. The manufacture’s ability to make use of MCF is the result of their proficiency and mastery of the Sheet Molding Process (SMC) whereby a white epoxy resin is introduced to carbon fiber resulting in a white that will not turn yellow over time. The upper plate of the skeletonized movement is made of MCF and thanks to a patented process, every angle of the MCF-coated bridges are given a SuperLuminova treatment and because of the MCF, the luminescence can last sixty percent longer than standard luminous coatings.

The last but not in any aspect least world premiere has to do with the Excalibur Twofold’s strap. Made from specific FKM rubber based on a world-first technology referred to as LumiSuperBiwiNova” (yes, I checked twice), parts of the strap emit a luminescent glow in the dark.

The Excalibur Twofold (Ref. RDDBEX0900) is limited to 8 pieces.