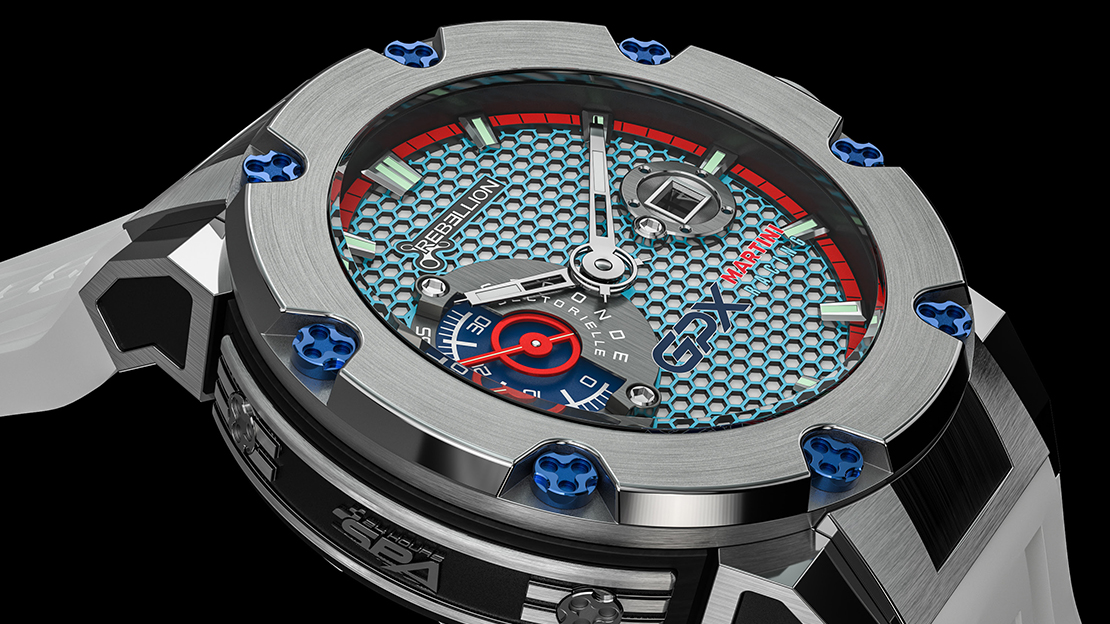 Building on their common DNA from motor racing, Rebellion Timepieces and GPX Racing are proud to be a major part of international endurance racing competitions this season. On 2 and 3 December 2021, the duo will meet again during the Historic Dubai Grand Prix Revival by Gulf Historic as main partner and organiser respectively. This major event is held at the same time as the Expo 2020 Dubai UAE, the celebrations of the 50th anniversary of the creation of the United Arab Emirates and the 40th anniversary of the 1981 Dubai Grand Prix, the first circuit race in the Persian Gulf.

In the build-up to this historic event, the two brands met at the legendary Belgian racetrack of Spa-Francorchamps for a spectacular weekend of racing, during which two GPX Racing watches, each being part of a limited edition of 20 pieces, were presented.

Chic duo with a striking style
The Predator 3 Hands GPX Racing takes on the finery of the original model created by the inspired designer Eric Giroud. For optimal reading in all light conditions, the hour and minute hands point to rhodium-plated indexes coated with Super-Luminova®. This temporal information evolves within a décor that bears the team’s emblematic colours. Its multilayer dial with a sky blue honeycomb base is encircled by a bright red flange. The sequential second hand is in the same deep colour as the ring on the winding crown. Cobalt blue enhances the piece, particularly the eight screws adorned with the Rebellion logo positioned on the bezel. The light and robust 48mm diameter titanium case protects the RE-9 automatic movement developed by Concepto.

The little sister of the Predator S 3 Hands, the Predator S GPX Racing has an equally original and bold design, inspired by the automotive world. With its relatively small size, 42mm in diameter, this resolutely sporty and contemporary titanium timepiece suits all wrists, both male and female. It nevertheless has all the makings of a great watch with its precise Swiss Made automatic movement.

For a comfortable and secure fit, the two editions of the Predator come with a vulcanised rubber strap closed by a folding clasp.