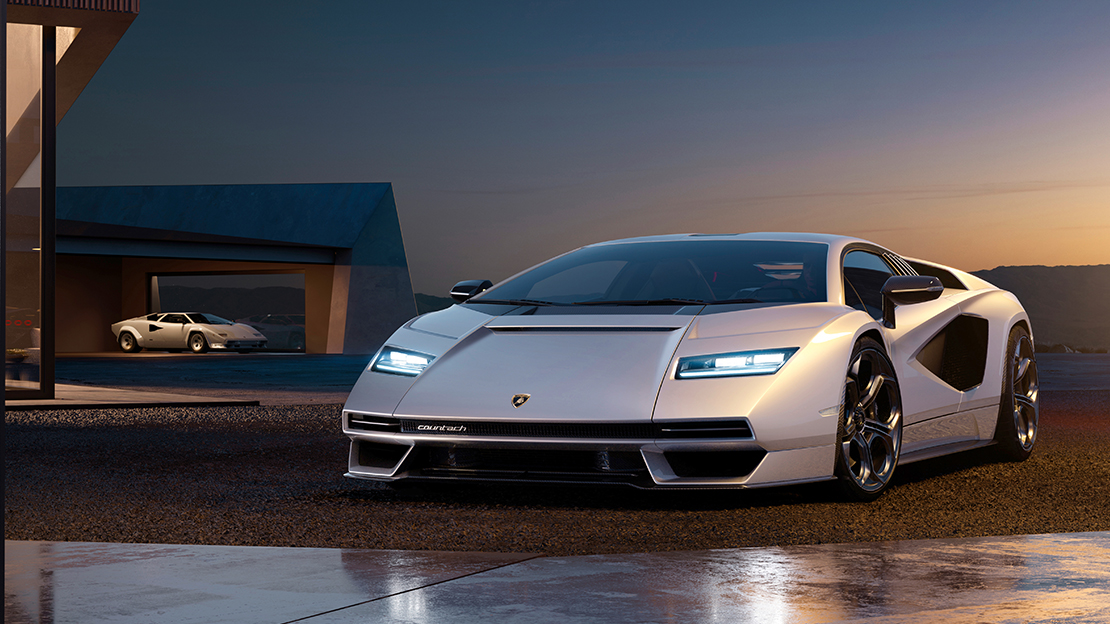 Very fitting. Lamborghini chose The Quail as the place to launch the new Countach. The Quail, to serious car enthusiasts and collectors, is technically The Quail: A Motorsports Gathering, USA at Pebble Beach. Quite the place to celebrate 50 years of perhaps the world’s most important poster car.

The Lamborghini Countach came into the world like nothing else, sharp-edged and straight-lined and roaring. Many think of the huge wings and the flared bodies as the key points, but in reality the first car was clean and sleek even while it was ground-breaking. The new LPI 800-4 draws more from the cleanliness than from the added-on wings. In particular, Mitja Borkert, Head Of Centro Stile, brought forth the elements of the first LP 500 prototype and LP 400 production version cars, and the Quattrovalvole edition.

Key design points of the LPI 800-4 that nod to the earlier cars include the grille, the super slim lines and the lights from the LP 500. The Countach writing makes an appearance as well. The shark gill air intakes are there, with the air scoops integrated into the flowing lines of the car. No big wings here, The NACA ducts are there, cut into the sides and the doors out in a far sleeker manner than fifty years ago. The legend of the periscopio is there as well, that channel that actually allowed a driver to see behind him with a mirror. It lives on though differently, in the lines that run through the roof towards the rear. You see them best from above.

Remember though, as much as the Countach was a visual feast it was also a technological marvel of its time.

The new car takes its name LPI 800-4 from the Longitudinale Posteriore mounted powerplant that produces the V12 experience and sound and produces 780hp. The I stands for the hybrid technology developed for their Sián, with an electric motor that produces 34hp. That totals 814hp as maximum combined power, and the 800 just rounds that down. The 4 denoted that permanent four-wheel-drive takes that power out to as many corners as possible.

The monocoque body of the new Countach and all the body panels are of carbon fiber. Exterior carbon fiber features are visible, but the launch car unveiled at the Quail is in the dedicated color Bianco Siderale. There’s hint of pearlescent blue that nods the Countach LP400 S of Ferrucio Lamborghini himself. The interior takes design cues from the original, but within the context of a modern car as does the whole car itself. Luxurious leather features geometric stitching on the specially designed seats.

The new Lamborghini Countach LPI 800-4 is a celebration, but not just a celebration of a car. It is not just an homage to a model. It is rather a celebration of the spirit that created the marque and the car. Details that were groundbreaking in the original are interpreted with the latest and greatest in technology and daring, as it was in the original car. You will see, hear and feel the original car, but it is meant to be as forward-thinking for today as the original was fifty years ago. The roof, for example, is photochromatic, changing from solid to transparent at the touch of a button. The wheels will look familiar, somewhat reminiscent of the “telephone” style of the 80’s but again with a more modern interpretation.

112. LP 112 was the internal project name of what was to become the original Lamborghini Countach. In what will surely frustrate collectors and enthusiasts, 112 units is also the production run.