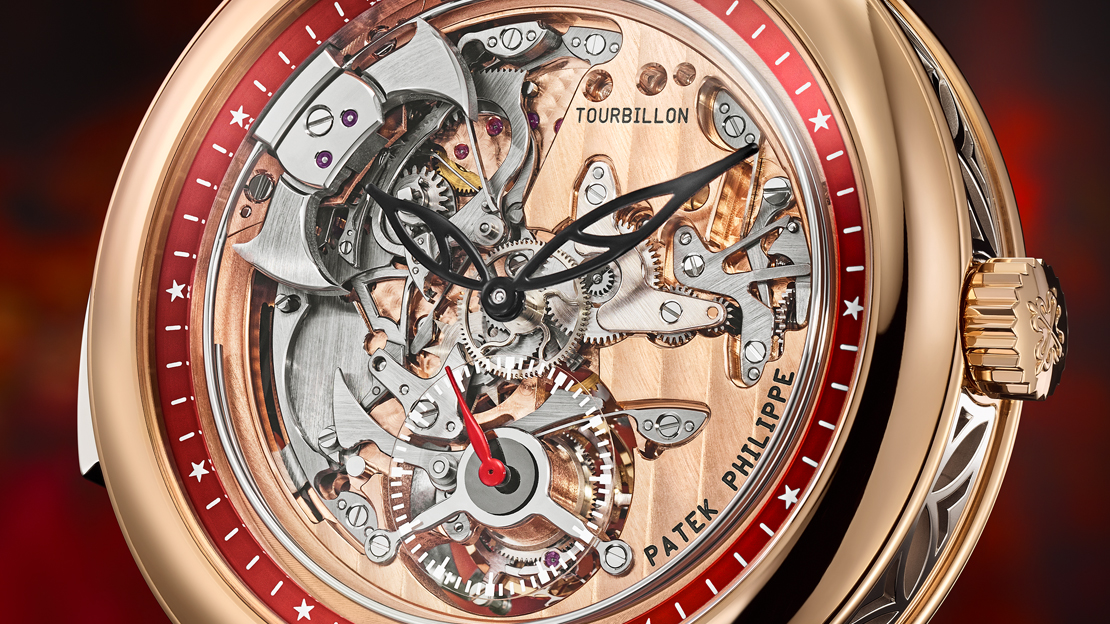 AS Singapore celebrates the two centuries since British statesman Stamford Raffles set up a trading post there (although it took until 1959 for Singapore to start its own government), Patek Philippe is rightfully recognizing the present affluence of the city-state, not to mention its consumer influence in Southeast Asia, as the watchmaker mounts its Watch Art Grand Exhibition Singapore 2019.

Just as significant, Patek Philippe has revealed a few timepieces at the event, including a “preview” example of the ref. 5303R-010 Minute Repeater Tourbillon Singapore 2019 Special Edition. This watch, which the maison bills as a piece intended for “watch connoisseurs and collectors in Southeast Asia,” will come in only 12 examples.

As a watch aimed at Southeast Asians, the ref. 5303 expectedly wears aesthetics which appeal to Asians hailing from this side of the continent — which is to say design that is not subtle at all. Patek Philippe picked its openworked ref. 5304 as the base piece, which in turn was spun off the ref. 5104 from around a decade back. The ref. 5104, it should be stressed, was widely regarded at the time as Patek Philippe’s response to a wealthy market snapping up ornate, dial-less grand complication timepieces.

But where the ref. 5304’s mechanical transparency combined a minute repeater, a perpetual calendar and a retrograde analog date — its leap year, day and month indications were displayed on sapphire crystal discs so that views of the mechanical components beneath them do not get obstructed — the Singapore-specific ref. 5303 throws in together different grand complications, namely a minute repeater and a tourbillon. But the open architecture remains. Oh, it does.

The handwound, in-house cal. R TO 27 PS powering the ref. 5303, in contrast to the ref. 5304’s self-winding movement, transfers the gongs and the hammers of the strikework mechanism to the dial side. Patek Philippe says this migration needed some 20 new components, adding onto what is already a tight fit. So the additional height brought about by the rearranged gongs and hammers was partly offset by the absence of a watch dial. Still, the inner sections of the hammers, those facing toward the center of the watch, had to be trimmed a bit so these would not interfere with the hour hand when this reaches the 9 o’clock to 12 o’clock position. The gongs are attached on the inside of the caseband. The setup, Patek Philippe says, works well in the ref. 5303 as it improves the minute repeater’s notes.

Also used in a handful of Patek Philippe minute repeater tourbillons, the cal. R TO 27 PS as seen through the caseback cover is a little more restrained. On this side the movement flaunts the Geneva striping and perlage and mirror-polishing and few other handcrafted touches but, because it is dominated by bridges and a plate, the look is less complex compared to the calibre’s dial side. The 48-jewel cal. R TO 27 PS beats at 21,600vph and has a 48-hour power reserve. It is quite accurate as well; Patek Philippe says it should lose no more than two seconds, or gain a second, in the course of a day.

The strikework bits are not the only ones flaunted on the watch. Also visible from the dial side is the ref. 5303’s tourbillon — a rare touch on a Patek Philippe given that the maison usually exposes this balance mechanism only through a window on the caseback, never on the dial. The reason for this is that Patek Philippe believes exposing a tourbillon to sunlight will only prematurely age its lubricants. With the ref. 5303 though, what Patek Philippe did was coat the sapphire crystal covering the dial with UV protection.

Certainly, all this is peacocking. And not pulling back any less are the furniture over the “dial.” As noted, the ref. 5304 from which the ref. 5303 was spawned is not a subtle proposition, and the ref. 5303 gets the fancy openworked hour and minute hands, as well as the chapter ring which served as the pointer date indicator in the ref. 5304. In the ref. 5303, this part turned into a decorative minute track rendered in red-lacquered sapphire crystal, over which white minute indices and the stars, found in five-minute increments, reside. The touch simply pulls together the Asian-flavored aesthetics of the watch, as well as hint at its Singaporean identity — the country’s flag is a red-and-white affair with five stars and crescent moon on it. Echoing this red element is the red hand for the small second subdial over the tourbillon.

The case of the ref. 5303 (identical to the ref. 5304) is a 43-millimeter-wide, rose-gold example of Patek Philippe’s mastery in finicky decorative techniques. The watch’s beefy bezel is matched by equally large casebands and lugs. Found on the casebands and lugs are white-gold intarsias adorned with hand-engraved arabesques and latticework. The slide that actuates the minute repeater is made from white gold as well. Finishing the décor is a black alligator leather strap with a contrasting stitching in — you guessed it — red.