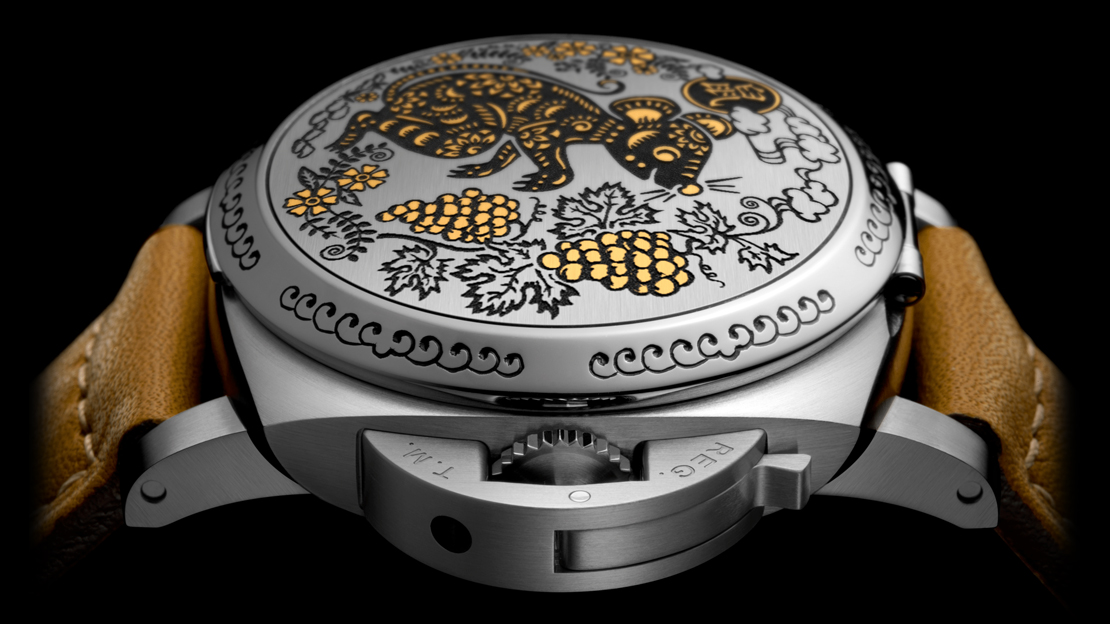 For Panerai, the tradition of creating a special watch (limited to 88 pieces) for the CNY began in 2009 with the Year of the OX and the start of the 12-year Chinese astrological zodiac cycle. Fittingly, this is also the twelfth Panerai Sealand Year of the Rat special edition and completing all twelve animal zodiac symbols representing Chinese astrological tradition. Chinese Tradition celebrated with Italian craftsmanship using the ancient art of Sparsello nonetheless. Sparsello is a technique whereby layers of gold are repeatedly applied to a pattern gouged out from steel. Named after the tool – say for example a little scalpel used to make the incision where the gold threads are inlaid, the intricate watch decoration can take up to fifty hours to complete. This Panerai Sealand 44mm case cover uses brushed AISI 316L stainless steel and is hinged at the 12 o’clock. Like other Sealand models, its distinguishing feature is a signalling mirror inside the caseback.

The mechanical movement of the new Luminor Sealand – 44 mm is the P. 9010 Calibre with a power reserve of three days provided by twin spring barrels, and rapid time adjustment which also changes the calendar. With automatic winding and only 6 mm thick, it was entirely conceived and developed at the Panerai Manufacture in Neuchâtel. Water-resistant to a depth of 10 bar (about 100 metres), the new Luminor Sealand – 44 mm is fitted with a semi-matt calf strap, gold in colour with beige stitching, and it is presented in a pear wood box. It is supplied with a second strap of black rubber, a special tool for changing the strap and a screwdriver to remove the buckle.

With the Year of the Rat officially commencing on February 11, 2020, my it bring you prosperity and bountiful blessings the whole year round!

By the way, you can still read Brian Afuang’s article on the 2019 Panerai Sealand Year of the Pig here on our website.